King v. Facebook 19-CV-1987 Memorandum in Opposition to Motion to Dismiss: Facebook and Counsel Denigrate Negroes and Retaliate Against Dissenters. 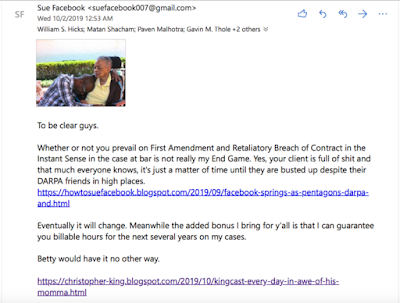 I the undersigned being first duly sworn, solemnly aver as follows:

1. I have read the Declaration of Facebook Counsel William Hicks in which he decried my affirmative statement that my end game – much like that of U.S. Senator Elizabeth Warren and many others – is to see Facebook regulated and its speech policies changed;

2. I did not make any misstatement of Law or Fact in my email to him in which I also stated that in my opinion, Facebook is “full of shit;”

3. However, I note that said Counsel in one fell swoop issued a material misstatement of Law and Fact to me when he stated on Thursday, 2 May 2019 that I had engaged in “frivolous” conduct that required me to pay Attorney Fees in the State Court case out of Seattle prior to initiating suit in this Honorable Court. He wrote:


It is premature at this time to engage in a Rule 26(f) conference, especially because you still have failed to pay the judgment entered by the King County Superior Court as a sanction for your frivolous motion practice in that case. You should pay the outstanding judgment in Washington before proceeding with a substantially similar case in California.

4. There is no precept of Law requiring me to pay anything on that case prior to filing in this Honorable Court;

5. Further, there was no Finding of Fact or Law that I engaged in any “frivolous” conduct whatsoever;

6. As such, I view this conduct as yet another extension of Defendant Facebook’s ongoing corporate culture of abuse against dissenters, particularly but not limited to black dissenters as exists on the Campus and on the Platform according to the Party Admission of then VP of Diversity Mark Luckie as well as last week’s anonymous statements by current blacks at Facebook as noted in the USA Today that is addressed in my Memorandum in Opposition to Facebook’s Motion to Dismiss: Denigrate the Negro is their modus operandi.....[SNIP]

And I'm the one who is allegedly frivolous or abusive?  Bullshit.  I'm not misstating obvious clear-cut law or facts but Facebook Counsel sure as hell did.

Much more to follow Wednesday evening, 13 November 2019.
Posted by Christopher King at 9:47 PM