KingCast Oral Argument to Slam Facebook on its 12(b)(6) Motion to Dismiss the Fraud, Racism and Breach of Contract Lawsuit. 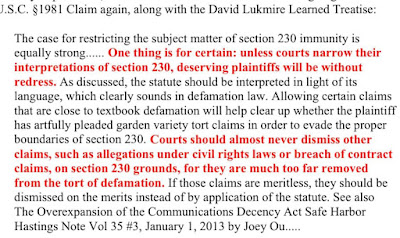 Yah. I'll put it right on out there because I am completely transparent, unlike my opponent.


May it please the Court:

Defendant has continued to attempt to play this case off as just another content-based claim that should receive short shrift from this Honorable Court.

Nothing could be further from the Truth.

To wit:  This is the first case of its kind that has a Party Admission from Defendant’s CEO with French President Emmanuel Macron that his company needs to be regulated on hate speech. Almost all of my suspensions were based on purported hate speech.

To wit:              This is the first case of its kind to incorporate actual claims of viable systemic Civil Rights issues against Defendant by 77 Civil Rights, media and legal associations including a boycott by the Country’s oldest Civil Rights Organization, the NAACP.

To wit:  This is the first case of its kind to incorporate legal tools of analysis provided by legal scholars including a Facebook Amicus lawyer that provide a legal framework for this Court to help regulate Defendant without engaging in imprudent Judicial Activism.

As such, your Honor, let us turn to the Learned Treatises of Attorneys David Lukmire and Ryan JP Dyer, with Attorney Lukmire first:

http://migration.nyulaw.me/sites/default/files/upload_documents/NYU-Annual-Survey-66-2-Lukmire.pdf
Second, before deciding whether an online entity is immune because of the type of entity it is or the type of role it played in disseminating illegal content, courts should consider whether section 230 should apply based on the theory of liability advanced by the plaintiff.

The case for restricting the subject matter of section 230 immunity is equally strong...... One thing is for certain: unless courts narrow their interpretations of section 230, deserving plaintiffs will be without redress. As discussed, the statute should be interpreted in light of its language, which clearly sounds in defamation law. Allowing certain claims that are close to textbook defamation will help clear up whether the plaintiff has artfully pleaded garden variety tort claims in order to evade the proper boundaries of section 230. Courts should almost never dismiss other claims, such as allegations under civil rights laws or breach of contract claims, on section 230 grounds, for they are much too far removed from the tort of defamation.

This Court has previously hinted at the notion of a Contractual Bad Faith Breach in this type of litigation, and Plaintiff has argued not only about his account suspension in the first place, but as to how he was treated in the requested review of his suspensions as well, such as waiting two whole weeks for an update out of a four-week suspension. It’s ludicrous.

Accord Ryan JP Dyer Your Honor:

Turning the tide against a lawless no-man’s-land on the Internet starts with a reexamination of Congress’s intended scope of immunity and the implicit preemptive effect of section 230. Beginning with the presumption that Congress did not intend to preempt an entire field of traditional state police power, and after closely examining the textual components of section 230 as well as the legislative history, it soon becomes apparent that immunity is only applicable in a specific set of circumstances. In applying this analysis, courts could incorporate some form of objective bad faith determination to distinguish between websites that are furthering the purposes of section 230, as opposed to those that are merely posing as good Samaritans.[1]

Once again note the Good Samaritan issue because Plaintiff and scores of blacks have argued that Facebook is in no ways being a Good Samaritan in this case because our discussion of racism does not connote hate speech by any plausible objective – or even subjective – standard.

The time has come for Mark Zuckerberg to get his wish Your Honor: This Court can help start the regulation effort by declaring that the words that Plaintiff has used to describe being quote “treated like a nigger” simply do not denote or connote hate speech as defined by Defendant itself in its Terms of Service and in its training and policy materials.

In sum Your Honor, the Court and everyone watching can see that we are already well past a 12(b)(6) Motion to Dismiss. These are clearly issues for a Jury to determine.


[1] Again, in case Defendant missed it, Plaintiff is arguing that Defendant is not acting in Good Faith in general, nor is it truly a Good Samaritan.

Posted by Christopher King at 9:10 AM