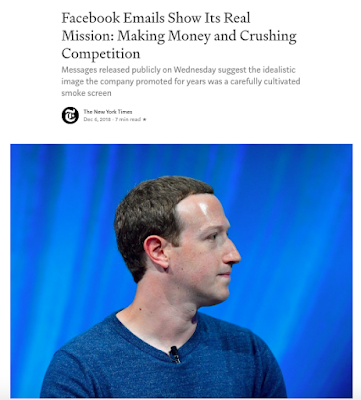 How I missed this in December I have no idea.
Well there was PLENTY of other bad news breaking on them
at the time that much is certain.
It's because they are corporate scum. 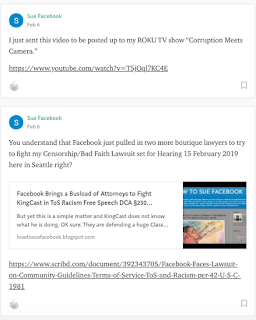 Today's New York Times Medium feature hardly comes as a surprise to me. But the timing is epic as I finish my First Amended Complaint this evening. I've known for the past couple of years now that Facebook is nothing more than a bunch of privileged, racist low-life scumbags preying on the general public for corporate gain while suppressing the speech of people selected by their culturally hegemonic value systems.

Related:  Facebook adds two more boutique lawyers to defend KingCast v. Facebook. I had told them "Fine. You can bring a busload of attorneys for all I care."

But they need to arrive at Court very early. Space may be at a premium.  And oh, I'll be selecting a videographer on Friday during my lecture series with Shoreline Community College Film Director Tony Doupé.

You won't want to miss this one folks.


It should not come as a surprise that Facebook — a giant, for-profit company whose early employees reportedly ended staff meetings by chanting “domination!” — would act in its own interests. But the internal emails, a rare glimpse into Facebook’s inner workings, show that the image the company promoted for years — as an idealistic enterprise more dedicated to “bringing the world closer together” than increasing its own bottom line — was a carefully cultivated smoke screen.

These emails reveal that in the formative years of Facebook’s growth, the company’s executives were ruthless and unsparing in their ambition to collect more data from users, extract concessions from developers and stamp out possible competitors. “It shows the degree to which the company knowingly and intentionally prioritized growth at all costs,” said Ashkan Soltani, a privacy researcher and former chief technologist of the Federal Trade Commission.

Facebook Faces Lawsuit on C... by on Scribd
Posted by Christopher King at 4:30 PM