READ THE 20 DECEMBER LAWSUIT UPDATES WITH AFFIDAVITS AND MEMORANDUM IN OPPOSITION TO SUMMARY JUDGMENT RIGHT HERE. 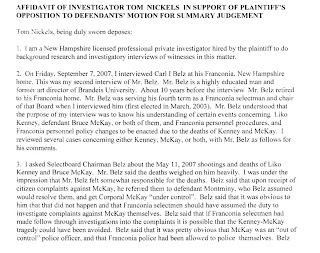 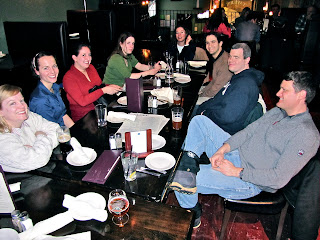 29 May 2011 update: Folks all over the Country are watching.


Dig the new short video on the fact that Bruce McKay and Officers Ball and Cox violated Liko Kenney's First and Fourth Amendment Rights back in 2003. While Casey Sherman and I disagree on that, the fact remains that Retired Franconia/Sugar Hill LE Bradford Whipple and I both agree, and Casey Sherman has in fact:


a) not attended law school.
b) not graduated from law school.
c) never been a State Assistant Attorney General.
d) never successfully defended a traffic stop criminal case with LE violence.
e) never filed and prosecuted a case against LE for traffic stop violence.
f) never got two police adjudicated as making his client the victim of violent crime.


I have done ALL OF THAT. State v. Isreal, Isreal v. Rhodes & Hensley (Ohio Court of Claims V96-61481) so yah, somehow I think I might know a Good Bit more about what makes a traffic stop Unconstitutional, and Liko Kenney told Bruce McKay "you cannot keep me here without good cause," not to mention the FACT that Littleton Judge Peter Cyr slammed other cases because:


a) you cannot block egress without probable cause
b) being in a "suspicious place at a suspicious time" fails Terry v. Ohio test.
*****************
So on the way to "The Fighter" last night I engaged in a rather telling conversation with some folks at the Boston Chapter of Drinking Liberally. As to "Bad Blood: Freedom and Death in the White Mountains" the following colloquy ensued:


"So yah, I helped Casey promote the book on my journal pages when he sent me the cover art and notice of his events."

"I'm from New Hampshire and I remember that case.... I know someone who worked for her.... she covered everything up."

Indeed she is and indeed she did. At least for now until Casey and Dorothy's movie comes out, hahahaaa.... for now read up on what I slipped Casey about Floyd that NH AG cum U.S. Senator Kelly Ayotte tried to hide until I came along. As to The Fighter, it's a small World because one of my wireless colleagues used to practice at Dicky Eklund's gym. Anyway as to the movie itself it is stellar for several reasons. It is a campy but poignant, polished yet raw view of American inspiration, perserverance and disfunction with a decidedly engaging soundtrack. The Breeders have always been a favorite, and ARS running "So into you" when Micky Ward pulls his gal was a hoot; Whitesnake's "Here I go, again" is an apt choice for a theme song. And oh, as to Lowell, check below the fold to see that folks in the City of Lowell now know what a monumental liar Kelly Ayotte really is. I wonder if those are some of the Eklund/Ward posse picking up what I'm putting down.....

I watched the line between direction and production carefully and I must say the entire package works well, in fact I might call the production lavish at least. Now I don't know what kind of budget Aufiero has for the Bad Blood and I don't even know if my character appears in the movie as I do in the book. What I do know is that with the kind of hits I am receiving on my journal page, she would be well-advised to be truthful about Kelly Ayotte covering up for Greg Floyd as well as her coverups for Bruce McKay, who undoubtedly violated Liko Kenney's Constitutional Rights in January, 2003 over at Fox Hill Park, see the new top video (coming tonight).

The locals and I will be arranging a gathering, most likely at the Bethlehem theatre to highlight our concerns. You can just about see the theatre at 2:10 of this Triumph movie. As the 16 April, 2008 email from me to Casey indicates, I encouraged him to pursue a movie about this because he is a relatively well-known writer, well he did more than pursue, he obtained and on a larger scale than anticipated. Check the comments section for that.

Related: Watch the opening KingCast movie Franconia 5/11: Injustice on Stilts to see what the locals told me about Bruce McKay when I went up there for my first non-skiing trip to Cannon in 2007..... "He was a bully...." and "if it hadn't have been Liko Kenney it would have been somebody else...."

Posted by Christopher King at 10:19 AM

Yah Man let's get some loot to do this.

We will be given Red Carpet lead feature status. Dig Trent's guitar work in the first link. What a badass.

That loudmouthed ignorant jackass "Sophie Bean" has entered the room now over at Mr. Renner's Maura Murray website and has once again attempted to trash talk me like her buddy the welder posing as JAG Attorney Bill Christy and the whole merry band of pranksters:

I responded as follows and waiting for the post to update:

This is what I just posted:


Sophie Bean I advise you to take your little undocumented diatribe away from here as no one has found one material misstatement I have ever made in ANY of my investigations into North Country matters, and I along with dozens of others, including statesmen who wrote and supported me, successfully addressed the NH House and Senate on the Bruce McKay road bills.

Unless or until you have something specific to say I suggest you stop staining this board. That is as polite as I can be to you, no one has ever successfully challenged anything I have said as a journo since I wrote for the Indianopolis Star 22 years ago my friend.

I just want to say that u speaking to those people in that room about why a road should not be named after that poor excuse of a police officer was amazing! U should be very proud of yourself man!! I know I am!! I just spent 5 hrs. Looking over this tragedy today. I'm for Liko all the way!! Keep up the good work my friend ;)