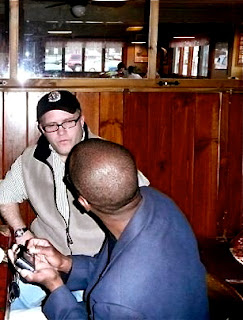 Photo of Casey Sherman and Christopher King, J.D. by M deRham at Gregory Floyd's conviction for criminal gun threats against his neighbor Alma Jean Boisvert, 15 April 2008.
Above is the video in which, inter alia, Casey Sherman states: "I'll give you a synopsis of why I wrote the book and then I'll open it up to these two gentlemen who really worked the case," i.e. Bradford Whipple and me, KingCast.net

Fact: At Fox Hill Park Liko Kenney was not committing any visible illegal acts, and he asked for back up because "I do not trust this officer." When McKay called for backup two cops -- Cox and Ball, no kidding -- showed up and beat the piss out of the kid. And Bruce McKay lied in his narrative, stating that he gave Liko Kenney his name when Liko asked for it, but he did not, I have watched all the video. And McKay hated the Millers and Kenneys, had their tennis camp vans checked as if they were stolen. Casey said that Liko acted like a punk, but Bruce McKay was a punk with a gun and a badge, a rogue cop if ever there was one. McKay's own peers, firefighters from Franconia, complained in writing that they were scared of him.

Here's Bruce McKay's legacy post, some docs not hosted but I have them.

Look: I am a former Law Enforcement Attorney myself and I don't hate Bruce McKay but I do hate the kinds of things that he did, including threatening firefighters, the knife to Ms. B's privates that Chief Montminy ignored (and even the day he died, violating 7 OC Spray and pursuit policies) and that is why the North Country has spoken and that is why the House previously agreed, and nothing --- I repeat nothing -- has changed.

Here's the fact that Bruce McKay's practice of detaining Liko Kenney was  held Unconstitutional by Judge Peter Cyr, himself a real hard-assed conservative. Bruce McKay had absolutely no reason to detain Liko Kenney without Probable Cause and he had none, Liko Kenney told him that but Bruce kept on.
Here's  the lawsuit generated since two World-class lawyers, Harold Burbank and Charles O'Leary read my work. I'm a former AAG who has won Civil Rights cases in private practice.

Here's  the video in which Casey Sherman notes that he could not have written the book without my help, also see the above movie, "Bowfinger or Bad Blood." I have a series of online movies made in Franconia about this tragedy, interviewing town people, like this one. Here's a good Google Page.

Here's the  journal entry in which I note that Casey Sherman gave me the cover art for the book before anyone else, for publication and promotion.

Here's what Casey Sherman said about Bradford Whipple and KingCast  in the book.
Disclaimer: I have no horse in this race except that the Truth be told. I have not been consulted or paid for any commentary or research on this movie. Casey Sherman's book does however laud my efforts and those of retired Franconia and Sugar Hill LE Bradford Whipple, who took Casey to Liko Kenney's car (actually it belonged to his father Davey). Bruce McKay had far more complaints than major press allowed, and he violated protocol on pursuit and OC Spray over an expired inspection sticker, but the town knew of these propensities in files that the attorneys will be bringing forward, along with Bruce sticking a knife toward an innocent female's privates for no lawful reason. There is a reason why the NH Legislature and Town voted no on HB 1428 and SB 154, failed attempts to name a roadway after him.

Posted by Christopher King at 4:56 PM

Something has to be done about this state and I am doing everything I can to bring them before a Federal judge. These boys are crazy and they are going to pay the price......

I know right, and it goes all the way to Kelly Ayotte and Judge Landya B. McCafferty's former boss Jack Middleton, who is a complete liar, watch him Gerrymander my Civil Rights Complaint and flat out lie about what I alleged.

And Brian Cullen is doing the same damn thing, sadly.

I kind of like the guy and even invited him for tennis, but apparently he's playing the same dirty pool, the phrase when somebody stole a point from you on a bad line call when we were juniors is "he hooked you."

If you have an argument against me, then cite what I really said then defend it.

But don't cite 1/3 of what I said, then postulate your position on the 1/3 that doesn't damage you as badly.

This is why people hate lawyers and say they are full of shit. This case is symbolic of all of that.