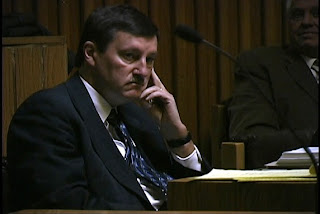 In a telephone call that ended just 15 minutes ago that I told NH Supreme Court Discipline Attorney James DeHart was being recorded, he informed me that my Rule 3.3 Ethics Complaint against former NH AAG Dan Mullen is "very active, and letters will be going out soon."
Whether those letters are of dismissal or of further investigation notice remains to be seen, but as soon as I know, you will know. Here's your background post on Dan Mullen and his erstwhile boss, former NH AG cum U.S. Senator Kelly Ayotte, that dude told some serious material lies on me, then lied yet again during the investigation.

The following facts are not in dispute. Warren J. Billewicz, father to Lillian Billewicz (Lillian) and grandfather to Lillian's sons, Johnathan and Michael Billewicz, died on November 6, 1989, leaving a substantial fortune. Attorney Robert W. Billewicz, Warren's son and Lillian's brother, was appointed trustee over several estate trusts, with Lillian and her sons as beneficiaries of five of the trusts. Lillian [*2] was suspicious of the will and trust documents produced by her brother, and in 1998 sought to have him removed as trustee. In January 1999, the probate court appointed Attorney John C. Ransmeier of Ransmeier & Spellman, P.C. to serve as Interim Trustee of the five trusts.

In August 2001, the plaintiffs, with independent counsel, filed a petition to reopen Warren Billewicz's estate, alleging Robert Billewicz had forged the will and trust documents. In the trial structuring order, dated March 22, 2002, the probate court ruled that Attorney Ransmeier, as the Interim Trustee, “need not actively participate in the hearings on the merits and motions” relating to the petition. The probate court further outlined the parties' agreement that Attorney Ransmeier's lack of participation did “not constitute a breach of any standard of conduct in fulfilling the trustee's fiduciary obligations to the various beneficiaries.” On August 11, 2005, the probate court ruled that the will and trust documents were fraudulent and imposed a constructive trust upon the assets of Robert Billewicz, his trusts and the Warren Billewicz estate, for the benefit of the plaintiffs.