Oh, boy....  Project on Government Oversight (POGO) is reporting as well, and they note in this 10 Dec. 2010 feature that the Feds are investigating throughout the Country, with more to follow. They will wind up in Columbus, Ohio if they really care about Justice and accountability because we've got the Department on video admitting price fixing.


R.I.C.O. Sauve.....Watch the second video from Justiceforkids first. In it, a Columbus Public Schools financial officer admits that NCLB SES providers are indeed Price Fixing exorbitant rates, often more than $100 an hour, for services. My former client Jerry Doyle and I have lawfully assembled with many others to raise consciousness and awareness regarding fraudulent activities (like Sherry Bird long diverting $200K to her hubby's company) at the Columbus Public Schools, and other shady practices at Columbus City Hall, as noted in the top video.

But now the people at Justiceforkids.net and at Dekalb County School Watch journal are highlighting some serious issues when it comes to millions of taxpayer monies being spent for No Child Left Behind (NCLB) Supplemental Education Service (SES) providers. The Dekalb entry takes a "fill-in-the-blank" approach to show that their situation is the same as the Columbus situation. It's heinous and the Federales need to roll in there and start putting people in handcuffs. If they don't we will all recognize that they are part of the problem and not the solution. 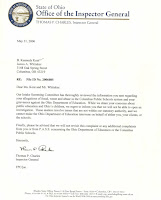 Speaking of problems, the Ohio Inspector General Thomas P. Charles (does he even have a college degree for Pete's sake his bio didn't say so) doesn't want to hear any, so he wrote Justiceforkids and told them they can't issue any more complaints, ever. Wow. Did somebody say "Substantive and Procedural Due Process lawsuit?"
Well not in Ohio, because just as in New Hampshire, if you buck the system as a lawyer you will pay in one way or another. So we're gonna' go underground on 'em with Citizen Media. There's more than one way to skin a cat.
Meanwhile the Columbus Dispatch reports of some wicked infighting between Board Veep Stephanie Groce and Supe Gene Harris, who got a "No-Confidence" vote, remember that? I do. KingCast, June, 2006.
As a former AAG, someone who drank the Kool-Aid and believed in government, I am appalled, the people of Columbus, Dekalb County, and all across America (Daily Kos 2005 "Corner Schools" feature) are going to join together in righteous indignation and demand
accountability from our Elected Officials and corporate citizens, and I am going to get it all on video, just as I started with Tuesday's "Can't find the note or mortgage holder" pinball wizard foreclosure hearing before newly-minted NH Supreme Court Justice Robert Lynn, who  punted it down the hall.  Watch how horrible this guy and newly-minted Chief Justice Linda Dalianis are at the KingCast NH Executive Council confirmation hearing movies.Here is the public records request sent to Columbus School Board.
Here is some of my email chain with Purchasing Director Dennis Carney 614-365-5820.
The Deal is this:
3213.3

FINANCE, BUSINESS, AND NONINSTRUCTIONAL OPERATIONS
A manual shall be maintained which includes, but is not
limited to, procedures for outside purchasing, internal
requisitioning and distributing, and internal and external
auditing.
Carney (what an appropriate name for this freak-show we're watching) says that there is no manual on dealing with this issue with these specific procedures, or more accurately he says the grid is the manual.

The manual is the one-page Purchasing Requirements Summary that was attached to both of my previous e-mails. The summary is easy to use, very concise, and has been used by the district for about 8 years.


There is a purchasing grid chart you can see in this Columbus Free Press story. Whatever the case, he contradicted his Assistant Treasurer who said that blanket PO's have a different process than the regular PO's, and he can't get around the fact that Mr. Carney's own staff admitted price fixing. Bring on the cuffs and send a pair on up to Commissioner Mary Jo Kilroy's Office while you're at it. Watch her evil "arrest 'em all" attitude in the First Video. We used to hang out, and she used to be chill with Bob Fitrakis at the Columbus Free Press, now she's gone to the dark side.
Posted by Christopher King at 10:20 AM

Mr. Charles is a board member and past president of the Ohio State Highway Patrol Federal Credit Union and a board member of the After School All-Stars. He is a member of the Ohio Investigators Association, the Ohio Troopers Coalition, and the Executive Board of the Association of Inspectors General. He is a graduate of Penn State's Police Executive Management School, the Secret Service's Dignitary Protection School, the Ohio State Highway Patrol Academy, and completed a program of study with the Association of Inspectors General Institute. Mr. Charles also attended Youngstown State University, Penn State University, Central Ohio Technical College, and Lakeland Community College.

Arnie Schropp is originally from Mansfield, Ohio. He attended Ohio State University and North Central Technical College, where he earned an associate degree in Criminal Justice. Upon graduation from the Ohio State Highway Patrol Academy, he held several positions with the Ohio State Highway Patrol, including supervising a criminal investigative unit. He is a certified police instructor and has attended numerous police and investigation related schools. He has also been awarded the designation of Certified Inspector General after completing a program of study with the Association of Inspectors General -- Inspectors General Institute. Mr. Schropp retired as Commander of the patrol's Capital Operations Unit after 28 years of service and later served as an investigator with the Disciplinary Counsel of the Supreme Court of Ohio.

Thomas Charles needs to be removed. He's just a political plant and obviously believes he will never be held accountable for his actions.

That shows pure arrogance to write that kind of letter to anyone who has filed a complaint. No wonder our officials feel free to rob the taxpayers.

What happened to right to redress your grievances and freedom of speech?

The current prices, your blog and the video make it clear price fixing is involved. Thanks for making the Board aware. My plan is to ask the Board what they plan to do about it and also to make our auditor aware, who is currently auditing Columbus City schools.

I'm asking others who get this information to do the same.