So KingCast, you say the Nashua Police Department response to your complaint was cryptic.... whatever do you mean? 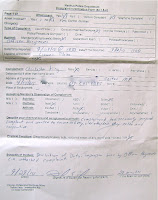 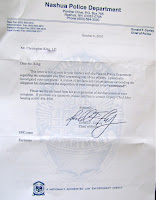 This is what I mean...... here's my two-page complaint, replete with valid legal and policy questions, andlook at the response, devoid of any rationale or reason. Bought and sold by "Do whatever you want LE" Kelly Ayotte." I guess they want to settle it in Court. Pathetic.
So I will be damned if I take any nonsense from the peanut gallery about how I was looking for a lawsuit and blah blah blah when really I was just looking to ask a U.S. Senate Candidate -- Kelly Ayotte -- a couple of questions.

Folks at Firedoglake are recognizing that the GOP's National Policy in dealing with the new media is to try to ignore or to discredit us because we don't work for large daily press, so we are not beholden to convention. When it comes to editorial content we can say and do what we want to say and do, unlike reporters and editors who have to tiptoe around sensitive issues. Witness the fact that major media never ever ran this photograph of Bruce McKay's 30' Tahoe tracks as he terrorized Liko Kenney, I look forward to the replication of that event in Casey Sherman's movie next year. 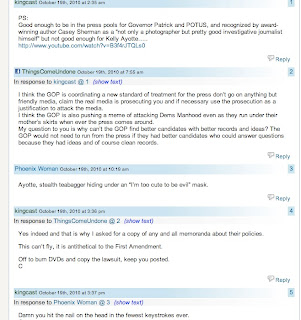 We're the face of the new media, you can slap it and we'll turn the other cheek and keep on pressing you, because we don't have to take the bullshit and the Free Press abuse. Those days are long gone so you haters will have to develop a new model... perhaps something grounded in transparency instead of insouciant contempt, like Karen Thoman, "What's your name".... "None of your business."

To hell with you, hope you enjoy your movie.

Posted by Christopher King at 3:36 AM

hello i emailed you wiht a question. update for maura murray please please??? maybe bring it back to the media? its been so long that case needs to be solved? do you know what is fred murray doing these days? is he still searching for his daughter?

i emailed you to this adress that i found on your blog kingjurisdoctor@yahoo.com

The Police Officer who answered the phone just now at 8:45 a.m. for my courtesy notice call was great:

"I just wanted to let you know I'm going to file now."