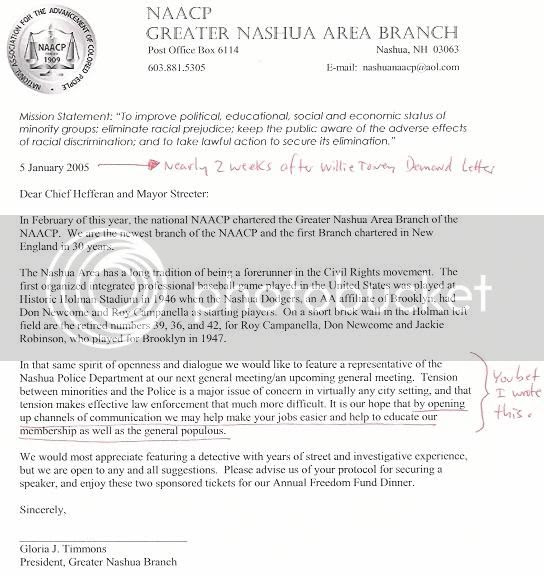 Some of you following the First Amendment beatdowns cases I have suffered as NAACP legal redress chair know that my staunchest supporters are the family of a former Jaffrey Police Chief. That's because I clearly respect good, honest police and recognize the tough job they have. The Wayne Geddes police brutality lawsuit, while stemmed at a time prior to my appointment as legal redress chair, is precisely the sort of thing that I was working to address as seen in the letter I drafted for NAACP President and liarhead Gloria Timmons, whom you will soon see hiding her face from our ever-present electronic eye. Hell, that letter alone is almost reasonable doubt in the criminal trial. Gloria, don't hide your face, honey. We don't distort anything we produce, unlike WMUR - represented by your lawyers and corporate shills Orr & Reno, running their goddamned 6-second perp walks and ignoring my press conference and lawsuit on arraignment day -- all of which we can actually see and read about at KingCast.net.

At least I kicked their ass on the First Amendment cameras-in-court ruling.
Posted by Christopher King at 11:34 PM