Note: There was a Court Reporter present so I'm stuck to ordering the
regular written Transcript and then recording the Hearing with two voice actors.
I'll get to it shortly. We have a family crisis right now
that will require travel and lots of money. But it will happen soon. 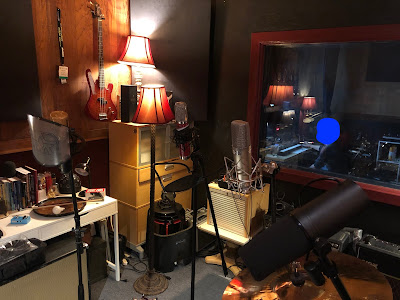 Well this video contains most of my full Oral Argument as to facebook.  I'll put the text in later today after Court. You will discover that Courts often misconstrue what I say, or ignore what I say. That won't happen now. Wait for the audio recording any day now folks. They invited me down here, well dammit I have definitely come to the Party. One thing I hate, is a Party-Pooper so I made sure to rock it. You'll see. 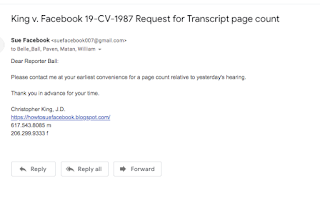 Damn. Gotta do it the old fashioned way. That's why I had requested audio in the First Place but we didn't get to that in Court. So now I gotta pay $4-6 a page depending on how fast I want it, then head to my friend's studio with two other voices and read the transcript into audio form to put it on YouTube so the whole World can hear exactly what was said, verbatim, at that hearing.

Anyway by then producing this video and sharing it in open Court whilst offering the Court the opportunity to directly follow up with questions I prevent that from happening.

When the law changes we will all say "That nigger told us so."  And I can say that anywhere I like --- except on Facebook. But white folks can call themselves crackers, which is a direct violation of the application of their purported hate speech policies as part of their contract.

Here then, is the first half:

I have some preliminary housekeeping matters:

First is the request for a full audio recording to be available on Pacer. The Court has seen by way of Defendant's own cited case that I was not heard on the McLeod case in which the Court is aware that NH learned counsel believes the Court should have allowed inspection of individual legislator's emails.

Second, I am confused by the appearance of a fourth lawyer on the eve of hearing after I had been instructed not to email him because he was no longer part of the case.

Third, there is the matter of the Judicial Notice as the USA today has written a story that directly parallels my experience of censorship. Fourth, the matter of the diligent search for information. Facebook Counsel indicates that Facebook might not be able to identify the defamatory users. My industry sources indicate that Facebook is able to do so. So I am waiting for that searchMy mother is here to watch over the proceedings.

I would like to share a moment in honor for her and for former Justice John Paul Stevens. They were both visionaries, with my mother telling me to get a blog long before it was even fashionable.
************

May it please the Court: As someone who has earned a Mayoral Commendation in New Hampshire and changed First Amendment Law in Nashua, I approach the Court will all the earnestness at my command. Just remember that we are dealing with a company that strived to be a Nation State and one which is so dead focused on oppression that they have banned my blog “how to sue facebook” but now allows me to post my own personal blog even though the content is exactly the same. You want the Third Reich, Nation State well we have the Fourth right in front of us.

Next, FB VP Mark Luckie’s observations about race are only part of the picture because in this case the emails between Counsel and the State Court will reveal that Plaintiff only filed his dismissal with Prejudice in order to run video in the Court and to Stipulate to Damages being less than $75,000.00 prior to opposing Counsel ever making any appearance.

As such, this is more akin to an Amended Complaint and that was the entire point. Further, even if the 42 USC §1981 Claims could not be litigated now because of Plaintiff’s Voluntary Rule 41 Dismissal in State Court, his comments still go to Breach of Contract, Fraud and Good Faith and Fair Dealing.

But Regardless of how the Breach occurs the Breach occurs: I just don’t get special damages that would occur under 42 USC 1981 and the Court doesn’t issue a special Jury Instruction on it. It is the same principle noted in the Daarna case -- i.e. the same set of operative facts can provide liability on several claims. There’s nothing new here and it happens in lawyering every day of the week See Darnaa, supra and Reeves v. Carrollsburg Condominium Unit Owners Association, 1:96-CV-02495 (1997)(sustaining Plaintiff’s Summary Judgment claims in a case in which a Plaintiff asserted both §1981 and regular Breach claims).

Hassell v. Bird, S235968 (Cal. July 2, 2018) is instructive because it involves the very sort of material that the Statute was designed to address per Attorney Lukmire: Defamation. Defendant’s defense in this case sounds directly as a protector under the Good Samaritan clause whereas Hassell lies directly in Defamation. The Hassell Court noted:


“[w]here, as here, an Internet intermediary’s relevant conduct in a defamation case goes no further than the mere act of publication—including a refusal to depublish upon demand, after a subsequent finding that the published content is libelous—section 230 prohibits this kind of directive.”

But in this case Attorneys Lukmire and Dyer argue for Objective review to determine whether there might be contractual or Civil Rights issues implicated.  And IBM's Director of Public Policy, the NAACP and 77 Civil Rights and media groups concur.  IBM's Hagemann:


“A measure designed nearly a quarter-century ago to foster an infant internet needs to keep pace with the enormous social, economic, and even political power that the online world today commands,” Hagemann wrote.

The comments from IBM add an industry voice to a growing list of advocates and lawmakers in Washington who support paring back the legal exemption for tech companies struggling to curb the proliferation of fake content, hate speech and election meddling on their platforms.
*******
Note: I also I argued that Congress did not intend an absurd result by enacting the DCA yet allowing Facebook to breach its contract at will, without consequences makes for what is known as an illusory contract and that’s an absurd result indeed!

The Court was definitely interested in my main argument and also asked me if I could issue another Complaint that would take a different tack then I explained about how Facebook allows me to post from my Chris King First Amendment Page blog but not from my How to Sue Facebook blog.

That demonstrates Retaliatory Breach and I can show a pattern of it. So many of their actions towards me are because I had the nerve to challenge the corporate godhead. Stay tuned for the Court Order.

Posted by Christopher King at 7:22 AM