KingCast/Mortgage Movies Year-End Recap on Attorneys Roy Moore & Mark Rattan and Kitty Catfe & Kristina Amlak: Fuck You and the Horses You Rode in On. 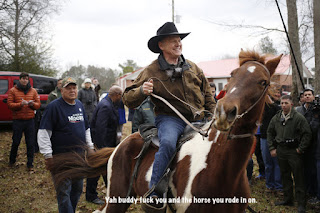 Thanks to NPR correspondent Tamara Keith for the National information. Because the Devil is in the Details.

Attorney Roy Moore and his ardent backer #45 are so far off base that even Alabama last night elected Doug Jones -- its first Democrat to Senate in 25 years. That's almost half my lifetime. Think about that. As to the horse, I actually love the fact that he rode a horse to vote. When I visited my family in Tennessee as a child we all rode horses around town. I remember learning how to ride them as a child and hitching them up, all of that. I just love horses and motorcycles. But yah, Roy Moore fuck you and the horse you rode in on, as well as 45 who has decidedly sexist and arguably racist tendencies. And yes Roy, actually your form sucks. No stirrups and you're about to choke your steed, for starters, ugh.

By the way, Roy Moore's ardent supporter 45 is next. He is an abuser of women and arguably racist.

Devil's Detail:
Reporter Keith points out it is particularly troubling that of all five Senators who initially demanded 45's resignation she is the only one he went after on twitter. And yes, she is the only woman.

What I also want to know is when will a major press person ask 45 whether he has dropped a nigger bomb since 1995 as Slate and Apprentice Producer Bill Pruitt allege. If no one else does I'll ask him if he ever winds up in Seattle. Yes. I. Will. I will be right in the front of the gallery and put it right to him. Inquiring minds want to know, because if true........  Anyway some wealthy people need to pay the reported $5M "leak fee" and get this out in the open.

Next up is Mark Rattan, another abusive white male of privilege.  He actually physically attacked my camera and me while I was lawfully assembled as a reporter to cover the Wisconsin Office of Lawyer Responsibility (OLR) lynching of Wendy Alison Nora. Attorney Nora is a white female foreclosure and Civil Rights lawyer and my background includes management of a title company and Civil Rights Jury Trial victories as an attorney so Rattan and his buddies definitely had to get me out of that hearing. Keep in mind it is basically a per se ethical violation to violently disrupt a court hearing without just cause, right. And keep in mind as you watch the video that the Hearing Officer had already ruled that I was within my Rights to run a still action camera and to take stills from a moving DSLR.

Devil's Detail:
The problem is, his so-called Superlawyer pal Terry E. Johnson failed to sign any of the responsive filings. In Wisconsin the law says (WI Stat §802.05) documents must be stricken from the Record. Johnson sits on the OLR Review Panel. So it therefore becomes obvious that this man of privilege was brought on board to curry untoward influence on the OLR...... which..... has no idea what to do in the face of being caught protecting these scummy lawyers. "Sleazy" is the word that was used in one of the filings to describe me. So yah guys, fuck you and the horses you rode in on. 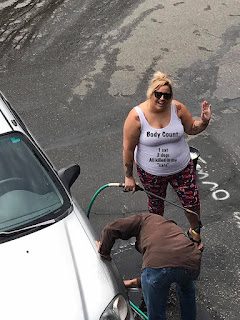 And last but not least, we arrive at Kristina Robinson. She goes by Kristina Amlak in the past year and she runs a retail rescue by the name of Kitty Catfe. She no longer runs a dog boarding "service" called Precious Paws because she left our dogs alone at her home for 45 minutes, unattended by human pack leader.  Well what's wrong with that you ask?

Potentially nothing. If it were just our two dogs. But in this case our dogs were not part of a larger pack including her 4 Pit Bulls, a family cat and 2 other dogs who were frequent visitors. Her dog Nova summarily killed Livi the Wonderdog, them both being proud bitches that they are. 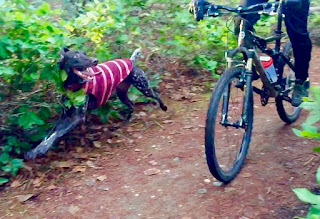 What exactly was Kristina thinking you ask?  Wouldn't we like to know. We will soon find out in Discovery after Adam P. Karp files suit next week, just shy of the one-year Anniversary of Livi's murder on 29 December, 2016. One year ago on 8 December I took my last ride with my Best Friend.

Devil's Detail:
Last spring we discovered that she wrote her other clients that "I made a choice I've made before but this time it resulted not in injury but in death."  So in other words she left dogs alone before with injury, and thought she should just go for broke now.

And in the past month I have discovered that someone told Kristina to stop bringing Nova to their home after Nova twice attacked their dogs and cornered a human being. Nova also growled at a human being the night she murdered Livi and Kristina said "that's normal." 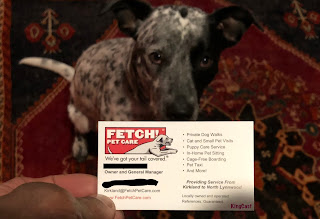 And come to find out that my perceptions were correct:  She was fired from Fetch! This from a person who currently owns her own franchise and who has firsthand knowledge of that fact.

Devils' Detail:
The City of Edmonds reduced her illegal pet fine after her dog Nova murdered Livi from $13K to $1K on "Good Faith." Where is the Good Faith? She ran an illegal kennel from 2014-2016.

Devil's Detail:
She tried and failed to get two restraining orders on me for telling the Truth about her. Along the way a racist Judge named Jeffrey D. Goodwin tried to help her though, by fining me $300 for being late to Court one day but refusing to grant me any consideration when both she AND her husband Ahadu failed to appear in Court. I filed an Ethics Complaint on him and will be appealing him to subsequent tribunals in Washington State. He already has an Ethics strike on him for his misconduct. 9 Dec. 2014 story is here.

See the comments for more information.

Posted by Christopher King at 5:28 AM

Hey #kristinaamlak #kristinarobinson #preciouspaws #kittycatfe remember the time you got fired from Fetch! for negligent care of dogs? We may need to refresh your recollection. We can do that. And I'm doing a short live feed later tonight after my shoot about this spectacle:
http://christopher-king.blogspot.com/2017/01/kingcast-mortgage-movies-and-raspberri_24.html

The City of Edmonds reduced her illegal pet fine after her dog Nova murdered Livi from $13K to $1K on "Good Faith." Where is the Good Faith? She ran an illegal kennel from 2014-2016. She lied on her application and I raised the issue of her purported resume and the City and that POS newsrag MLT News or whatever the hell it is ran away from ALL OF IT. Well folks we're bringing it right back......

We anticipate filing next week.

PS: This along with the other recent revelation that Nova was dangerous and that Kristina knew about THAT too. I think she's basically a criminal and should have been CHARGED with criminal negligence.

"Was it nova that mauled your dog?"

No coincidence you wrote me right when I saw a GSP puppy. And of all the dogs to kill she kills one owned by a dog sitter and a journalist with experience as a Civil Rights lawyer]

"Because that dog was a loose cannon
She tried to attack my dogs too and also growled at my mom
I have 2 pit bulls they are good natured they even have their CGC award
She would bring her dog over to pick kids up with no leash let her run through my house
It pisses me off because I’m an advocate for the breed. But you get someone that is irresponsible owning one ugh
And will also vouch We have no problem giving you a statement."

"The dog cornered my mom
It happened twice and I told her don’t bring her over again
She’s a sick person
Nova is a loose cannon and terrible example for the breed and my mom and I both will vouch for that
She shouldn’t be allowed to own let alone pet sit others pets.............."