KingCast Politics: A No-Bullshit Zone on Systemic Societal Abuse in America for Chi Psi, Terry E. Johnson and Anyone Else Full of Shit. 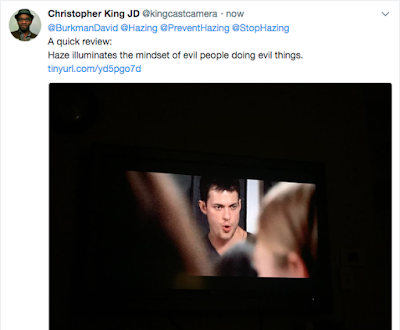 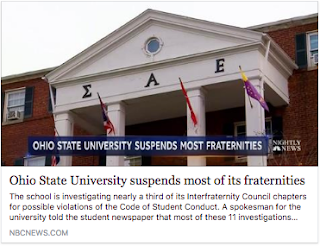 This here is what we call a no bullshit zone on two fronts:

First of all, watch Haze. It is a brilliant movie and I believe in many ways it is the most important movie of the year. Impactful and insightful from the outset (if over-edited in parts as noted by Variety) it will awaken the core of your soul, provided you have one.

My girlfriend and I were deeply moved by this movie, and keep in mind I am not generally a Frat hater. In my early 30's I had many clients at Ohio State who were Greeks, black and white. I used to kick it with them from time to time at parties and I'll admit to being no stranger to a keg stand in undergrad or then, LOL. My family has many lettered members in it. But at least at that time I did not perceive the level of reckless and disrespectful behavior to be as heightened as it is now.  Something is wrong here, and while it is difficult to explain, suffice it to say "you know it when you feel it." This is why Ohio State recently suspended so many frats, right.

Movies like Haze are important because they foretell, or perhaps describe in hindsight, sociopolitical disasters that befall our society. Many of these men and women form alliances that are echoed and preserved in high places with people of like-minded persuasion. To wit, in America the entire Trump Administration is treasonous and destructive to the Human Condition. To see the type of mentality espoused by these punks you need to watch Haze. Thank goodness for people like Hank Nuwer.

Moreover, of course Terry E. Johnson represents frat boys, Chi Psi. They claim "Respect for one's self and others...."  As if his client respected me, right.

And all of this after an Anti-Hazing video no less.

Anyway he's the well-connected lawyer defending the mouth-breathing Wisconsin attorney Mark Rattan for attacking my camera and me while I was simply shooting a public hearing. Talk about hubris and privilege, well there you go. Watch the movie at bottom. Look at Rattan put his finger in my face. Fuck you dude. Fuck. You (in honor of one of my fans, Ohio State Law Professor Christopher Fairman). You are lucky you didn't pull that shit with a real nigga' because he would have knocked your ass out, cold. And frankly, you would have deserved it.

Now then, on the second front, meanwhile Shaun Hough is a white male FB troll at times. He shows up, proclaims everything that neo-con white males do to be sacrosanct and slams who he perceives to be liberals at every turn. As to me, I equally disdain most politicians right, but the difference between Shaun and me is that I have no sacred cows. If you are a predatory abusive deceitful jerk you are a predatory abusive deceitful jerk regardless of your affiliation. 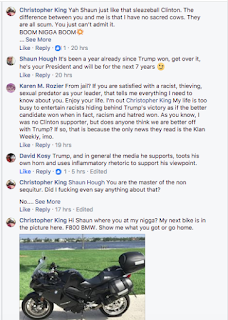 So here's the punch line: In avoiding, or attempting to avoid my larger point, he writes that I need to get used to Trump being President because he will be here for the next seven (7) years. To that I told him if Trump wins another Term I will donate my next motorcycle to the Charity of his choice. I then offered him to put up something of value since he was so bold as to make that statement. You see, not only will I call him out on FB I will call him out on this journal page because I think he is full of shit and I'm sick of it. Put up or shut up, bro.

I have not heard from him since.

Nor have I heard back regarding the Decision in my Ethics Complaint against Rattan. I'm sure Terry and his buddies are figuring out just the right way to make Rattan's conduct all my fault.

Posted by Christopher King at 4:46 AM