New York Life is appealing this. Wow. Anything they can do to fight this guy and the others, they will do. The primary issue is that they used Fraudulent documents to fight Ketler Bossé's EEOC/Civil Rights Complaint. And there is more. Much More. Federal Mediation Hearing 2 January 2019. I just might be there. Stay tuned.
Racist New York Life Slamme... by Christopher King on Scribd 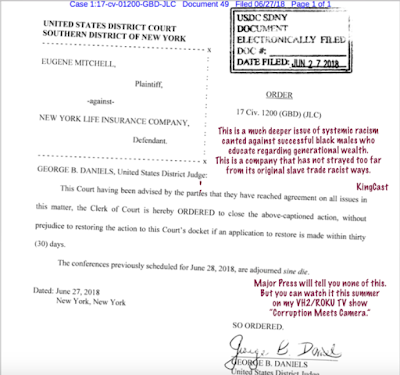 6 July 2018 Update: Eugene Mitchell lawsuit settled in Southern District Federal Court. There's more to follow though. Much more. You can follow it all right here, and pretty much only right here because mainstream press pretty much sucks. Anyway I've seen the pending litigation and these racist pigs are about to get smote right across the brow, but GOOD.

This is a much deeper issue of systemic racism canted against successful black males who educate regarding generational wealth. This is a company that has not strayed too far from its original slave trade racist ways. Major Press will tell you none of this. But you can watch it this summer on my VH2/ROKU TV show “Corruption Meets Camera.”

5 June 2018 update:
KingCast says it looks like these bigots are going to Trial. Can’t run video in Federal Court but I’ll be there. I’ll add that coverage to my upcoming TV Coverage.
Google “Lights, Camera Action + KingCast”

This case will be S1 Ep.3 Ciao. Also to Morgan Lewis' Sam Shaulson, a complete liar: Fuck you Sam. I've been waiting for years for us to meet again in one way or another, and now it's coming down to it you asshole. 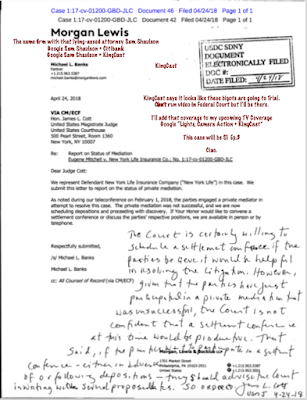 17 November 2017 update:
Some Plaintiffs opt for Protective Orders. Others will not. New York Life's ongoing racist and fraudulent tendencies will be exposed. Stay tuned. 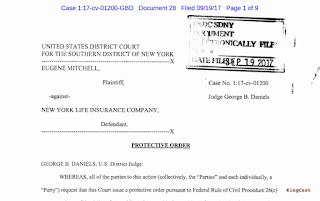 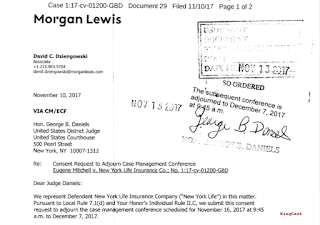 Also, Morgan Lewis lies all the time and usually gets away with it. I know, because their Partner Sam Shaulson did it and got away with it after Citibank wrongfully dishonored a check issued by another dirty lawyer, one Jeffrey Denner. The bank threatened to arrest me for no lawful reason.
http://citibankblog.blogspot.com/2010/02/kingcast-tells-citibank-lying-lawyer.html
http://samshaulson.blogspot.com/2011/11/kingcast-and-us-district-judge-jed.html

New York Life has been practicing racism in this country since the slave era. Even they had to acknowledge that much.  Every now and then there is a concession to modernity but in reality those concessions are only bandages placed on a seething wound, placed there only after inflammatory issues come to light. It is not so much their past that worries me, it is the present and future.

To the left you see cases from the late 1990's that prompted an EEOC investigation.  KingCast will be seeking the results of said investigation.

Then there was the case of Ketler Bossé I posted last fall. The "Moulinyan Moment...." See the video, above. Then now we see two more employees step forward......

Now, in the past year lawsuits filed by three successful black career employees exposes the ongoing culture of systemic racism that New York Life still actively practices. The "Racist Pig Whore" episode does not appear to be an isolated incident but rather part of a larger collective corporate culture of racism.

Below is my unanswered email from earlier this week. The phone conversation promising a return call from New York Life HR or Legal was lawfully recorded and will appear in a new video by 15 May 2017.

We have not shared any correspondence in months, but at this point I have serious concerns that the individual tiles of New York Life's corporate story reveals a mosaic of discrimination first occasioned back in the days of the original Nautilus Insurance Company when your predecessor engaged in the American slave trade as noted in your historical archives.

The problem is that since we've spoken I have discovered more -- not less -- discrimination and racism within the walls of your company.  The "Racist Pig Whore" episode just last year was ugly enough: http://www.theroot.com/new-york-life-insurance-co-fires-director-for-calling-1790856367

....but the problem is that I am now reviewing not one, not two, but three current cases of active discrimination within the hallowed halls of New York Life, as well as two reported cases that were alleged to be part of a racist corporate culture seventeen (17) years ago!

As such, one might say that these are less likely to be isolated incidents and more likely to be the result of a corporate culture or ethos that is designed to discriminate against blacks either in de facto or de jure modus operandi.

One thing in common about all three of the current Plaintiffs is that they are all concerned about establishing growth patterns for generational wealth not typically enjoyed by blacks in this Country.  I'm sure more of that will come out in the media and in the Courtrooms over the next several months, but It certainly begs the question as to how each of these successful long-term employees suddenly become undesirable and suffer career setbacks along with their minority staff.

Frankly, In my days as a practicing attorney I would have jumped at the opportunity to represent these gentlemen but I'm far too burnt out to even think about practicing law again. These days I prefer to expose abuse and refer victims of the abuse to the appropriate channels for further action while giving Defendants full opportunity to be heard as well.

I have taken the liberty of including your old foes Janet Neschis and Steven Hyman, Esq. on this email as a I prepare a second video to join the first. They have run a prior investigation that needs to be supplemented accordingly, seventeen (17) years later.  When questioned, you were circumspect and tight-lipped at that time and refused to comment:

Mr. Werfelman declined to comment on any of the individual charges. Instead, he read a statement that said:

''New York Life has a long record of commitment to equal opportunity. All job-related decisions are based on qualification and merit. We believe a full review of the facts will demonstrate that the company has conducted itself according to its policies and procedures.''

I suppose that was of course prior to settling the Boswell Bent and Marion Burns lawsuits in SDNY as noted by the thumbnails below. Both of these cases close out with sealed documents and stipulations and we all know what that means. It means it is likely that NYL attorneys saw liability for failing to conduct business according to stated and lawful policies and procedures, contrary to your position.

Be that as it may, the video will highlight the last video highlighting the "Moulinyan Moment" in New Hampshire:
http://christopher-king.blogspot.com/2016/06/the-moulinyan-moment-kingcast-questions.html
https://www.youtube.com/watch?v=6uZAy2dMm8I

...........and bring forward some of the ongoing issues manifest in the Mitchell and Sugick cases that I am certain you are now aware of.  I'll basically read this email to you as the voiceover.

I also note that I had posted several of the Ketler Bossé case documents to SCRIBD last fall but note that they have been removed. I must at this point assume that you and NYL had some hand in this.  I can assure you that I am reposting those documents, along with the new Federal cases (Sugick and Mitchell) and if I should see any tampering with those documents there will be First Amendment litigation. All of this information is public record, Sir.


New York Life History of Slavery and Racism Continues With Three New Lawsuits Ketler Bosse, Jon Sugick and... by christopher king on Scribd
Posted by Christopher King at 9:40 AM