First of all, Mountlake Terrace and Edmonds both screw people with any ounce of integrity, and current MLT City Manager Scott Hugill is part of it.

To any City Official who offers us "condolences" with no investigative action
your words are nothing more than daggers to our hearts.
Kristina Robinson gave us enough daggers to last a lifetime
so take those gratuitous salutations and stick them in an appropriate place. 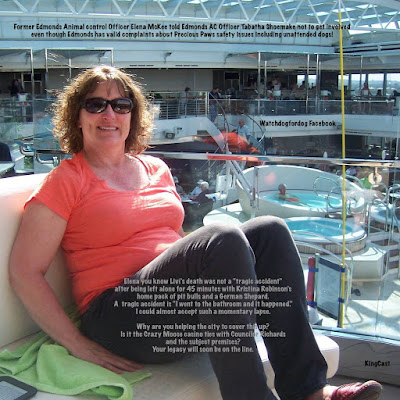 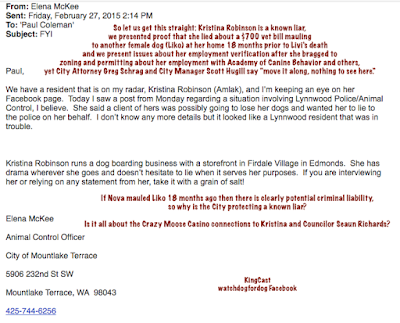 Mountlake Terrace Animal Control Officer Elena McKee
Sold her Soul to the Devil in Livi the Wonderdog Precious Paws
mauling and death at the hands of Kristina Robinson's own dogs. 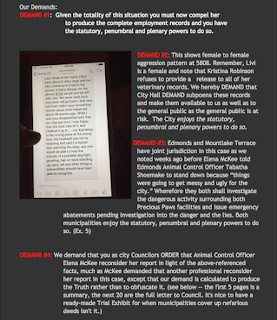 Note: Read the four (4) simple Demands put to Mountlake Terrace City Council
above and right here. They involve Kristina Robinson's unproved employment record
proved lies regarding a prior attack at her own home with 30 stitches
and a $700 vet bill for Liko,another female dog kept in the company
of Kristina Robinson's pack of pit bulls.
This city has written our closing argument quite nicely:

"Once upon a time Elena McKee cared about the integrity of the system....." 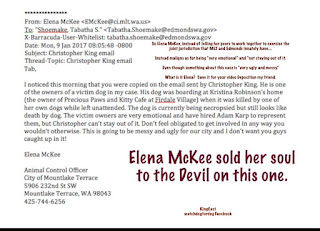 FYI Paul, We have a resident that is on my radar, Kristina Robinson (Amlak), and I’m keeping an eye on her Facebook page. Today I saw a post from Monday regarding a situation involving Lynnwood Police/Animal Control, I believe. She said a client of hers was possibly going to lose her dogs and wanted her to lie to the police on her behalf. I don’t know any more details but it looked like a Lynnwood resident that was in trouble. Kristina Robinson runs a dog boarding business with a storefront in Firdale Village in Edmonds.

She has drama wherever she goes and doesn’t hesitate to lie when it serves her purposes. If you are interviewing her or relying on any statement from her, take it with a grain of salt!

Paula, Here’s a copy of today’s posting from Kristina Robinson Amlak. She’s very obviously trying to be as antagonistic as possible and also trying to twist the whole situation into a race thing. I’ll keep an eye on the page and let you know if there is anything useful.

McKee notes that Kristina and Ahadu "are not very nice and have harassed neighbors...."
But I suppose she's still more important to the city and Livi or us, nice to know.

So from these salient observations we now reach a point where Elena McKee fabricates a "family" relationship where it was permissible to leave our dogs alone with Kristina Robinson's own pack for 45 minutes.  This in spite of common sense and the professional opinion of Emily Kilmer as submitted in this online running correspondence with City Officials, including attorney Greg Schrag, who has no Oath of Office and who hates to have his phone calls taped even though he purports to be a public servant. 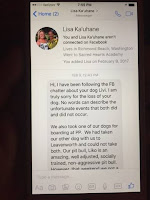 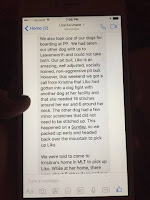 So from these salient observations we now reach a point where the City, knowing her penchant for lying, fails to investigate Kristina Robinson's biggest lie to date: She lied, before an open mic during a 4 January 2017 City Council meeting "I've been running this business for four (4) years without so much as one bite." Of course a thorough investigation may reveal that Nova was the primary attacker in Liko's case (see thumbnails) but perhaps that Crazy Moose Casino money, power and influence tied to Kristina's house, in connection with City Councilor Richard Vern Foos errr.. Seaun Richards explains all of that, as previously noted. Watch a February 2017 City Council meeting where I grill him on this via telephone.


So from these salient observations we now reach a point where City Manager Scott Hugill lies and claims that Kristina Robinson did not make employment (mis)representations in a sworn context, or that they were not issued in conjunction with a zoning application but in point of fact, her comments were indeed submitted in connection to a failed zoning application for her at-home kennel services as seen below in another thumbnail.


Read City Manager Scott Hugill's dismissive comments regarding the demands from Livi's mother (Elisa A. Bronstein) and me. My responses follow in the ellipses:

Let me start by repeating my condolences for the loss of Livi.  As a dog owner myself I certainly understand what our pets mean to us. 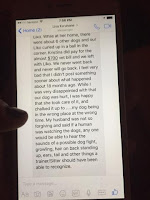 ......Spare me the gratuitous salutations. As noted in the video from today:


https://www.youtube.com/watch?v=cWgec7QL094
I wanted to follow up on your correspondence of February 21 requesting that the City obtain and provide to you information regarding Ms. Robinson’s employment and veterinary records, as well your demand that the City Council work with the City of Edmonds and have Elena McKee reconsider her report.

At present the City has no legal action, current investigation or application pending that would require Ms. Robinson to provide her past employment records to the City, and as such the City has no authority to compel her to do so.  Her representation regarding her past employment was not in connection with any application made to the City, nor were any of her statements made under any oath.  The City took no action on Ms. Robinson’s request for the City to sponsor a zoning code text amendment that involved her business, and therefore there was no reliance on these statements. 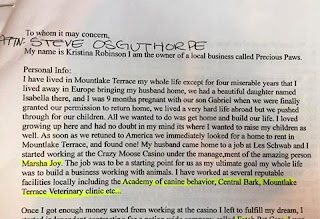 ......WRONG. It was submitted in her 2014 zoning application.  Regardless of whether the statements were Sworn she also lied to you in City Council about "4 years and no so much as one bite" when in point of fact we have Liko with 30 stitches, $700 vet bill paid by Kristina Robinson by a mauling/biting most likely at her home, and her prior statement submitted to you that "I made a choice I've made before and this time resulted not in injury but in death."..... And of course the city refused to investigate any of that. Shame on you.

......Don't insult my intelligence. The municipalities may indeed investigate jointly, as such there is, ipso facto, concurrent jurisdiction. You play me for a fool and you will regret it.

(The exception would be for Criminal conduct occurring or observed pursuant to the City’s mutual aid agreements.  Regardless, prosecution in such a matter would be handled by the City in which the crime occurred.)

......Moreover, it is entirely possible as noted in today's video linked above that if one of the dogs who mauled Liko mauled and killed Livi there sure as hell would be Criminal Prosecution.  See generally the Dangerous Dog statutes.

As for your demand that the City Council order Officer McKee to reconsider her report, the City Council is prohibited by statute from interfering with the management and administration of City personnel, and they are not allowed to direct any staff member.  That role rests with me as city manager.

....... As City Manager you are derelict in your duties because the Record clearly fails to indicate any sort of "family environment" that formed the basis for Elena McKee's fraudulent Report.  A Jury will see that later.

While I understand your requests for information toward a certain path of action, the City has determined the course that will address the zoning code violation consistent with the municipal code.  As such, the City will not be moving forward with your demands of February 21.

.....Oh, you have responded loud and clear.  We will respond to you at the next Council meeting, and subsequently in Court.

As I say, you can take your phony condolences and put there where the sun doesn't shine. You and Elena McKee, who didn't even inform us that she had Livi's collar or jacket. The hell with all of you. Yes this document will soon be published everywhere. I hope you're proud of yourselves. Livi's gonna get you.

Posted by Christopher King at 10:29 AM