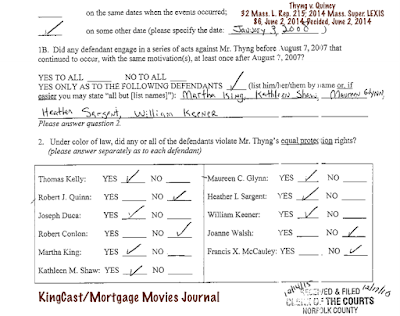 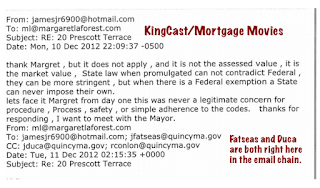 Here is your back story on how the City of Quincy, MA is putting the screws to James Berlo, a Good Man.

Re: Margaret LaForest response to M.G.L. c. 66, § 10: She withheld a crucial FEMA email to James Berlo

Yesterday at 9:51 PM
From Christopher King
To jtimmins@quincyma.gov

Mr. Timmins, Also it has occurred to me that this has the taste, feel and smell of a RICO violation. We've got several individual actors conspiring to deprive Mr. Berlo of a Constitutionally-protected right and at least one of them knowingly withholding a crucial email from FEMA that appears to be dispositive.

As such, it's not like Pelfresne, but something different. I am going to spend a little time on Lexis and likely approach the FBI as your client's answers continue to filter in. Because as you know, I'm not here to play around. 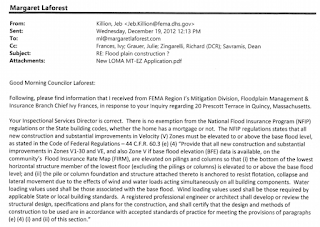 I am confused. Mr. Berlo's property is owned free and clear and was NEVER subject to Mortgage. There is no commercial use there and his building is not in a Velocity zone so why cannot he pull a permit? Further, the recent redrawing of the FEMA maps gives him

more latitude to my reading. Please see the attached journal page and video and note that the email from you to Ms. LaForest never was sent to Mr. Berlo for some reason (perhaps she was too busy at both of her City Jobs) so I am taking the liberty to do that now, in this email three (3) years later.
http://mortgagemovies.blogspot.com/2015/08/kingcast-and-mortgage-movies-say-quincy.html
https://www.youtube.com/watch?v=NJlz4YEoEF4

Note: I don't know how you would characterize Mr. Berlo as being "pleased" with anything. He says that she was hostile when she came to his house and she told his sisters in an angry tone "He only paid $68,000 for this?"  Scuttlebutt has it that she and Jay Duca had their little relationship going on and both of them stonewalled Mr. Berlo. They had a neighbor friend who wanted that property. And this was prior to the public letter she sent out stating that homeowners who own their property outright need not obtain insurance. No mention was made of any 50% rule in that letter which is replicated in the YouTube video and on my journal page. And of course she never sent that email from Mr. Killion, which effectively kept him in dark.

So then, Counselor Timmins provided the attached email chain from Margaret LaForest, who is apparently busy juggling several positions..... in a potential conflict of interest/ethical breach. But that's not before us in this request, maybe later. For now let's review Candidate LaForest's response to my inquiry by and through Counsel.

I am following up on behalf of Margaret LaForest.  She forwarded a series of emails to me that are attached hereto.  This constitutes her response to your public records request.  She has no documents responsive to the Terne Road matter, as that pre-dated her election as ward councilor.
She indicates to me that because this was a permitting matter, she wanted to work through me, and that is fine.  Nothing she produced was privileged or otherwise exempt, so all is provided herewith.  Interestingly, Mr. Berlo seemed pleased with the scope of her involvement in this matter…

Worry much guys?
In an email sent just now, 28 August I wrote:  I see somebody is reading. A lot. And that weapons raid is suspect too. You guys working with Boston PD and Fire on that? Those are bad people doing bad things too. You don't want to associate with them. Since nobody wants to talk I'll just stop in with my cameras next time I am out East. I'm sure there's a logical explanation. Ciao. 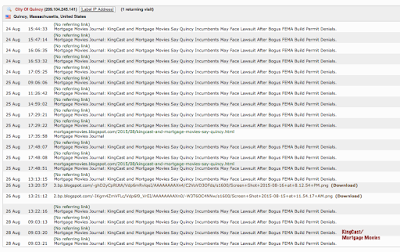 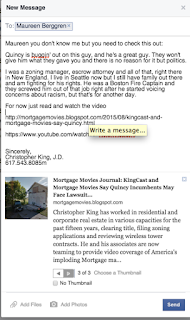 You want some more, how about 16 LCR 305; 2008 Mass. LCR LEXIS 71 (2008) -- Quincy ZBA granted Special Use Permit to a family that appears to be in a similar zone and flood plain (see flood map and zoning map). Attorney Richard "Chip" Nylen spanked the neighbors' collective behinds after the ZBA granted the SUP in favor of Roy and Maureen Berggen.

If Mr. Berlo is given the chance to comply with other VALID requirements he will do so. But you have to give him that chance but you have not.... I've told Maureen Berggen all about this. 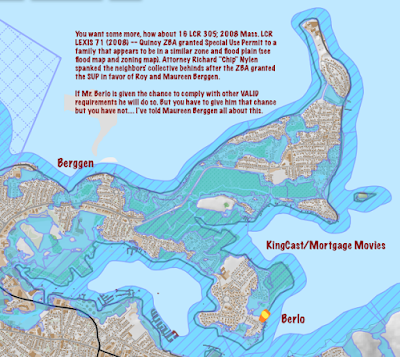 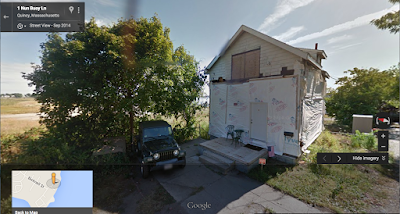 Why can't James Berlo pull a Build Permit?
He owns his property outright so he does not need FEMA/Flood insurance
But Maragaret Laforest told him he does.....
While telling the rest of Quincy something else. 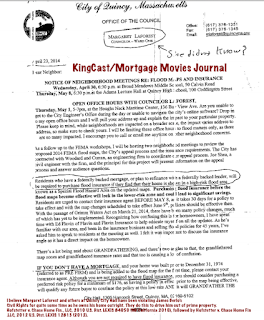 Quincy Mayor Tom Koch is going to hate me just a little bit for stirring up yet more dirt in his town, but I have more than a working knowledge of zoning laws and corruption in Boston, Revere and Quincy MA. I've been a zoning manager who obtained zoning for wireless carriers in several areas of the country including the Greater Boston Area. In zoning we are always aware of SHPO, THPO and NEPA and FEMA issues. I've pulled countless building permits over the years.

Now In Boston I also documented false evidence like this magic bullet that allegedly landed there in the Dan Talbot police shooting and I obtained counsel for Joanna Marinova to obtain a $.6M Jury verdict and $900K settlement against the Boston Herald for Defamation. That all started after she was on my radio show five years ago.

And in Revere I exposed the fact that they put up a new housing complex on contaminated land that was not properly vetted so that the taxpayers never knew about the contamination before it was approved. 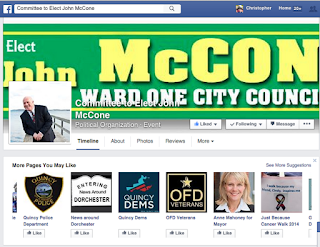 So we now come to Quincy, where I definitely see the potential for a lawsuit with substantial damages being awarded to homeowner James Berlo. I started by reporting on the first Quincy Road rage case that was on my radio show five years ago too, where the general press ignored the fact that there was cocaine in the car with Firefighter Joseph Fasano....which was not charged because it was "recreational cocaine." 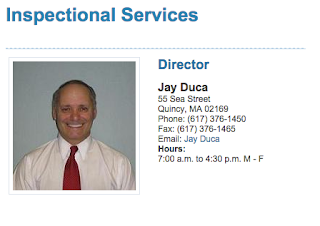 Today in Quincy, Ward one City Councilor Margaret Laforest and her apparently best friend Inspection Services Director Jay Duca both told James Berlo on Quincy letterhead that he needs to obtain flood insurance before he can build on his historic home that he purchased in July 2012. Therefore this remains the critical component that has kept him from obtaining a Build Permit, and he has successfully built out a gutted home located at 2 Monument court in the City of Boston. 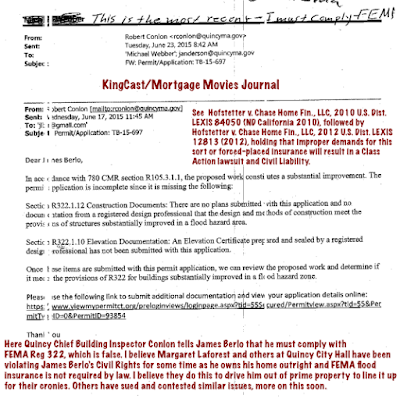 The problem is, her April 2014 letter to the general public (at top) says otherwise. It clearly states that you don't need any such insurance as long as you don't have a mortgage. Well, Mr. Berlo owns his home free and clear so what's the hangup? Here's the relevant case law I pulled from LEXIS and it clearly shows that no insurance is needed in this case. I believe the hangup is that he owns a very unique property that they would love to force him out of so they could help their cronies obtain it.  I have it on information and belief that at least one of his neighbors went through this and successfully sued. 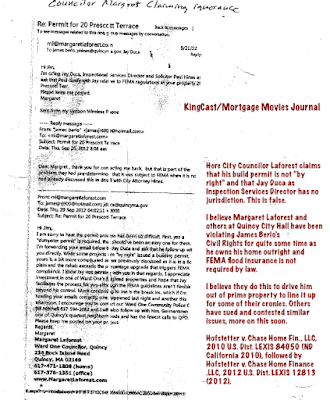 Meanwhile Mr. Berlo continues to get bogus threats on National Grid letter head when National Grid told him they would never issue such a letter. He claims there is no lawful reason for him to move his meter outside and this is just yet another hassle. Who's behind that? Mr. Berldo informs that it was Gary Stone the Supervisor at the Gas Co. that told him “You will be in Violation of the Department of Public Utilities” He telephoned the DPU and they said that’s absolutely not true and they don’t have that kind of Power.

Then again I have heard that Paul E. McCarthy the Town of Canton's only Inspector has been on the City of Quincy Payroll for over a dozen years making $90,000 a year working two hours a week as a City of Quincy Inspector Time will tell on all of this but something also tells me that once this issue hits the public airwaves and Mr. Berlo obtains counsel, this conduct will cease immediately. The only remaining question will be how to quantify his damages for living with 3 years of this abuse.

If any of them have a problem with this or think they want to have a go at me for Defamation just shoot me an email and I'll waive service so we can get right to it. But they won't do that because I'll get discovery on them and that will be even worse than the videos that I'm queuing up.

So that's it for now, but I'll be back. The other question of course, is whether Councilor Laforest will be back in the fall because if she is, I'll be paying her a visit with KingCast Mortgage Movies cameras. And perhaps some of these faces will be greeting Quincy taxpayers instead of the less than ideal personnel to whom we are accustomed.

Posted by Christopher King at 7:11 PM

1. Please provide any and all field notes, emails, ledgers, accounts payable and receivable or any other documents the city has with respect to zoning requests, approvals and denials for the Berggen House relative to the lawsuit seen at 16 LCR 305; 2008 Mass. LCR LEXIS 71 (2008) when the ZBA won on the issue of providing a Special Use Permit.

I watch for developments in the law and I am aware the police have increased powers to hide information as noted in the Patriot Ledger:

But I am not aware of any such provision on the civil side so I expect to see these documents in a timely fashion, particularly since you all have been publicly criticized for unlawful records destruction in recent history, also as noted in the Patriot Ledger:

Which is why I included DPW's Daniel Raymondi in the video in the first place, in case you were wondering.

3. Provide copies of any and all emails relative to the Berlo Property vis a vis my emails that commenced on or about August 23, 2015, with the linked video:

As noted in the thumbnail below, there has been substantial activity at the City on this matter and we all know by and through Boston's beloved Mayor Menino (RIP) that emails are indeed public record. http://www.wbur.org/2009/09/16/menino-emails-2

In case there be any question on that the Pierce, Davis law firm has some answers:

http://www.piercedavis.com/?t=40&an=2573
With this background, one should expect that emails of public officials and employees are considered public records under the Public Records Act. Lest there be any doubt, the Massachusetts Secretary of State’s Public Records Division has issued guidelines expressly stating that “[a]ll email created or received by an employee of a government unit is a public record.” See www.sec.state.ma.us/arc/arcrmu/rmubul/bul199.htm