BTW La Mar Gunn tells me he wasn't even invited to that little Dog'n'Pony show... and he is NAACP Central President as noted in another Delawareonline feature,  "NAACP: War Being Waged on Dover's Black Community."  These people are pure scum.

That story is weak:
http://www.delawareonline.com/story/news/local/2015/08/26/national-naacp-leader-talks-civil-rights-delaware/32440513/

When we spoke an hour ago:

I told her all about how Judge Young made up facts and ignored law to dismiss my First Amendment case; told her how he put me in "interior offices and employee cubicles" when I was nowhere near any such things, and how he ignored all of my professional credentials to instead pejoratively call me (as a black man) a "guerrilla journalist." Yeah, well guerrilla THIS Your Honor:

Yeah well he's a Real-Life Archie Bunker, how about that.  Real Men like Randy Newman, Ned Beatty, or Carroll O'Connor (RIP) see him for what he really is: A hegemonic, bigoted, bought-and sold racist Judge who doesn't know his First Amendment ass from a hole in the ground.

I told her all about how the State stole the Election from LaMar Gunn.

I told her a bit about Dr. Jahi Issa and the lynchings that Attorney Denn ignored and claimed were "suicides."

I told her everything she needs to know she can see in the Rednecks video and the video about Detective Hill calling me while AG Denn stalled in addressing my Civil Rights complaint that they bailed on for all the wrong reasons because Denn is Markell's boot licking water boy as noted in the videos.  Markell is an architect of racism himself, ask Chip Flowers and La Mar Gunn.
http://christopher-king.blogspot.com/2015/08/kingcast-mortgage-movies-and-randy.html
https://www.youtube.com/watch?v=QibeMFiaxgM
https://www.youtube.com/watch?v=i0y_CJtWFoA

And I told her about my background as an NAACP Legal Chair and daily news reporter before law school and several successful First Amendment trials and settlements while I told her that I know full well that her bought-and-sold editors will never allow any coverage of my case or anything real about those lynchings "In Delaware, they Lynch Negroes (Donald Ayotte, Red state).

In the end even if I don't appeal (to face another corrupt Delaware Court before trying to get Cert. at SCOTUS) at least I have inflicted some collateral damage and obtained the 911 call regarding the first degree assault/attempted murder against Henry Fordham and many of us will be forwarding the information to the Republicans.

She said send me some information, well that's bullshit; she's been on this email chain for at least a week now.

Your State is a joke. More accurately a crying shame, and as noted by Randy Newman and me, you are the real "Rednecks" of the so-called progressive North, when every other State allows Free Press Cameras, be it Constitutional, statutory or common law -- even the southern states.
http://christopher-king.blogspot.com/2015/07/kingcast-and-mortgage-movies-observe.html

But Good Ol' Boy Judge Young ignored all of that and just threw my case out and basically said "go to hell nigger, take me up on appeal," just as I told Reporter Masulli. 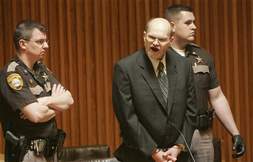 The shame is Delaware's not mine. Below is my Motion to Recuse Judge Robert B. Young for manifest bias in my case but just before that, take a little while to watch the video about Potential Democratic Candidate Joe Biden lying to me about protecting America from multiple felon Greg Floyd. Floyd, seen at left, is basically a caged animal who violated 18 U.S.C. 922(g)(1) repeatedly, and VP Biden walked up to me in Nashua when I brought it up and he put his arm around me and asked "you're a lawyer aren't you," and I said "yessir, and I just want to make sure you guys do the right thing."

Well he did not, and despite numerous letters to the U.S. Attorneys office they never addressed this matter and Floyd of course went on to be convicted for threatening his elderly female neighbor with a gun. In the video below watch the explosive courtroom outburst from this man who enjoyed full protection from Federal prosecution under Joe Biden's watch. Just the facts, folks. I'll make sure the Republicans have all of this. Chalk it up to collateral damage, again. $12,500 or anything close to that could have settled my case..... none of this would have come up. Keep saying that number in your head guys.