I see the trusty officials at the County Courthouse are taking a look. 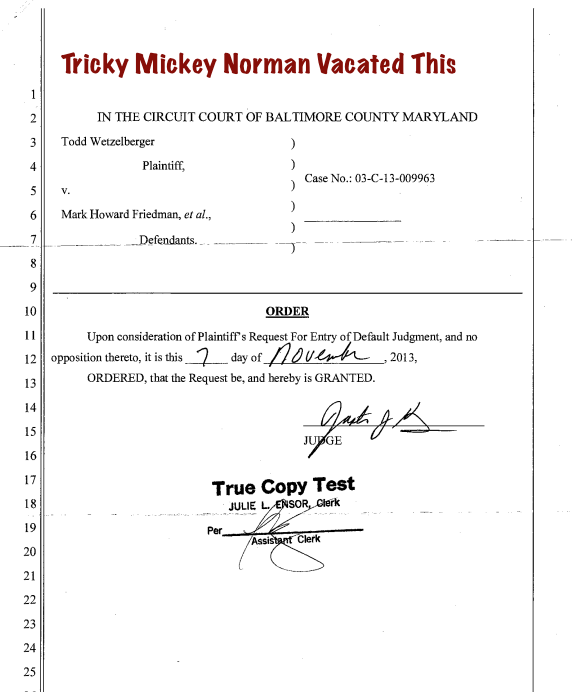 9 Jan 2014 -- Turns out Mickey Norman vacated all of the judgments even though the defendants never even responded, including the disbarred Mark Friedman. He is a dirty judge with petty animosities but this issue is bigger than him, and we're going to show him that.

13 Jan 2014 -- In point of fact he dismissed the ENTIRE CASE without a hearing as mandated by Rule 2-3-11(F). This is a pattern and practice; he did the same thing to Paul Bird I believe his name is. He is a completely rogue judge.

This is so simple: Court files should never be considered lost "in an elevator shaft."

This is so simple: My Notices of Media Coverage should never be considered "lost," resulting in Judge Mickey Norman threatening me with criminal contempt should I engage my Canon.


This is so simple: You pay off your note, you get it back. It is specifically written out that way on most "loan" docs, either explicitly or implicitly. But nothing is ever simple anymore in this judicial/political/economic climate, particularly when it comes to Judge Mickey Norman, whom I have profiled in the past. Watch the video, it's not pretty. In the present, he came to, then ducked out of this hot potato case in which the Defendants have largely been defaulted for chronic nonresponse because they knew they have no response. Among the defendants is Mark Howard Friedman, disbarred for fraud. These are the kinds of people that Judges like Mickey Norman and the general legal climate in this Country too often protect. Here's a Judge who has no financial background to speak of, suddenly handling complex mortgage litigation.... what did they teach him that at the State Trooper academy?
Posted by Christopher King at 2:15 AM