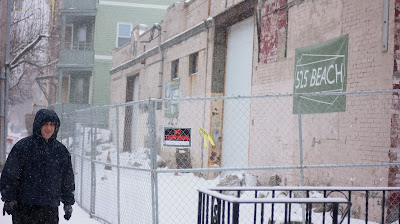 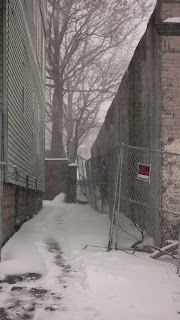 I met up with Revere's Clifford Pisano and ACLU witness Wanda Strange today to discuss his newly re-filed employment lawsuit (more examples of Revere lawsuits and nigger talk here) and his ongoing litigation with "The Developers" (who have changed their name 3 or 4 times) relative to their history of malfeasance and coverup at the 525 Beach Street Development. Recall that the City allowed them to get this entire project through zoning and Site Plan Review without ever notifying the taxpayers. City Councilor Ira Novoselsky (seen below as taken today with video forthcoming) allowed this to happen; he knew about the testing all along so I say he might as well be on the take. I asked him if he was going to smack my camera again as he did in City Hall as seen on videos below, when that slime ball Miles Lang-Kennedy tried to make me turn my camera off when I complained about it to the City Solicitor.....

Among other things they are trying to usurp almost all of the walkway seen above, leaving just over two feet. This would require the Pisano family to convert to natural gas instead of the existing oil service at a cost of $20,000.00. It is my understanding that Mr. Pisano would settle this case for $7,500.00 were it not for the additional expenditure. Otherwise he demands $27,500.00. However, another proposal would leave more area for oil service and for the Pisano family to use the walkway for groceries and other ingress/egress as noted in pictures filed with the Land Court. Here is your back story; today's video coming, stay tuned. 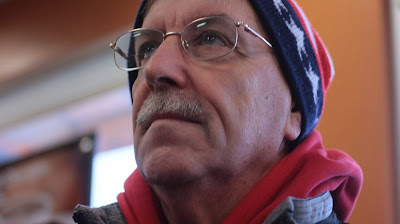 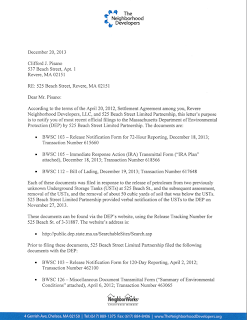 20 Dec. 2013 Update -- These liars send Mr. Pisano a letter about the 72-hour notification regarding "previously unknown" gasoline storage tanks. They were known well before the zoning and Site Plan Review process was completed so these people can go straight to hell, right.

16 Dec. 2013 Update -- New movie up! Also, a status conference hearing was held last week pursuant to a TRO and encroachment land use case. The Court deferred Judgment on any and all of that pending the Developers' Motion to Dismiss, which I don't believe has any merit whatsoever....... The Developer went and got Affidavits from Mr. Pisano's parents stating that they didn't give him permission to launch a Land Court case, but they had already given him permission to make arguments on this issue, and plus his mother is 79 and just had a stroke and his father is 89 years old.

Smells pretty shitty to me..... but the joke is probably on the Developer anyway because Mr. Pisano has an Adverse Possession claim as a tenant who maintained the area in question for the past 40 years, ab initio....  time will tell. There is a hearing on the merits scheduled for January if the case does not settle. The City has moved to dismiss too, even though they clearly climbed into bed with the developers such that the taxpayers never knew about the contamination. More on this soon.


UPDATE: Below the fold review the MGL 21-E 72-hour spill condition email from MassDEP Oil and Hazmat Director Steven S. Ross regarding # NE-13-07964 and database No. RTN 3-31887 that was issued the day after Clifford Pisano ran video and I made the above video. 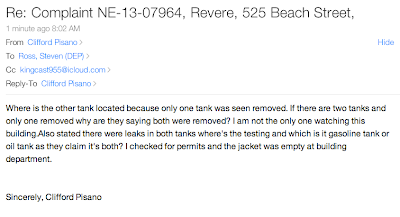 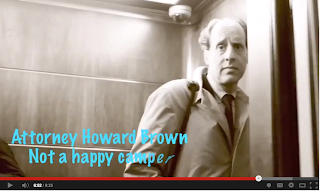 Meanwhile below the fold see the gas tank that nobody wants to talk about at 525 Beach Street. They pulled it out at 7pm last night, under the cover of darkness because they and their "Superlawyer" Howard Brown got the whole project done without ever telling the public that there was any contamination there. He then threatened to have me arrested if I came to his office to interview him. Sounds more like super shitty to me. Douchebag. 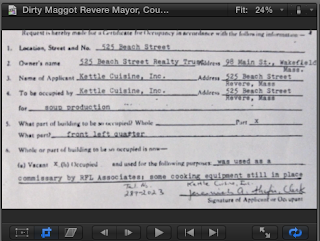 Proof in 2011 that the City of Revere allowed a soup kitchen
to be placed on land it knew to be contaminated.
Mr. Pisano reports that the file is now sanitized.

And the star of the show? Well it's the 2,000 gallon gas tank that Clifford Pisano and I said was still there 18 months ago.... only to have the city Fire Department, City Hall, the Revere Neighborhood Developers, Councilor Ira Novoselsky and Mass DEP cover all of this up while the City and Developers spread lies that it was removed in the 1980's. At left one can readily review the card I pulled from an honest City employee. But Mr. Pisano and his parents have lived right next door for the past 40 years so they knew better, and knew the land was CONTAMINATED even though this development went all the way through zoning and permitting without the taxpayers being informed.

So they go to dig it up at 7:00 p.m. on a Tuesday night 26 Nov. 2013 right before the Holiday, thinking that Mr. Pisano or I won't be around, know I moved 3,200 miles away and hoping they won't get caught. Well guess what? You goddamn scumbags are CAUGHT, even if local media like the Revere Journal and other major press lack the professional integrity to cover this. Video forthcoming and I am going to the Federal EPA on it now. My father retired as a toxicology research chemist (starting with Diamond Shamrock), and he made folks follow the law but when he was coming up he could never dare say what I'm going to say, which is this:

Fuck each and every one of you slapped my camera (City Councilor Ira Novoselsky), called the police on me (Mayor's lacky Miles Lang-Kennedy) or anyone else who let this happen. Yep. All of you cesspool-dwelling political wannabes jeopardizing the quality of life for profit. Remember the soup kitchen that was there? The City took all of this information out of the hard file but it's all going to be in the movie as released at the top of this page.

Note: The Name of the Day is now "The Neighborhood Developers," different name same shit. Some of you may recall that i have a background in property law and zoning, so I rode out to Revere MA not quite 2 years ago to do some research on a low cost apartment building at 525 Beach Street. Abutter Clifford Pisano and I determined that the city knew of contamination by virtue of the gas station card on file I pulled and by virtue of the fact that Councilor Ira Novoselsky was present at relevant developer meetings......
where it was discussed. But the City granted full permitting without anyone ever publicly revealing the actual results of the testing and the city and Mass DEP allowed all of this to happen without any taxpayer knowledge outside of what Mr. Pisano and I have posted.

None of the other media will touch this even though I rolled video of some of them interviewing Mr. Pisano. Well bottom line is the Mr. Pisano has had to file a lawsuit again to halt the proceedings because he believes there is a trespass issue by virtue of 40 years of adverse possession on a walkway and further that OSHA and EPA mandates are not being followed. The Court set a hearing for Dec. 10 2013 but he is going back today Nov. 24 with a sworn affidavit to obtain an immediate TRO. Let's see how the Courts treat this pro se litigant who suffers from brain damage from being beaten and raped as a child. Background here. 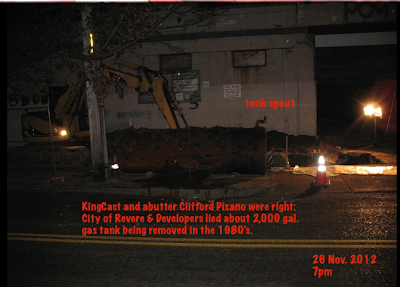 Is this the cats meow or what, hence the 21-e law, gottem  dem sons o bitches


On Wednesday, November 27, 2013 12:11 PM, "Ross, Steven (DEP)" <steven.ross@state.ma.us> wrote:
Clifford,
MassDEP Emergency Response Branch just received a notification from Licensed Site Professional (LSP) Peter Dechaves of McPhail Associates, LLC. of a 72-hour reporting condition resulting from the removal of two (2) underground storage tanks (USTs) yesterday afternoon and last evening from the above referenced location.
Please note that Complaint Number NE-13-07964 (the report I wrote for the information you provided to me this morning when you telephoned in to MassDEP regarding the UST) will now be handled as a formal release of oil to the environment pursuant to M.G.L. c. 21E and The Massachusetts Contingency Plan (310 CMR 40.0000) and logged into our system  under Release Tracking  Number (RTN) 3-31887.
According to LSP Dechaves, each UST had an approximate capacity of 1,100 gallons and each was believed to have contained gasoline.
I have logged LSP Dechaves’ notification into our 21E database under (RTN 3-31887) and have orally approved the following Immediate Response Actions (IRAs) to address the release of petroleum to the environment: (a) the excavation, proper management, transportation and disposal of no greater than two hundred (200) cubic yards of petroleum contaminated soil, (b) dewatering the open excavation via a vac-truck, on an as needed basis, to facilitate soil removal, and (c) site assessment activities designed to evaluate potential Imminent Hazard (IH), Substantial Release Migration (SRM) and Critical Exposure Pathway (CEP) conditions on site, as well as to define the nature and extent of contamination resulting from the release of petroleum to the environment from the UST(s).
LSP Dechaves informed me that the two USTs were located between the sidewalk and the facade of the building.  LSP Dechaves can be reached at 617-349-7343 in the event you have any questions for him regarding the project.
In the event you have any questions for me, please do not hesitate to call me at the telephone number listed below.
Steven
From the Desk of Steven S. Ross
Massachusetts Department of Environmental Protection Bureau of Waste Site Cleanup Oil & Hazardous Materials Emergency Response Branch 205B Lowell Street Wilmington, Massachusetts  01887 (978)694-3371(Office) (978)694-3496 (Fax)
Posted by Christopher King at 12:25 AM