KingCast and Mortgage Movies Celebrate as Goldman Sachs' Fabulous Fab Fabrice Tourre Found Liable for Mortgage Securities Fraud, but what about Sex Trafficking and Everything Else? 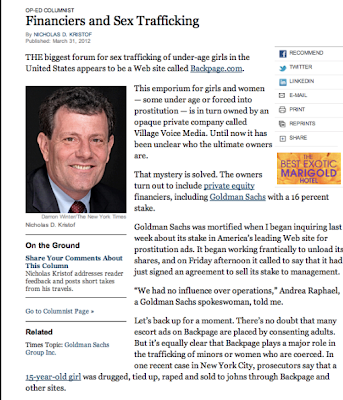 From the L.A. Times. Of course we all know that this is just the tip of the proverbial iceberg. After all, Goldman Sachs even got booed at last years NYC Civil Rights HRC gala. And they didn't give a shit about sex trafficking, and everyone knows that Citibank launders Mexican drug money. They couldn't get away with this stuff without government complicity. And by government complicity I mean people like U.S. Senator Kelly Ayotte: 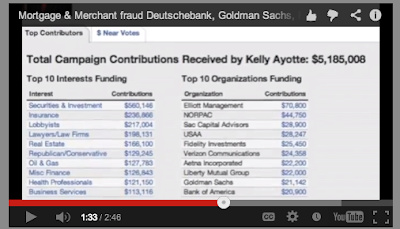 On April 1 2012 I specifically warned reporter Nicholas Kristof to delve into the relationship between Kelly Ayotte, Northern Leasing, Goldman Sachs and several ongoing bundles securities scams, including Vericomm and Northern Leasing and Lease Finance Group after she ignored reports of fraud against small merchants all throughout New Hampshire. This in addition to her bogus mortgage foreclosure fraud task force and such. 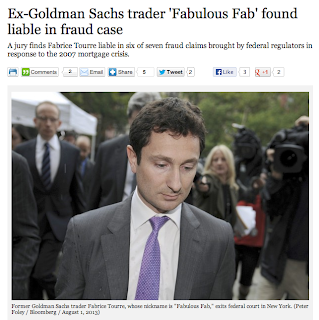 A former Goldman Sachs trader who earned the nickname "Fabulous Fab" was found liable Thursday in a fraud case brought by federal regulators in response to the 2007 mortgage crisis that helped push the country into recession.
A jury reached the verdict at the civil trial in Manhattan federal court of Fabrice Tourre — a French-born Stanford graduate described by Securities and Exchange Commission lawyers as the face of "Wall Street greed." Tourre's attorneys portrayed him as a scapegoat in a downturn caused by larger economic forces.
Tourre, 34, was found liable in six of seven SEC fraud claims. He faces potential fines and a possible ban from the financial industry. The exact punishment will be determined at a future proceeding.
The SEC had accused Tourre of misleading institutional investors about subprime mortgage securities that he knew were doomed to fail, setting the stage for a valued Goldman Sachs hedge fund client, Paulson & Co., to secretly bet against the investment.
The maneuver ended up making $1 billion for the hedge fund and its president, John A. Paulson, and millions of dollars in fees for Goldman. The SEC also sought to show that it helped earn Tourre a bonus that boosted his salary to $1.7 million in 2007.
On the witness stand, SEC lawyers confronted Tourre with a January 2007 email that they said deliberately misled another institutional investor about Paulson's short position in the investment called Abacus 2007-AC1.
Asked repeatedly if the information in the email was "false," Tourre responded, "It was not accurate."
He added: "I wasn't trying to confuse anybody; it just wasn't accurate at the time."
Leaving the courtroom Thursday, SEC lawyer Matthew Martens said, "We're obviously gratified by the jury's verdict and appreciate their hard work."
Tourre left the courthouse without speaking to reporters. His attorney also had no immediate comment.
Posted by Christopher King at 10:11 PM