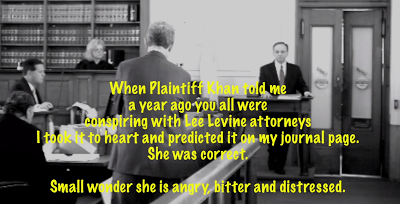 Well folks the Jury declined to find liability after Judge McAvoy allowed in negative commentary from other judges that was in my opinion illegally and unethically-obtained. I have watched the legal system screw this woman over for years and years and years, starting with Judge Dilday who refused to allow evidence that Klein lied about his residency to avoid service, ab initio. She can't get justice while everyone stumbles in their hast to get on their knees before Adam Klein. So nothing new here. Well not everyone gets on their knees. Some folks -- most notably Aimee MacCormac -- successfully sue him for sexual harassment, ahem. Methinks he likes to f__ women over (as well as his business colleagues just ask Boumat, Ltd. vis a vis his felony conviction) and most of the time he gets away with it somehow and comes out like the Teflon Don. My thanks to Janet Aldrich/COMFLM.com for today's video coverage, that I will be hosting soon, as I had another shoot in New Haven. 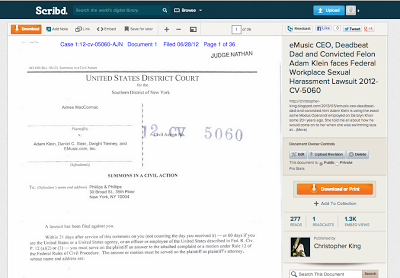 At least Ms. Khan and I --- and others --- can write a book now, given that she did not settle the case, ahem. All in Due Time.

Posted by Christopher King at 2:06 PM