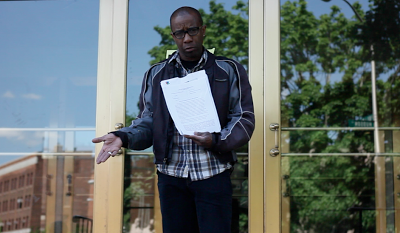 If the U.S. Department of Justice is watching, then why can't my mother and I get any Justice?

This whole case just reeks of injustice. I'll never go violent but I will be the World's biggest pain in the ass until Bremby and the Court do the Right Thing. And it won't be the first time I defeated an entire AG's Office; I did it to my former boss Betty Montgomery and that's a fact:

Even the Ohio Court of Claims had to admit those officers made my client a victim of violent crime.
Best regards,


On top, that's me after hand-delivering my Motion for Rule 60B relief to CT AG George Jepsen. I'm busy this weekend, on vacation and so too is Judge Alvin W. Thompson, who returns on Monday, 20 May 2013 where he will see the indisputable fact that my mother, Betty J. King, is now allowed to proceed as Intervenor in this case because of the valid Connecticut Power of Attorney I filed with the Court yesterday. Video coming Sunday.

I.                  INTERVENTION AND CONNECTICUT GEN STAT §1-42.
It is indisputable that the sole rational for denial of the right to Intervene in the Lower Court was based on the Power of Attorney being from Ohio, and the allegation that a non-licensed attorney may not litigate on behalf of another. The problem with the Court’s analysis was that none of the cases cited dealt with incapacity of the principal. The Court followed Defendants example in citing to Office of Disciplinary Counsel v. Coleman, 88 Ohio St. 3d 155 (200), a case in which a man had hung a shingle in a for-profit venture and was offering legal advice to complete strangers who were of sound mind and body, not incapacitated by Alzheimers.

The board found that respondent, who is not an attorney at law, conducted a business under the name "Trouble R Us Consumer Advocates" in Pomeroy, Ohio. During the course of his business, respondent gave legal advice to a resident of Ohio and prepared and filed complaints on her behalf in an Ohio court.

Naturally the Court found that such activity constituted Unauthorized Practice of Law.[1]
Neither Defendants nor the Court provided any Decisional law from Connecticut.
The Law in Connecticut is quite clear however, and it provides:
Gen. Stat. § 1-42 et. seq.

(1) To assert and prosecute before any court, administrative board, department, commissioner or other tribunal any cause of action, claim, counterclaim, offset or defense, which the principal has, or claims to have, against any individual, partnership, association, corporation, limited liability company, government, or other person or instrumentality, including, but not limited to, power to sue for the recovery of land or of any other thing of value, for the recovery of damages sustained by the principal in any manner, for the elimination or modification of tax liability, for an injunction, for specific performance, or for any other relief;
(2) to bring an action of interpleader or other action to determine adverse claims; to intervene or interplead in any action or proceeding, and to act in any litigation as amicus curiae;

There is nothing equivocal about the Plain Language of the Statute when a valid Connecticut Power of Attorney is involved. The Court did not address this argument on prior occasion because it impliedly determined that Ohio Law still governed this matter. Ms. King filed a Motion for Reconsideration to the contrary, however with her new Power of Attorney firmly set in Connecticut she is authorized to have her son stand in her shoes before the Court.
Note further that in Connecticut Christopher King, Esq. is authorized to stand in place of his mother whether or not he is licensed in Connecticut or anywhere else, pursuant to established Connecticut Law, Clark v. Visiting Nurse Serv., 2001 Conn. Super. LEXIS 434 (2001)(Appendix A).
The Connecticut Short Form Power of Attorney Act, General Statutes § 1-42, et seq., confers upon the attorney in fact authorization to engage in litigation on behalf of a principal in the statutory short form power of attorney. General Statutes § 1-43. This means that HN4

"the principal authorizes the agent: (1) To assert . . . before any court . . . any cause of action, claim, counterclaim, offset or defense, which the principal has, or claims to have, against any individual, partnership, association, corporation, limited liability company, government, or other person or instrumentality, including, but not limited to, power to sue . . . for the recovery of damages sustained by the principal in any manner . . ." General Statutes § 1-51.

The power of attorney presented by Alfred Clark, prepared in conformance with § 1-43, expressly vests him with the authority to assert a cause of action before this court on behalf of Gertrude Clark . . .  [*5]  While Alfred Clark has not established that he was appointed guardian or next friend of Gertrude Clark, he has proffered a copy of the power of attorney executed by Gertrude Clark. Therefore, Alfred Clark has established that he has the authority to bring the present action.
In this action, the plaintiff was designated inaccurately as a guardian and next friend of Gertrude Clark, rather than designated as an attorney-in-fact pursuant to General Statutes § 1-43. The plaintiff in this case is Alfred Clark. Such mis-designation of the plaintiff's capacity is a misnomer which does not prevent the exercise of subject matter jurisdiction and is amendable by the plaintiff.
Therefore, for the foregoing reasons, the defendant's motion to dismiss is denied.[2]

[1] Ohio, in contrast to Connecticut, does not have Plain Statutory language specifically granting a Power of Attorney the right to prosecute actions before the court, including motions to interplead.
[2] The Defendants Motion to Dismiss did not cite to any Connecticut Law. The Court’s Decision did not cite to any Connecticut Law. While persuasive law may be admissible pursuant to Rule 201, it does not carry the same import as the Law of the jurisdiction. That is such an axiomatic Truth that it is basically the first thing taught in legal writing.

Posted by Christopher King at 3:52 AM

Prior to law school I wrote for the Indianapolis Star and edited other smaller newspapers, then I became an assistant attorney general. What I am seeing from AG Jepsen is thoroughly appalling as he and his crew try to defend Commissioner Bremby in this matter; they have issued material lies about the timeliness of our submitted materials and their own emails back to me prove it.

I also copied former Ohio Supreme Court Justice Yvette McGee Brown on this; you will see her with my mother and me in the video. Funny what a small World it is; she is now with Jones Day Reavis & Pogue, and I just sat down with David Reavis at our 30 Year High School reunion out at Hawken. He didn't do the law thing like others in his family but he is watching and when we're not laughing about old times we are crying about legal abuse like this.