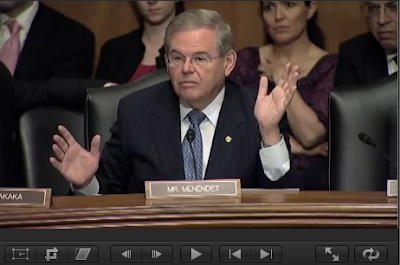 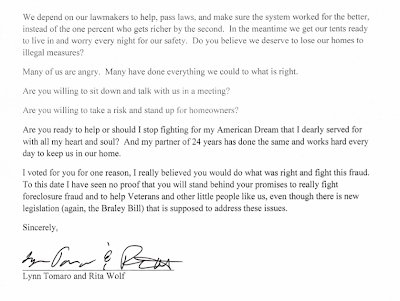 With all the hubub over the Good Dr. Salomon Melgen I figured we could take time to study the Good Senator on other matters.

As noted in the video, Senator Menendez talks a mean talk but he has not proved to many of us that he walks the mean walk. Observe the dichotomy between his get tough stance on the Senate Floor and his benevolent despotism when called to answer to media or homeowners who have been victimized by the very banks and lawyers he portends to go after. And when I say victimized, I mean having Phelan, Hallinan & Schmieg call the police on an innocent homeowner, at which point the Good Senator's junior assistant tell us that the Senator will welcome our report. Read the back story here and here. 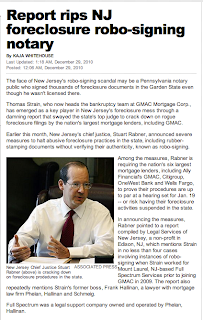 We gave him a report, and his senior aide Betsy Gilligan basically told us to go to hell, despite receiving correspondence from a NJ homeowners' group in our favor. Given what my camera looked like at the end of that hallway we damn well could have been shot, and apparently that would have been preferable to the cops befriending us and making it out alive as the lead officer called Phelan, Hallinan & Schmieg and said "We have two gentlemen out here and we don't know what the fuck is going on because no one is answering the door."
Watch the movie and wait for the links to the new (reiterated) FOIA request and the letter from two U.S. War Veterans who wrote Senator Menendez to no avail. He did, however send them a request for campaign contributions, ahem. 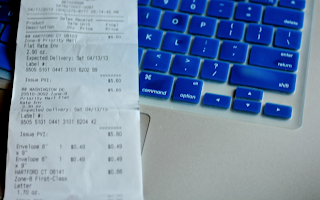 Posted by Christopher King at 9:15 PM

Here's a comment from someone on my Google Circles:

They do not do one damn thing. The Senator here is Mo. Senator Claire McCaskill will tell you , this is not our area , we cant do anything but yest we have a NACA representative that is working with the Politicians,. Senator Claire Mccaskills office does nothing for sure and will tell you as such. Its all polical. Its all a joke and clearly they are all connected and play Theatre when the lights are turned on. What a Joke !﻿