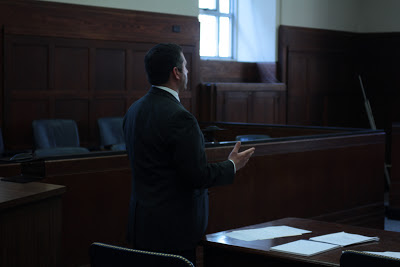 Veni Vidi Oops! He came, he saw, he got slammed. 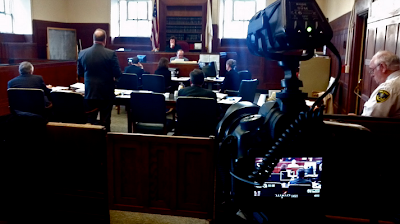 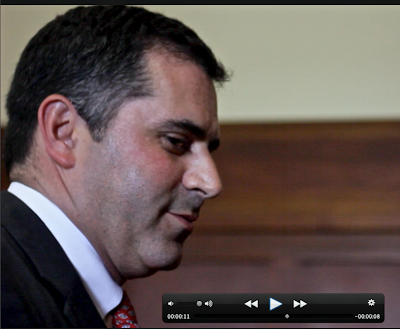 Much more on this later, I need to run home to grab my spare bike key as I misplaced mine in the verbal fracas that ensued before Judge Giles today. Now don't forget, I've already run video before Judge Giles as I reminded her, and you can see her in action in the first video I already made about this case, above.

Note: Seldom does the American or World Public see large multinational corporations in actual courtroom litigation. But with KingCast cameras change all of that.

Pictured:
Andrew Levin is not happy; you can see it in his eyes when he glanced at my camera today as if it were the mechanical embodiment of Medusa. And you better believe he is reading my journal page like a hawk (or more accurately as a hawk, whatever). Scroll down for the journal page lands from his server and note that the first journal post contains corrections to the theories of the case now that I have had a chance to hear courtroom presentations. I wasn't happy about his arguments, which were completely baseless. What a waste of my time and of Judicial resources, for shame, for shame.

Basically the case is bifurcated with breach of contract claim being heard to the Jury and the and the bench to rule on the Rule 93 issues that arose after Mr. McCrea took his computer to Apple Genius Bar and substantial data was lost. Attorney Levin corrected me today on the fact that it is not technically an Apple Care issue. Of course he could have done that with a phone call or email and I would have duly noted same right here. That's how professionals operate. Here's some Back story.

And speaking of back story, it might surprise Attorney Levin to know that I am the man who helped Joanna Marinova obtain counsel in Marinova v. Boston Herald Defamation case, which is again part of the movie on the top of this journal entry and that particular hearing was of course held by Judge Giles. It is a small World indeed. You see, Attorney Levin was trying to convince the Court that bloggers are all opinion and have an agenda, when in point of fact it was the Herald who tried to run their agenda against Ms. Marinova and Darrell Jones and got caught up in a serious case headed for trial in early 2014. I know all about responsible journalism and I practice it, unlike my purported peers at the Herald such as Jessica Van Sack, who also appears briefly in the top video.

****************
Apple Witnesses Scurry
More on this later, but from what I could gather Apple withdrew a witness that they were going to make available for STM's Case-in-Chief. The witness lives beyond this jurisdiction so cannot be subpoenaed. So Apple reneged on bringing him and you can see all of that discussion on video.

But wait, there's more.
The other witness, this one I believe is the eyeball witness who dealt with Mr. McCrea, decided to take a vacation just at time for trial, allegedly because of the shock from the Boston Marathon bombing. Look, as noted in this video and journal entry, I run a bit -- 10K events and shorter (I ran it in 44 minutes which is okay for a 48 year old guy I guess) --- and I was standing right there at the finish line a year ago and would have been right smack there this year as well but for the fact I was hanging out with my Lady 3,200 miles away. So I comprehend shock, but I can smell bullshit 26.2 miles away.

Both of these witnesses took powders only after Mr. McCrea and I brought video to the game. Query, what on Earth are they hiding about? If it's All Good it's All Good, just get up on the stand and say what you have to say, and let the chips fall where they may.

There was little question that more than held my ground in today's skirmish; I basically reiterated everything I provided in my Notice of Media Coverage and reminded Attorney Levin and the Court that I've been involved in media and law as an attorney or journalist for the past 20 years. The Court has plenty to say as well, but unfortunately I didn't get any of that because the issue was contested and not resolved so I couldn't video that, suffice it to say that perhaps the most ridiculous thing I heard from Attorney Levin was: "This is not a case of public interest." Well I'm sorry Counselor but at the end of my courtside update conducted on the stairs, you may notice a well-dressed court official, a young man who runs a certain program that is extremely important and dear to my heart given my legal background, and this man was extremely interested and will be following along.

Be that as it may, Counselor Levin also took issue with my statement that STM's lost files were recovered at considerable cost, even though that statement is absolutely true. The Court held:


"I can't imagine it could not be a case of public interest.... Quite frankly Apple is a huge corporation.... Every time it puts out an application or computer it is written up by every news source and conversely......[when something goes wrong.....]"

"It is impermissible for this Court to determine what is or is not a matter of public interest... and I cannot put a Prior Restraint on his trade, it is unconstitutional.... and reversible."


The second most ridiculous thing Attorney Levin said was,

"This is all a big game to Mr. McCrea," said Levin, as he requested that I not be permitted to share the courtroom video with Mr. McCrea. McCrea was denied the opportunity to video his own trial to this point because he is not registered with the SJC. Attorney Levin argued that the SJC did not intend to allow journalists to capture video that might later become the basis for an independent film."

And not only that, his objection to me making my video available to the media pool is as ill-informed as it is ludicrous. I could have really chopped this guy to shreds today but I was almost congenial, you know like shooting fish in a barrel so to speak. Heck, for that matter I didn't even bother telling him that journos have an ethical duty to make their footage available in the First Place as I did with WBZ as I will show you in a thumbnail as soon as I can locate it. Here it is at the "Neighbors" journal entry. 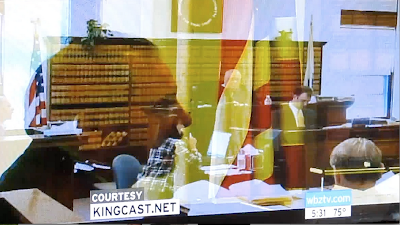 I found it odd that Attorney Levin's conception of First Amendment Law was so thoroughly lacking as to allow him to even posit these arguments, but whatever. Apparently with money and power come certain privileges of largesse for some people I suppose. Read the comment for more on this.

Anyway, hopefully nobody gets shot at trial, except by my little Canons that is.


"That would be like telling Kevin Cullen 'You can't write about Mayor Menino anymore," or Amalia Baredda "You can only show [your work] to certain people."


"Your Honor I'm friends with Amalia Baredda and I'm sure she would agree. Reporter Baredda and I met at the landmark $1.7M Scott Hyman case that I covered, watch her and I engage in a short discussion about restrictive covenants in the movie  -- 3 years later and the case is still stuck on stupid, by the way. Governor Patrick should have taken a ceremonial (and legal) stand on the illegality of such covenants but don't get me started on him after he pretty much ignored the rampant scandal that underlies the Marinova v. Herald case. I'll have some links later for you newbies, and that might include every lawyer in the room today except me.

Interestingly, the Court seemed to place me more as a columnist than a pure journalist, and while I am not necessarily taking issue with that I will politely note that when I am finished covering a story no one can ever say with a straight face that I didn't discuss or demonstrate all chief arguments from all parties. That is because I am a columnist operating as a pure journalist. Meanwhile major press is running an editorial game on you disguised as pure journalism. You know it's true. Sad, but true.

Lastly, don't forget that the original pamphleteers provided the impetus for much of the First Amendment was Speech and Press protections ab initio, and they were opinionated as all hell.  So let's keep it real out here, folks. See you at trial. Attorney Levin can't get enough of me already: New Horizon Communications Group (72.248.205.242) [Label IP Address]    5 returning visits

Posted by Christopher King at 2:51 PM

Obviously I did not receive this email prior to Court or I would have responded. I was out riding motorcycles at the BMW store. That new F800 GT is something else, not really fast but great chassis and suspension and certainly quick enough. I don't know if you ride or not but you have to try this thing it's a real smile machine.

Just my $.02 but feel free to govern yourselves by your own legal, moral and ethical compass.