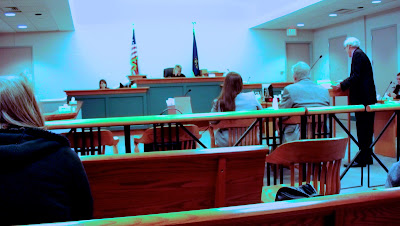 Here are two key recent videos, including one where the Court, by and through Judge Jacklyn Colburn, acknowledges that the State has not provided all of the relevant information as they were, and are, statutorily required to do. As you can see there's a lot of time invested in this. Whatever happens it is going to send a minor shock wave across the State. Here is the conviction and general update journal entry.

Here is what happened this morning, via my KingCast correspondent Monica Flux and video/stills crew, more on that forthcoming. KingCast: I'm still there even when I'm 3,000 miles away!

Sentencing is still pending amidst Motions to Set Aside the Verdict and for New Trial. The courtroom was closed for portions dealing with the Laurie list issue. If the Court sets aside the Verdict then the State will have to face Double Jeopardy arguments if and when they move to try him again. Watch for the Court to work something where the Verdict is set aside and a Plea Deal is reached.

KingCast note: I am aware that the Court has denied my request to unseal the Laurie list portion of the case, but did it in such a way that didn't really address my arguments, surprise, surprise. I'll share a copy of that Order soon.

There were recent communications between Court and Def. Attorney Jeffrey Kaye regarding either sentencing New Trial Motions or Laurie list information.

[Attorney Kaye] stated during the public portion of the hearing:

"This officer has a history of excessive force and lying that is pertinent for the public to know about."

There were three subpoenas issued... the State continues to maintain it was an innocent mistake that information was not provided. The State downplayed the nondisclosures even though they failed to do what the Court explicitly told them to do in the first place, i.e. provide all of the information. Her Honor stated that she has now reviewed the entire file.

"How can they all determine was is relevant to the case?" said Attorney Kaye.

That Judge..... I don't even think she can wrap her brain around it but [Attorney Kay] kept hammering at it....... it's clear she doesn't want this coming out because she is part of the establishment, law enforcement..... as a layperson it seems to me that it's even above the prosecuting attorney's head or that they want to believe it will just go away. She looked so vacant, but maybe they just have good poker faces..... The hearing was continued for a date not certain. Says Flux, "Boy that Judge just did not have time for this... she did not want to hear it.... The prosecuting attorney got frazzled... she was very shaken."

Well they are both going to hear it because I, and perhaps Attorney Kaye will be filing Petitions with the Supreme Court. And in New Hampshire you can file Supreme Court briefs on Constitutional issues at any point in time, so I will get to it soon.

A Dance with the Lawyers
http://www.youtube.com/watch?v=KKxFYW-62rs

But not so fast.

Motion to Unseal
http://www.youtube.com/watch?v=ePFHnkTQIhA
Posted by Christopher King at 5:04 PM