"Once the sale is made, does Triumph care?" -- KingCast says Triumph's 2002 Sprint 955i makes a great paperweight! 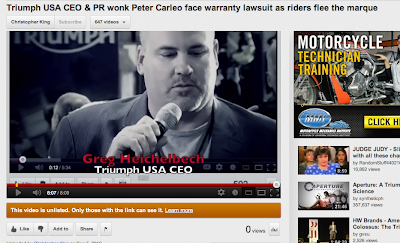 If I have to go the distance I started NHTSA tag -- Reference No. 497626 They recommended if I have to pursue legal action that I file a formal complaint with FTC -- they review management policies 1.877.382.4357 My public servant was Robert #23064 and he was professional nice and courteous -- everything Triumph personnel are not. Won't be the first or last time I had to show a corporate behemoth how to behave. 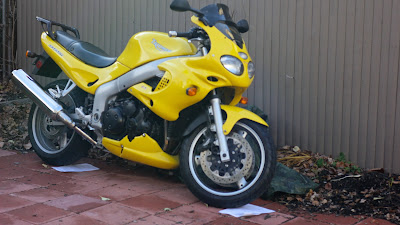 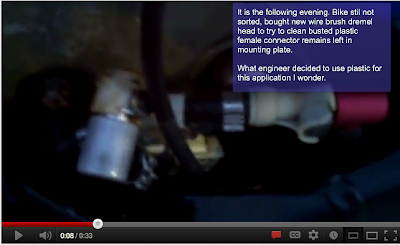 In Movie #2 as Mr. Sprint mentions I discuss the half-assed fuel system recall that I installed only after NHTSA forced Triumph to fix it. Triumph, niggardly as always, only provided the male connectors when the female connector in the tank plate was also made of plastic and fuel-rotted. Had to go buy another one of those as I stuck rags about the tank to curb the leakage. I truly love Triumph motorcycles but the bullshit they can keep, and I will stand up and fight them tooth and nail. As I note in movie #2 Triumph is a premium brand, and every time they half-ass a warranty issue or disregard a warranty issue they are diluting the strength and integrity of the marque. In the long run they will thank me. Also the fuel fittings were replaced after Triumph reported but 18 complaints, I know damn well that they have at least that many shattered crankshafts. NHTSA Recall No. 0v-V-156000 I'll be adding this information to my Complaint and also need to add the 93A Treble Damages Demand Letter prior to suit. 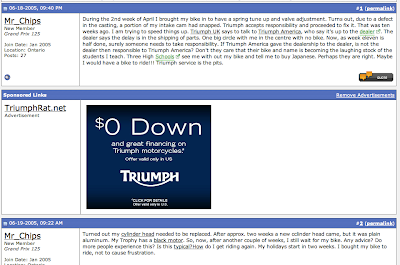 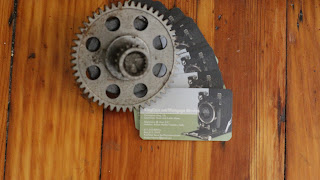 First off, I am not alone as noted in the prior 955i threads but now I see a bloke in Ontario who missed his entire riding season over a camshaft problem, nice. The guy fucking got rid of his bike, yo. Well I ain't getting rid of my bike, I love my bike. I just need to see some corporate responsibility, and if I need to teach it to them the hard way so be it. It seems the only way to get at Triumph is to hail them into court, Jesus effin' Chrizzay. And to think that Triumph might have the nerve to crack on Harley-Davidson for reliability issues LOL. Movie coming momentarily, now back to my case:

The Court has Jurisdiction over Triumph pursuant to the Hague Convention and general principles of fair play:

Kucik v. Yamaha Motor Corp., 72 U.C.C. Rep. Serv. 2d (Callaghan) 637
As already mentioned, neither party has attempted to analyze the issue of personal jurisdiction. However, the facts, meager as they are, appear to support a conclusion that Yamaha Motor Co., Ltd. would be subject to the jurisdiction of this Court.
5 The Hague Convention is a multilateral treaty which was enacted for the purpose of creating a simple and expeditious procedure for service of process on foreign litigants in an effort to encourage judicial assistance and cooperation in international litigation.

Note that Plaintiff Kucik lost because he had no evidence, circumstantial or not, that his motorcycle contained bad exhaust valves that caused his power to dip at he approached a jump at WOT. But see FoMoCo v. Reed:

The Plaintiff offers no evidence that the valves on the Plaintiff's motorcycle contained a defect. Any inference that the trier of fact could draw that the intake valves were defective merely because the Plaintiff lost power while operating the motorcycle at maximum RPMs is pure speculation. The Plaintiff, aware that there is no direct evidence of a defect, relies on Ford Motor Co. v. Reed, 689 N.E.2d 751, 755 (Ind. Ct. App. 1997), to assert that an expert can prove circumstantially that a specific defect caused  [*24] a plaintiff's harm. In Reed, the court allowed a product liability claim to go forward because a fire occurring inside the console of a car was circumstantial evidence that there was a defect.

From Reed:
Unlike the cases Ford cites, the Reeds all but eliminate every possibility but a defect in the console. They only owned the car for a five-month [**12]  period and the testimony revealed that the fire occurred in an area of the car to which they did not have access -- the console. Absent some indication of an extraneous cause, the fact that there was a fire is also circumstantial evidence that there was a defect. This, combined with the fact that Mang indicated that the cause of the fire was an electrical defect within the center console, is enough for the jury to conclude that some defect in the console caused the fire. It is not fatal to the Reeds' claim that the expert could not, with precision, point to which wire had shorted or otherwise generated such heat or to cause the flames and why it had done so. The trial court correctly denied Ford's Motion for Judgment on the Evidence in this respect.

This case is much more analogous to Reed because the shattered engines that keep occurring stand in the same shoes as the console fire. The engine in Plaintiff’s motorcycle has never been apart – Plaintiff stopped short of removing the side cover just in case that fact must be proved. And unlike Reed, Plaintiff King has maintained the evidence in his exclusive possession and control. In fact it is sitting in his driveway at this very moment. Plaintiff told Triumph representative Peter Carleo that we would get some post-it notes to put under the tyres so it could at least serve as a paperweight.

Posted by Christopher King at 11:16 AM