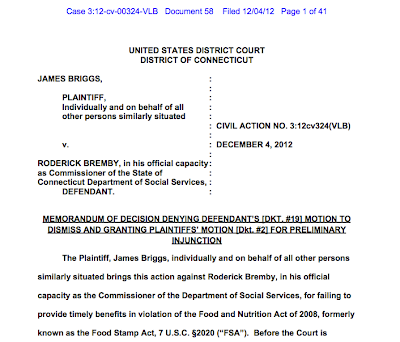 19 Dec. 2012 global email, I have the case and will post it later:
Everything is going to hit the fan now with the companion case of Briggs v. Bremby 12-CV-00324 denying Bremby's Motion to Dismiss in the Food Stamp issue.. Don't say I didn't tell you so. Well you can say anything you want to, I don't care. The Truth is all on my side, and on the side of other innocent victims of the lies and deceit set forth by Commissioner Bremby and his lawyers.

This is a shame because as I told his lawyers before, I was inclined to be sympathetic to him because I feel what happened to him in Kansas was not right, as you can see by my stance with U.S. Senator Kelly Ayotte (read the masthead carefully).http://kellyayottesenate.blogspot.com/

But in this case, involving my mother, he is full of shit and I will not back down from him or anyone else, watching my mother die of Alzheimers while Bremby and his lawyers lie about it churns my stomach all day 24/7.
Sincerely,
Christopher King, J.D.
http://KingCast.net -- Reel News for Real People
http://MortgageMovies.blogspot.com -- Documenting Deceit
617.543.8085/m
866.215.1207/f 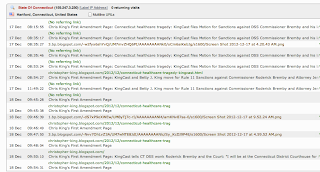 And what are the Defendants and counsel reading today?
The email from me to my sister detailing how everything had been filed with the filing of the Divorce Decree. WTF guys you think I was making that up or what?
In another email she wrote and demanded a full accounting of procedures. She comes from a background implementing Six Sigma back in the Day. We didn't want trouble, we just wanted answers.

But now there is trouble. Lots of trouble. We are not afraid though, because unlike the Defendant, we are not lying. But if Defendant Bremby wants to continue our N___ Moment I'll be more than happy to accommodate him. 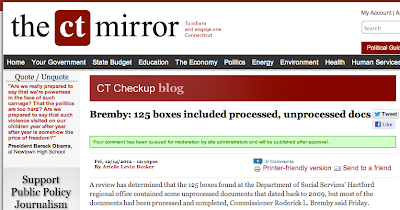 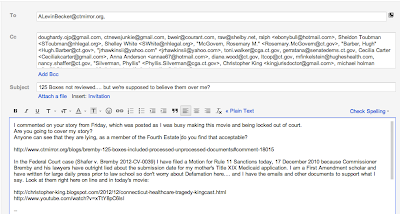 I am waiting for my comment to post in the Connecticut Mirror story about the 125 boxes with processing problems. It's like an iceberg tip, right. I emailed Reporter Arielle Lavin Becker about this. I sincerely hope that the paper does not censor my comments. Censorship is Un-American. Read my comment in the comments section. 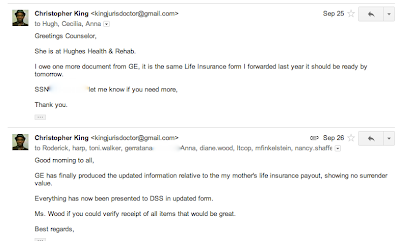 It gets worse: In the Spirit of Due Diligence that Defendant lacks, Intervenor searched her own emails to discover that Attorney Hugh Barber is implicated as well, because she told him back on 26 September 2012 that the materials she was submitting.... had already been submitted.


"I owe one more document from GE. It is the same life insurance form I forwarded last year it should be ready by tomorrow. SSN.... let me know if you need more."

Ms. King hereby supplements the record. The exchanges with Attorney Barber were polite and cordial. Intervenor's position will be vindicated.

I don't know what you're doing reading my journal page
All the answers are right there on your own server.
I am so sick and tired of your bullshit I could puke. 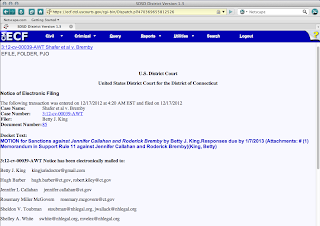 Enough is enough. The emails leading up to 15 December, 2011 and the lack of response from Diane Wood asking for supplemental information over the next seven (7) months prove that our Title XIX Medicaid application was timely.  Instead of accepting responsibility for the dereliction of duty, Connecticut DSS wonk Roderick Bremby gets government knave Sylvania Flattery to say that the file wasn't complete until September, 2012 when in fact that was the month in which I reissued information that had been sent already. Don't they know I can subpoena my bank and they will acknowledge issuing the bank statements, for example, back in fall 2011. It's ridiculous.

My 75 year-old aunt should not have been driving my mother around
but this often happens when benefits are not approved.
But Commissioner Bremby and Jennifer Callahan don't care.

So in the movie the Court security guy tells me that they have been "forewarned" about my presence because  I have "made a name for myself." The connotation -- if not denotation -- is less than flattering. But exactly why have I "made a name for myself?"  In other words nothing I have done is of any moment right here. Why hasn't Attorney Callahan "Made a name for herself" by being such a liar? And why was I kept out of a Settlement conference on 14 December 2011 under threat of arrest.... and they even moved the settlement conference. Now I'll say it one more time, that $@#&!! application was 100% COMPLETE on 15 December, 2011 as the emails between Diane Wood, my sister and I clearly indicate as shown below, above the Motion for Sanctions that was ripe for filing today, after the 21-day safe harbor period. This is why Diane Wood did not issue any Affidavit, and this is why you will never see any emails from her telling us the file was not complete after 15 December, 2011 even as we repeatedly write her and ask what the delay is.

I am going to visit this matter on the Connecticut Bar Association, which will probably pass the buck and say "Oh, it's pending litigation, we can't address that." Oh yah well I'll just take it to the streets then dammit. Watch for a dedicated web page for Roderick Bremby and Attorney Jennifer Callahan where others can write in with their horror stories. Meanwhile I shall wait for the Court to rule on the Motion to Intervene, the Motion to Strike the Affidavit (view those here, a couple thousand folks already have) and this Motion for Sanctions. If you have any questions just go straight to Fed R. Evid 602. 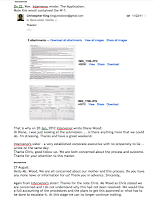 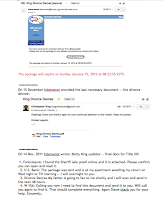 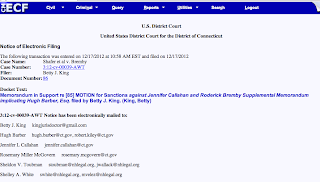 Betty J King Rule 11
Posted by Christopher King at 2:53 AM

Please be advised that the beatings will continue until the morale improves. I have absolutely no respect for you whatsoever; I showed you and your client the email chain and yet you stick to your guns in trying to squirm out of trouble. When your children grow up I can't wait for you to look them in the eye and tell them how proud you are of your career and how you told lies and beat up on a 74 year-old grandmother with Alzheimers. The attached thumbnail says it all.

Your conduct is loathsome.

I commented on your story from Friday, which was posted as I was busy making this movie and being locked out of court.
Are you going to cover my story?
Anyone can see that they are lying, as a member of the Fourth Estate do you find that acceptable?

In the Federal Court case (Shafer v. Bremby 2012-CV-0039) I have filed a Motion for Rule 11 Sanctions today, 17 December 2010 because Commissioner Bremby and his lawyers have outright lied about the submission date for my mother's Title XIX Medicaid application. I am a First Amendment scholar and have written for large daily press prior to law school so don't worry about Defamation here.... and I have the emails and other documents to support what I say. Look at them right here on line and in today's movie: