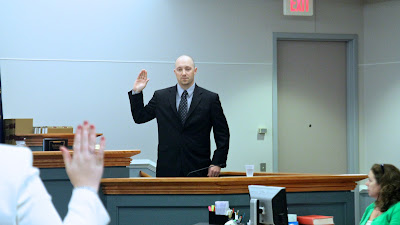 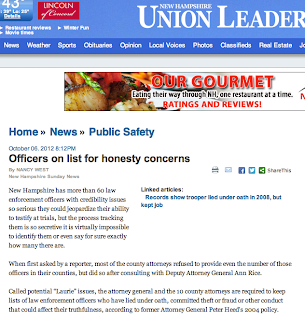 The sentencing hearing is allegedly in February. The Motion for New Trial/Set Aside Verdict is still sitting in chambers with an attendant gag order. When you search Pelham Officer Eugene Stahl on this page you'll see the issue. The Union Leader is well aware of the issue and I may mention it next week when we tape Kevin Avard's show in Nashua: The Laurie List debacle is a matter of public interest, and with 60 cops on that list it is a game of Russian Roulette as to when one of them is going to potentially expose the State to some sort of liability. As I note in the video I am disgusted as a former State Attorney, as a former criminal defense attorney and as a past current and future motorcyclist. Anyway here are the State's closing argument segments that I caught on video, and you can clearly see that there is a heavy reliance on Officer Stahl's testimony and credibility. Too bad in the Saviano case a DUI charge was dismissed because of Stahl's conduct in questioning the suspect at the scene.... a similar issue to what is going on in the Cody Eller case. And from what I understand there is yet another more recent case that landed Officer Stahl on the Laurie List. 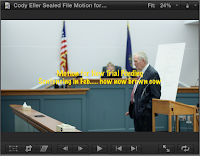 I say from what I understand because Cody Eller's Motion for a New Trial and to Set Aside the Verdict has been sealed and gag orders on the attorneys are in place. I find all of this to be completely unconstitutional and if I find the time and money I will sue over it.

The Union Leader has no excuse. They have the time and they most certainly have the money. So where is the intellectual fortitude and Fourth Estate Integrity? On to the closing argument from Kent E. Smith, who is a heavy in the DA's Office. 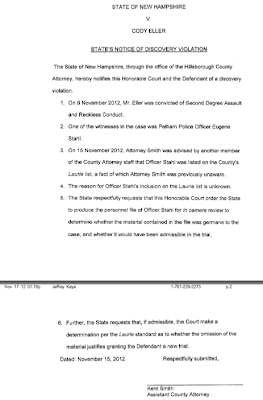 Note: Attorney Kaye informs me regarding the issue of Officer Stahl being on a Laurie list (read here) that the Court sealed his Motion and will conduct an in camera review of the officer's personnel file to determine if the exculpatory evidence rises to the level where a New Trial or Set Aside of the Verdict is warranted. As a lawyer I hated in camera reviews because you can't be there to review the material with the Court. And as noted in other journal entries you simply cannot trust New Hampshire law enforcement, starting with Kelly Ayotte and now Mike Delaney on down the chain. And further, why seal the motion instead of redacting the names? Isn't it in the public's best interests to know? This is where media with the big guns and big money needs to sue to have this information released.

Rut-ro folks.... Not so fast. As in the Liko Kenney (and read the windshield bullet entry) and Michael Paulhus cases, the State of NH has for lack of a better term... completely fucked up. They destroyed evidence and violated Mr. Paulhus' Civil Rights but AG Kelly Ayotte never punished any of the LE involved. As a former LE Attorney myself I found that ridiculous because it is ridiculous, dammit.

In the present case I noted the rule 98 violation that kept their expert from testifying, now we have a 15 Nov. 2012 filing of Notice of Discovery violation. Officer Eugene Stahl has been dishonest, as noted above by way of information contained in a post hoc Laurie disclosure, 139 NH 325 (1995). So whether or not Stahl was dishonest in this instance I don't know but the Defense was denied the opportunity to cross him on it and it is axiomatic that truthfulness and credibility is always material when a witness is on the stand. For crissakes what if he lied about something even remotely similar to this case, then you could have a very different outcome if the Jury placed a fair amount of reliance on his testimony in reaching its Verdict. If I were in Attorney Kaye's position I would have a New trial motion and Demand for Full Disclosure in the Courthouse on Monday at 9:00 a.m. All I could find on Lexis on him however is Saviano v. NH DMV, 151 NH 315 (2004) see the comments. From the NH Bar Journal "Judicial Journey of David A. Brock," winter, 2007:


For many years courts have been plagued by questions concerning the use of exculpatory evidence in the trial of criminal cases. The prosecution’s duty when it is in the possession of such evidence and the materiality of the evidence provided the subject matter for State v. Laurie, 139 N.H. 325 (1995). In crafting the majority opinion for the court, Chief Justice Brock concluded that if a defendant could show that the government “knowingly withheld” exculpatory evidence, then the state would bear the burden of proving beyond a reasonable doubt that the disclosure of the evidence would not affect the verdict. Laurie, 139 N.H. at 330.

This my friends is the legacy of New Hampshire law enforcement that is fundamentally flawed from the top down and it all ties in with why former NH AG Kelly Ayotte hates me so much that she and Nashua PD banned me from her publicly-advertised campaign events. You simply do not get this type of detail and analysis in the mainstream press so people like Ayotte and her buddies John McCain and Joe Arpaio try to shut me down. We are in the Federal Court of Appeals over that after the lower court whitewashed the facts, here's my brief. The AG's office spends too much time going after innocent people like Cody Eller's other defense lawyer Ross McLeod and me (I crushed her when I was NAACP Legal Chair in NH, in part using Laurie Discovery) while ignoring the real criminals like Franconia's Bruce McKay, sad to say.


It is going to be a while before this video is ready because I'm not at home with FiOS. Check back around 9p. Next week for the Day Three video. I'm busy and I'm tired. 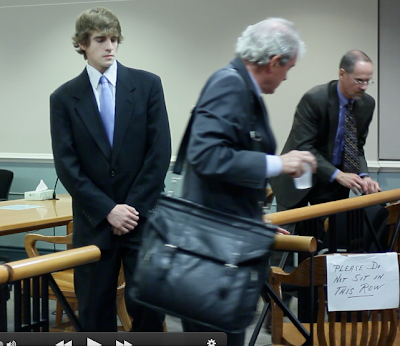 Video by evening. Cody Eller was found guilty of Second Degree Assault and Reckless Conduct today by a Hillsborough South Jury. His license has been revoked and a pre-sentencing investigation and report will issue some time before spring. I take no great joy in any of this for the reasons stated in today's wrap-up video. Video from Day Three (yesterday) is still forthcoming, including closing arguments and rebuttal witnesses. 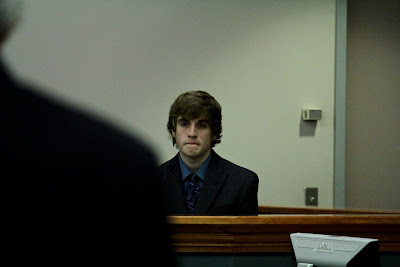 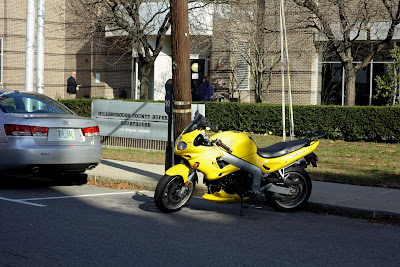 Providence, RI 6:06 a.m. Three scrambled eggs, leftover shrimp moo shu and pamplemousse. Out of yerba mate, ouch. Here is a ton of back story from the trial days 1 and 3.


My gut feeling is that Cody Eller will walk or be convicted of reckless conduct, in part because the State's investigation was not as thorough as it should have been. Also recall the Rule 98 issue where the State's expert witness production was overruled (Motion in Limine granted) because the State did not produce the information on time.

My fundamental problem with the Defense case is twofold:

One, that we are to believe that an experienced rider on a road he knows like the back of his hand somehow failed to negotiate a simple pass and had to duck back into Cody Eller's lane so hard that he crushed his own leg, and

Two, the Officer who stated that Cody Eller told him "I was not going to let him pass," in conjunction with witness Chiasson's observation that the Eller car sped up as William Hawksley started to pass as the passing lane expired going up the hill.

My problem with issue number one is that no one mentioned the phantom SUV being on the road until Cody Eller met with his accident reconstructionist. Therefore if there was no SUV (and even if there was -- unless it was 3-400 feet before them) William Hawksley could easily complete a pass against any car at any point of that road given the performance envelope of a Kawasaki ZX-14.  Now that having been said, a Jury verdict of acquittal doesn't mean that the Jury buys argument number one, but it would mean that the State failed to meet its burden to DISPROVE that theory by a Reasonable Doubt Standard. All clear?
Posted by Christopher King at 8:13 AM

I like the coverage, but I believe Officer Stahl is from Pelham PD.

Yep. My bad. I have put an annotation in the movie, thank you.

All I could find in Lexis on him is Saviano v. Dir., N.H. DMV, 151 N.H. 315 (2004) where there was a question as to how he advised a DUI suspect about his breath test but it was not a material issue.... if that is the basis for the Laurie list then there's not a whole lot there IMO"

"....The plaintiff then took and failed three field sobriety tests. Officer Stahl then asked the plaintiff to take a preliminary breath test (PBT), advising him that "[it] was not his breath test, [and that] it was unofficial." He informed him that it was just to prove or disprove [***5] what he had already witnessed while conducting the field sobriety tests. The plaintiff agreed to take the test. The PBT revealed a Blood Alcohol Content of 0.141, confirming Officer Stahl's suspicion that the plaintiff was driving while under the influence of alcohol. See RSA 265:82 (Supp. 2003)."

"The plaintiff also argues that admitting the result of the PBT at the ALS hearing violated his due process rights. He asserts that the officer's advice regarding the PBT "would have led a reasonable person to believe that the result of the PBT would not be used against him," and that his advice was "lacking in fundamental fairness and offensive to the universal sense of fair play."

"In this case, it was not fundamentally unfair to admit the PBT result at the ALS hearing because before administering the PBT, Officer Stahl had informed the plaintiff that it would be used to "prove or [**1283] disprove what [Officer Stahl] had already seen [while] conducting the field sobriety tests." Indeed, the hearings officer concluded that the State was "not offering it as . . . proof of the ultimate fact, but . . . just . . . [to] bolster[] . . . the officer's observations." Although certain parts of Officer Stahl's comments to the plaintiff downplayed the significance of the PBT, a fair reading of his statement indicates that the plaintiff was warned of the one purpose for which the PBT would be used. Accordingly, and contrary [***12] to the plaintiff's assertion, a reasonable person would not have concluded that the result of the PBT would not be used against him for that limited purpose."

6:29 -- I am just going by what the allegations were by Mr. Saviano as noted in the record. What was the ultimate disposition on the DUI/DWI?

According to the supreme court finding the conviction in the Saviano case was upheld and it set case law allowing officers in NH to use modified ALS forms when they arrest someone initially on a charge other than DWI.

I saw no record of the DWI conviction, just the ALS. Can you point me to that?