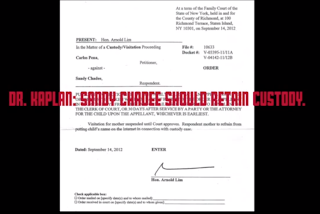 Back story.
Posted by Christopher King at 6:33 PM

Ms. Chadee conveniently forgets the years that she was abusive to the father. Also the years that she lied about her income to the courts so that the father had to pay more child support to support Ms. Chadee's lifestyle and not the child. She also conveniently doesn't mention that she purposely made herself sick during pregnancy and immediately after the child was born was so mentally unstable that the father had custody of the child. She also does not mention that she was sleeping with a detective from the 120th precinct in Staten Island that was repeatedly harassing the father while she was sleeping with him. Mr. King, how many times has Ms. Chadee slept with you for your involvement in her case.

I know Mr. Pena personally and I know nothing that she alleges has a grain of truth to it. You should really get to know the other side of this child custody story and not let Ms. Chadee bias you against Mr. Pena without getting to know what kind of a person he is. Have you ever read the court transcripts of the audio tapes Mr. Pena admitted to courts in 2008 and 2009 of conversations with Ms. Chadee during pick up and drop off, which had to be held at a police precinct to keep Mr. Pena from being falsely accused of violating the order or protection.

There is no way there would ever be incest in the home of Mr. Pena, so the story fabricated by Ms. Chadee is a complete lie. Ms. Chadee was never truthful about anything when it came to this custody battle, so I don’t know why she would start telling the truth now. How do you think she even got pregnant from Mr. Pena without lying and telling him she was not able to have children. There is a reason why she has no other children, no man she was ever herself with would ever give her a child. I hope you eventually see through her lies and past the good sex that you must be getting from her because she will screw you over too as she has every person in her life. Do you think there is a reason Ms. Chadee’s family does not speak to her or are ever involved when it comes to the child??

I know that those allegations about Ms. Chadee sleeping with a Detective didn't seem to pan out because the guy was disciplined for not following up on her complaints, so if they were having sex that doesn't compute.

I also know that she most definitely did not harass Mr. Pena as alleged in this pending action because I was there, so he is a liar.

And if he is going to lie about that what won't he lie about?

Ms. Chadee and me having sex, nope. We are both in relationships with other people, and we have never been intimate. But gauging as to how Mr. Pena always needs his mother around I wouldn't bet against what the child allegedly reported to Ms. Chadee.

Watch out for a Civil action coming from me as well regarding that bogus allegation that I harassed Mr. Pena along with Ms. Chadee.

Oh Mr. King, if only my world were shades of grey like yours. No mention to you defending her lying about the income she was making while she was telling the court she wasn't working at all.

The abuse of Mr. Pena was not recent. It was in 2006 shortly after the child was born.

I bet you have never had your mother around to help you. What a sad man to think that just because a son and mother are close that there must be incest between them.

On the detective, he was disciplined for an inappropriate actions when Ms. Chadee was not happy that the detective was not able to get Mr. Pena arrested. She used him and then screwed him just like she does everyone else in her life.

Also no defending her with her family situation and why they are not around for support. I hope you see the light and get away from this woman before she does the same to you.

You really should have Ms. Chadee share the court transcripts with you, so you can really hear about how she acts in court. That might open your eyes, hopefully.

Your son is a liar who falsely claimed Ms. Chadee and I harassed him.

I have read the court transcripts, no rabbits bounding out of magic hats there for your viewpoint.

As to my mother, I already told you to leave her out of it in the video you no doubt watched, but since you didn't I will tell you right now that I am litigating on her behalf in CT as her Power of Attorney. We were and are quite close, she was my law school buddy who encouraged me to blog and tweet before I even thought it was a Good Idea, so piss off.

You come off as being uber defensive, BTW.

Full docket text for document 52: NOTICE: The Clerk shall file Miscellaneous Notice by Christopher King that he has power of attorney to act on behalf of Betty J. King provided that the actual power of attorney shall be filed under seal as an attachment to this notice. Thereafter, the Clerk shall docket the Motion of Betty J. King to File as Intervenor or as Amicus Curiae as a Motion to Intervene. Signed by Judge Alvin W. Thompson on 11/2/2012. (Sykes, J.)

And speaking of litigation, your son is about to enjoy the pleasure and privilege of litigation with me because of his lies.

Such a small world to think that the Mr. Pena's mother would be the only one that would come to his defense. I really feel bad for you Mr. King. For complete clarification, this is not Ms. Pena.

I don't care who you are. You can choose to remain anonymous and it still won't change the fact that Mr. Pena is a documented liar; Ms. Chadee did not harass him nor did I and if we had the police who were present right then and there would have stepped in.

Of course the court personnel correctly found that I was not harassing anyone at Staten Island in case you missed that.

Speaking of missing things, remember how Mr. Pena missed a few child support payments and had to be ORDERED to pay?

I really feel bad for you Chris that you are sticking by Ms. Chadee and the only argument you can come up with is that he was ordered to pay child support. Very sad argument! That is nothing compared to the pain and suffering that Ms. Chadee has caused the child! Yes, not paying is not the best thing for him to have done, but he knew that Ms. Chadee was lying about her income and he was not about to support her lifestyle as he know the child was not benefitting from the child support! This is my last comment, good luck with your "case" against Mr. Pena. Anyone watching the video would call your behavior harassment! And quite a few people I have shown the video that know nothing of the situation completely agree.

Again, I urge you to get away from Ms. Chadee before she does something to hurt you professionally or personally. Just remember, I warned you.

Carlos you don't warn me anything. You have historically had money problems and you attempted to fabricate a case against Ms. Chadee and me that will go nowhere.

I report on real cases that have substance.

And that's all I have to say to you.

Again, wrong on this being Mr. Pena. This is someone that knows of the situation intimiately, but is not part of the family. So sad that you cannot see past the nose on your face to believe everything Ms. Chadee says and that no one would support Mr. Pena in this very unfortunate situation. Does Ms. Chadee realize what she is doing to the child by continuing this campaign? If she does, she doesn't care and that is the worst a parent could ever do to their child. I hope she enjoys life without him, because her continual bad behavior will only lead to her continual absence.

It doesn't matter who you are, actually.

What matters is that Carlos Pena was ORDERED to pay child support and that he lied about Ms. Chadee or me "harassing" him, etc. etc.

It is truly a shame that you cannot see past the nose on YOUR face.

If the allegations of a sexual relationship between you and Ms. Chadee are baseless, why do you get so up in arms about defending yourself in that regard? From personal experience, sex is the only way Ms. Chadee can get anything she wants. I hope the sex is good enough for you that you are willing to assist her in a campaign that is damaging to everyone in her life, but mostly the child!

Nah, I'm not up in arms over anything, but you are.

I am merely calling attention to your baseless allegations, including some alleged harassment at the 72nd precinct which I know for fact to be a lie.

That's all, have a nice day.

Oh, and one other thing, why is Carlos Pena always crying poor pockets? That's no way to be a responsible daddy is it?

3 comments:
Anonymous said...
While I agree that Rita is biased in cases, and I know this from dealings with her. Once the court has made a decision she will stack the deck to back the judge in every way. I would warn that these blogs will only hurt Ms. Chadee. She should file a petition to move the case from her.
10:04 AM

Anonymous said...
While I will agree fully that Rita is biased and does not serve the best interest of children , she tends to solidify the judges opinion. this was not the intent when the court system made the requirment for such a guardian. I have seen this bias first hand, and it is horrible. Also consider that the questions and answers given in the meetings between a law Guardian and a child can be coached and worded in ways to show bias. However Ms. Chadee in antagonizing the court will not get her voice heard. She should petition for the case to be moved to another judge and law guardian. The system fails many children every day. And I have seen judges and Rita go against child services and the Jewish Board, just to name a few, just to keep alignment with thier decisions. It is sad that there is no other checks and balances in place.
10:38 AM


Christopher King said...
Hey can we talk off line and off the record?

Ms. Chadee had tried some of those other means... as a former practicing attorney I am just sickened by so much of the court system.... and often to get any sort of help you do have to keep quiet about it.... which of course is antithetical to the supposed ideals of this fine country, of course.