I have worked in politics on various grassroots levels for years, including the presidential campaigns of Jesse Jackson and Dick Gephardt. President Obama didn't want me because by then folks figured out that I am a loose canon in the sense that I don't pick sides between Dems and Republicans, basically past the State level I have a fundamental mistrust of most of them in the first place, right. Same reason Daily Kos and Firedoglake booted me from their happy little fora.

So anyway I telephoned both New Hampshire D-7 Senate Candidates on Tuesday of this week, seeking responses to a fairly standard battery of questions. My curiosity was piqued when the Democratic candidate failed to respond by today, Friday. Said curiosity was further enhanced with the public allegations of Nannygate issues that I read this morning on Granite Grok. Read the journal entry and watch the short video.... and as promised, as soon as I receive a response from Candidate Hosmer I will post it in its entirety, the same exact way I posted it for Candidate Youssef.

Now then back to DK, some of the biggest asshats I have ever seen in one chat board:


The situation is such that I feel safe to say that if the Dailykos had been operating when Galileo was trying to convince everyone the earth was not flat, I've no doubt he would not have been able to keep his comments from being hidden and/or banned (not that I'm Galileo by a longshot, but I stand by the analogy). The way Dailykos is set up is only useful for maintaining a status quo, it does not seem to encourage talk of paradigm changes, whatsoever. Whether this is an errant structural issue or a conscious effort to control and manipulate things by a few is what is most open to conjecture, imho.

LOL, despite the presence of some really nice people, DK and its ilk are all a bunch of Lord of the Flies sort of hangouts. They threw me out for complaining too much about how bad Kelly Ayotte is, now they often write about.... how bad Kelly Ayotte is. I used to care, now I just laugh. Here is a journal entry from six (6) years ago when I cared. 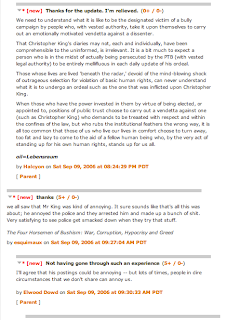 PS: Not to condemn the whole site, this page -- a congratulations from Elwood Dowd on my victories over Kelly Ayotte and fired Jaffrey Police Chief Martin J. Dunn -- is noteworthy because it shows the Good Side of DK:
Posted by Christopher King at 9:50 AM

They don't call it the daily KON for nothing.

"Is there such a thing as a former spy or CIA operative, I wonder."
NO absolutely NO. Remember, follow the money, the mob owns the world. They own it by the financial system. The Fed has a black budget that finances the CIA. Spy's, being part of the mob, can only get out by one method. Death.
Remember also that in the Art of War that actual ops are hidden by many false ops to keep the enemy off balance. History is replete with examples. Benjamin Franklin's secretary in Europe, while he was an Ambassador to France, Mr. Bancroft, was a British Spy. Good Ole Ben must have known but didn't mind because the plans of the US were so underfunded that hardly any serious plans actually happened. Case in point, John Paul Jones was planning with Franklin to launch an Attack upon English soil with the French support. It never materialized, but then again, nobody expected John Paul Jones successful battle within site of the eastern English coast with the Serapes.
Once a spy, always a spy, until death do you part.