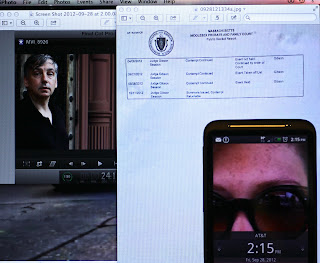 Judge Dorothy Gibson does not particularly care for Rick Peralta, even though he is a fit father exposing likely abuse of his autistic son. She definitely doesn't care for me too much either and I have a court transcript to prove it but I'll save that for another day I deem appropriate. In this particular instance she had ordered Mr. Peralta to pay sanctions to a certain attorney because she didn't care for something he wrote. But Mr. Peralta insists, with documentation, that when he attempted to pay the sanctions the attorney instructed his staff not to accept payment. He presented this information to Her Honor who issued an order of incarceration anyway.

So there was to be a hearing scheduled on the matter today, and for the past week he was telling me he had checked the docket sheet and it was marked "canceled." But to be on the safe side he went in today and lo and behold the docket reflected not only that it was still scheduled, but that it had actually been held.... at 2:40p. The problem is, he read that before the event even happened. Note my picture, above. heck this journal entry will date itself at 11:30 PST..... So now he is sitting in the hallway, waiting patiently.... still trying to figure out this jigsaw puzzle... before it rains, anymore. They need to flush the whole courthouse down the toilet, John Buonomo's theft in office was the tip of the iceberg. Too bad he still collects a pension. Your tax dollars hard at work.
Posted by Christopher King at 11:30 AM

The trial is upon us and discovery has been wholesale obstructed!

dada_too said...
This comment has been removed by the author.
12:08 PM

Judge Gibson has yet to rule on the contempt from last fall... or any of the many pleadings I filed...

Judge Gibson heard the motion to dismiss the case based on jurisdiction, the respondent is 18 years old, lives in another county and there are no plans to return. The movant blustered, and made it clear that he may sleep at her residence 10-15% of the time. Opposing counsel failed to make any real argument or cite case law. Judge Gibson made a determination that contradicted all evidence - DENIED.

Judge Gibson heard motions to compel witnesses, who wholesale defied subpoena and boycotted depositions; including opposing counsel who failed to appear to protect her client’s interests. Judge Gibson stopped the trial to draft and issue her order DENYing motions to compel.

Judge Gibson refused to reconsider the motion to recuse and said I have dealt with that.

Christopher King made a cameo appearance and found security, in hospitable. The mood in the court seemed to change after he appeared.

The movant gave testimony and appeared in significant distress. She blustered a lot, but failed to provide answers to questions. When given a chance to amend or correct or elaborate on her answers, counsel called that badgering. Rebuttal evidence will contradict her testimony…

After the testimony of the movant, judge Gibson reversed her order on discovery, has allowed medical discovery from and scheduled another trial day for May 31.

In an related case, judge Gibson made rulings on a variety of other motions; previously mentioned in this BLOG. In general she denied everything. Yet has not ruled on the underlying complaint, contempt that was proven and even admitted to at hearing.

If I were not a simple pro-se litigant and Judge Gibson were my friend, I would invite her to go for a long walk in the woods, maybe into the mountains, perhaps above the tree line. There, away from all distractions, to meditate on her career. Has she been unbiased, has she remained true to her oath of office, has she been a true public servant, has she succumbed to any corruption? These are the personal questions I would advocate she consider and would gladly sit with her for as long as it takes to find the answers. If she was my friend.

Unfortunately, we have only the legal process, which is sorely maladapted to the tasks at hand. It make enemies of all and a prize of the most precious and delicate resource our society has – our children.

I have observed that the lawyer has admitted that he instructed his staff to refuse to take the sanction money. The court does not find this is relevant...

The court instructed the alleged evidence be submitted to the court. Opposing counsel has objected and moved to strike the evidence from the record...