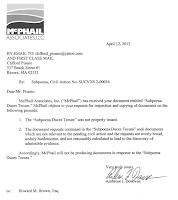 McPhail & Associates is now playing the game. Three blind mice, see how they run? And unless MassDEP or EPA forces their hand with an investigation, they will keep on running because it is fairly clear that the owners and developers at 525 Beach Street violated 21-E by not reporting the contamination to EPA or MassDEP within 120 days when McPhail produced the results. This allowed the project to get through site plan review and zoning and public comment without notation of the actual contamination levels. Mr. Pisano said he plans to file a Motion to Compel and I support that effort, because this is complete bullshit. One day the Answers will come out, or we will start picketing at the EPA. As we saw by this video, some folks at MassDEP are completely adverse to doing their job, with public relations folks refusing to even shake Mr. Pisano's hand. Our tax dollars, hardly working. I look forward to helping Mr. Pisano design the big-assed banners to put on his parent's house right next door soon, let's see zoning fight him on that, par for the course of course. Keep in mind that Mr. Pisano is preparing an affidavit noting all of the work he has seen done on the building and the fact the he believes he saw testing being done back in 2008.....Here is your back story with videos. 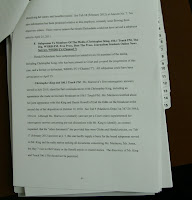 Think I'm not media, fool?
Tell it to the Boston Herald in Joanna Marinova v. Boston Herald et al.
I help police against bad journalism.
Also yesterday a Massachusetts Department of Environmental Protection discouraged Mr. Pisano and Yours Truly as we filed a complaint. It was insane I'll tell you. I knew he was going to act funny when  he saw us and declined to shake our hands. I'll get the Feds in here if I have to.


Scroll to bottom to see that the Commonwealth of Massachusetts loves
KingCast First Amendment Page!
Hot off the presses: More rudeness from Court Clerk Bob, movie up by 8:30p.
You will see the department director was totally chill at first, i.e. "he's just videotaping [Clifford Pisano's] hands...
But then comes Frantic Bob.

Query, why does the government--who has cameras and surveillance on its Citizens 24/7/365 -- hate it so much when we even try to video a guy filing a complaint
or other documents JUST SHOWING HIS HANDS???


As a former government attorney it is revolting to me. 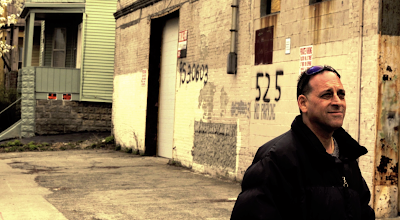 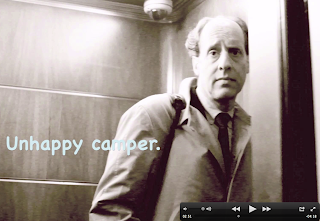 Here is your back story. Two or three weeks ago, Barlett, Hackett & Feinburg Attorney Howard Brown admitted in open Court that his client conducted testing prior to ownership of 525 Beach Street. What he failed to tell the Court is that his client (Revere Neighborhood Developers, hereinafter, "RND") had long since executed a Purchase & Sale Agreement with prior owners. The Agreement was dated 21 April, 2011, a month prior to testing at 525 Beach Street as noted at the RND website, where City Councilor Ira Novoselsky was present at their meeting where the contamination was discussed. As such, RND and the prior owners are Owner-Operators of 525 Beach Street, within the purview of 21-E. It is likely that all of the entities involved then, knew of the presence of carinogen contamination, but they along with Site Plan Review and ZBA kept the specifics hush-hush so as not to impede zoning, thereby sacrificing the integrity of the process against a largely unsuspecting community. This matter should have been divulged to SPR a long time ago pursuant to their regulations, http://library.municode.com/index.aspx?clientId=16060
17.17.060 - Materials for review—As may be required (for multifamily, commercial and industrial projects only).... If applicable, a shadow study and an assessment report pursuant to Chapter 21E of the MGL.


As I duly noted, 2-Methylnaphthalene is no fun, not even in a Froot Loops box. The EPA says 1,2-Dichloroethane is not your friend, either. Trichloroethene (TCE) is the major contaminant at Wells G and H in the tragic Woburn, MA "Civil Action" case.


Therefore they meet the threshold ownership/management interest required by the case of In re Knott, Docket No. 2011-011, PAN-NE-11-3R001 ($10,787.00 fine for failure to report TCE, affirmed). Moreover, the City of Revere had held multiple liens on this property and arguably had a duty to report this matter to the EPA as well because it had actual and constructive knowledge of the issue since the tanks went into the ground back in 1924 and allegedly came out in 1980. A formal complaint will be lodged with Mass DEP on Monday, and here is the pertinent ownership/management history.

*************
But I'm not done yet. In fact I'm just getting started. Mr. Pisano contacted me yesterday as he was reading through his paperwork filed by RND. "Hey King this guy is bringing up other cases that don't have anything to do with this what's up?" So I took a look, and Attorney Brown has made reference to the employment case that Mr. Pisano plans to refile against Tom Ambrosino and Captain Murphy and others because they fired him using an unsworn police complaint while the Union took a powder and failed to represent him even though he was clearly involved in concerted activity in organizing the union for crosswalk safety personnel. Not only did Attorney Brown make reference to it, he put a negative implication to it. Says Mr. Pisano "Where is that post where you pulled up all of those Lexis cases where Revere was always in Court?" So I sent him the list, including the one where Defendant Murphy, now Boxford Police Chief, ignored the Vieux attorney after he asked about the "black nigger" epithet that Revere's finest hurled at his client prior to paying him out, looks like the pot calling the kettle black, right.


Dear Attorney Brown, I know you are not a happy camper that I am exposing your client's rotten eggs at the Easter/Passover Seder Holiday. But that does not give you license to try to pick on Clifford Pisano for fighting the corruption that has run rampant at Revere City Hall for decades. I suggest you wash down those unsavory eggs with a shot of bourbon laced with TCE, I heard it's good for you.
Commonwealth Of Massachusetts (170.63.96.108)

Posted by Christopher King at 8:07 AM

It is Easter Sunday. So today I talked to my father -- you know him as the toxicology residue chemist from certain of these videos -- and he and I laughed our asses off about this.

Not because the underlying issue is funny at all, because it certainly isn't. Rather, we laughed because of the synchronicity between his career and mine. And like him, I do not suffer fools or bullshit gladly. And I have weapons that he never even dreamed of back in his day.

"Why didn't the developers just tell everyone what the contamination was when they found out, and just go on ahead and clean it up?

"Because it's Revere, Dad. They just don't do shit the right way."

Good informative blog. Thanks for this great information.

Thanks Gary, I am often in the City we should have lunch. I see you are up in Great Neck, the spawning ground of J.P. McEnroe!

PS Wait until you hear the video from the Mass DEP office today the guy was just really shitty with us, didn't even move to shake our hands when he walked in, like he didn't want to know about it.

I told Region 3's Steve Johnson all about it, it was ridiculous.