To:
"Cliff P" <revereman_p@yahoo.com>
Clifford:
I am prepared to discipline you for several incidents during this past year, including the most recent one on April 13, 2010 in which you allegedly tape recorded a union representative without his consent.
The meeting is to provide you an opportunity to discuss your options.
If you do not wish to meet, just let me know.  I will then impose discipline without discussion.
Tom A.


Clifford:
I don’t care about your ongoing case.  You need to meet with me on one of those dates.
Tom A.
From: Cliff P [mailto:revereman_p@yahoo.com]
Sent: Tuesday, June 22, 2010 11:27 AM
To: Thomas Ambrosino
Subject: Re: Meeting 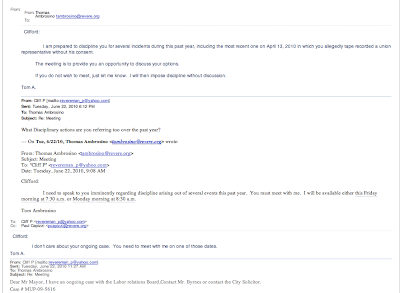 That's former Revere Mayor and Defendant Tom Ambrosino
sticking his foot in his mouth, trying to attack Plaintiff Clifford Pisano
for illegally taping a union meeting while Mr. Pisano had an ongoing case.
Too bad the tape recorder was on the table in plain view, right. 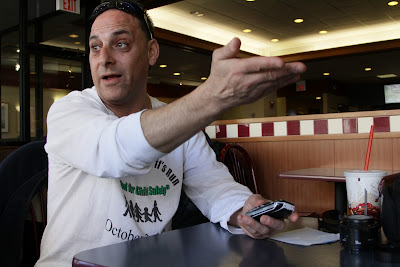 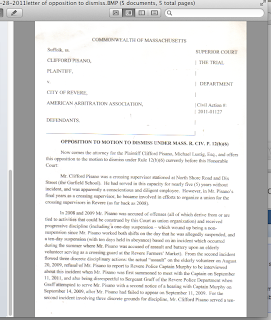 ....and he's bloody pissed off at his lawyer Michael Lustig for not moving his documentation into the record, including the Right-to-Sue letter from the AG, the unsworn complaint against him and bogus letters written from then-Captain Murphy. They are posted below. Says Mr. Pisano: "Mr. King, the guy just stood there and said 'My client is suing the City of Revere' and did nothing else, didn't break down the exhibits or anything. The folks at Board of Grievances told me that could be malpractice." 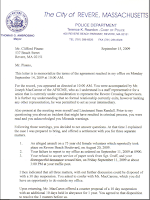 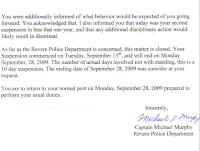 At top is the video from Mr. Pisano's lunchtime interview last week with a certain local newspaper, where Mr. Pisano discussed some of the things you will see in these pleadings, including the fact that an AFSCME Union rep Joe MacCarone (a Londonderry, NH LE) helped "represent" Mr. Pisano even though he allegedly was not eligible for representation. Further, his witness was not permitted to testify about what she observed relative to an unsworn criminal complaint that he had allegedly assaulted an elderly woman on the beach, who was wearing a crossing guard vest. That's a whoops. He also got in trouble for not leaving his post to receive a hearing notice, and he was written up for not attending a hearing on the very next day when he told them that was not enough time to get a lawyer.
As you see by the September, 2009 letters from Defendant Murphy they suspended Mr. Pisano until 28 September, but what Defendant Ambrosino did next was call him into the office and fire him at the end of the school year in front of witnesses, as referenced in the movie, above. Another Nice Touch from the folks who patented the PD trunk taxi for rebellious youth back in The Day. Yah they want to press him he's going to make all of it public, flush out that septic tank that was Revere City Hall and PD. Whatever the case, after Tommy Ambrosino claimed they would fight his unemployment (watch the movie opening) they folded like a paper tiger and did not even contest his unemployment, because they knew they fired him without just cause and did not want to open up a can of worms. Read last week's journal entry and below the fold for more..... 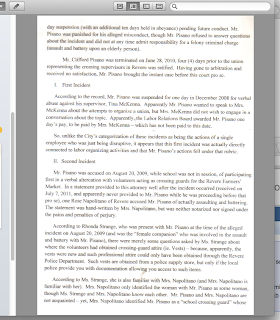 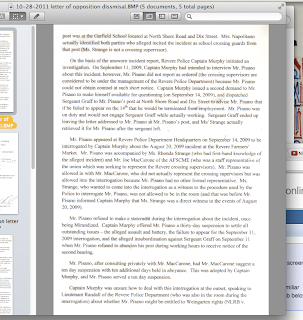 Posted by Christopher King at 8:33 AM

Time to play Survivor,who will win,who will throw who under the bus?