Nashua Police Abuse Survivor Mike Gannon gets his Day in Court.... and it shows that Nashua PD is going to be in sad shape come time for Jury Trial. 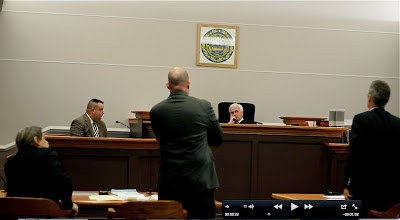 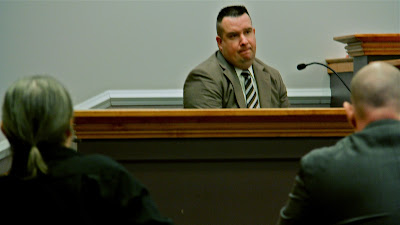 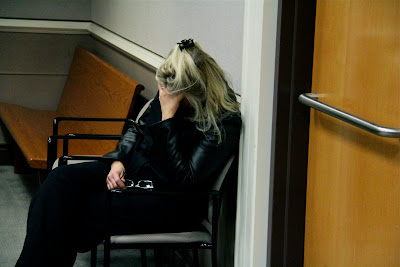 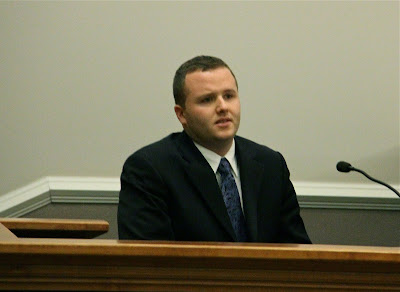 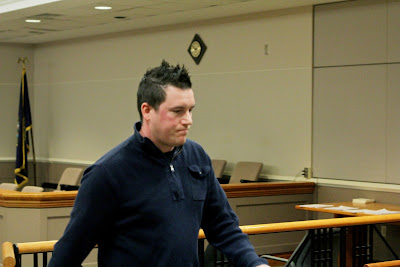 Nashua LE and their witness don't look too happy.
As Rod Stewart said (when he was still cool IMO), "Every Picture Tells a Story, Baby." 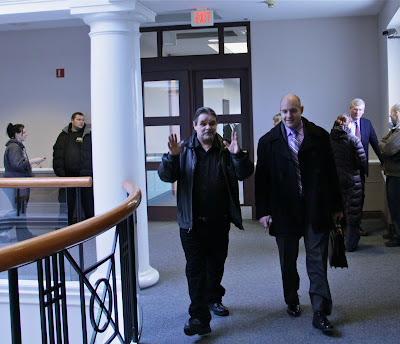 He should mop the floor up with Nashua PD's uniforms the same way that Dave Ridley did; the same way that Simon Glik did to Boston PD. And he will, just as soon as he gets his Appeal to a Jury sometime this summer. Judge Bamberger -- the same Judge who issued a warrant in the bogus 2006 seizure of Mr. Gannon's videotapes of Nashua PD police abuse that I will sue for under RSA 91A -- and who on information and belief also signed the warrant for the ill-fated seizure of Mr. Gannon's Chevy Avalanche -- found him guilty of all three pending charges, resisting, assault, disorderly conduct, blah blah blah. Bamberger Petition 7, Bamberger Petition 6, Bamberger v. 4:20 Celebrants.


Now here's the Fun Part: The bicycle cop (and every other cop) today testified about all kinds of profanities allegedly hurled by Mr. Gannon. Too bad all the witnesses I interviewed claim otherwise. Too bad the bicycle cop's police report failed to mention any such obscenities to boot, I got that on video today. A Jury will laugh its ass off over that.


More Fun to be had: Mr. Gannon and his lawyer Justin Shepherd, pictured, basically got a free Discovery session "We all know what's going to happen today," says The Shep as we walk our way to the Execution Chamber... err.... Courtroom. They didn't call any witnesses and they don't have to, and it wouldn't have made any difference to this Judge I can guarantee you that. The Prosecutor, got all kinds of flustered as I walked back into the courtroom as I managed to catch the tail end of a colloquy that started with X/E of the State's only witness, who is a manager at Peddler's Daughter, a known LE hangout.


"It's not a cop hangout," he shrieks.... "I hang out there." Gannon actually spoke up with something like "exactly." Video and stills coming in Due Course, no real hurry and I am crazy busy the next 7 days with mortgage movies and a criminal hearing, both halfway across the Country but I'll be putting something real short together in the next couple days and something very extensive before month's end.


One more thing: Apparently you cannot tell a cop you are acting in self defense even as you have 5-7 LE in your immediate area or the Court may use that against you. Mr. Gannon was maced twice and struck about the head and thorax by Nashua's finest. The guy was out for a walk with his dog. He's not a drinker and I highly doubt he was a physical assailant in this circumstance, just as he wasn't back in 2006 when they stuck a loaded gun in his face at his own door and he took it from them. For those of you who don't believe Mr. Gannon? Why do you think they won't release them? Why do you think they confiscated them in the first place? I will sue for those videos in Due Course, but I figured I would wait for major media to do it first, right.
Posted by Christopher King at 4:04 AM

Kick their asses Mike, give it to 'em GOOD.

Apparently someone else thinks so too.
From the email tip jar:

He should go after him with NH RSA 643:1 to. If convicted of that can they lose the right to carry guns too?

Cops are out of control . NH has case law now on video recording police
http://nhlegalservices.com/News/NH-Judge-Upholds-Right-to-Record-Police-in-Public.aspx

Mr Gannon should do a citizens arrest right there in court when they get found guilty. What a better way to arrest a corrupt person or organization in front of a judge and a peace officer present to do the arrest lol. check this guy out pulling it in court. the DA pulls his wallet out and keys he knew he was bagged. Must of been stuff in his wallet that he didnt want anyone to see or why would his first reaction be to pull his wallet out.

Check the video out.
http://youtu.be/safvzottzZo

As a former LE Attorney who has defended and sued LE, it just irritates me to no end to see bad cops do bad things and then the system tries to cover it up instead of just saying, "hey, mea culpa, I fucked that one up bad."

I'll bet you that sort of admission would reduce litigation costs markedly because most folks would say "cool, now just fork over $10K for my hassle with the apology" instead of going for high-five figure or six figure settlements.