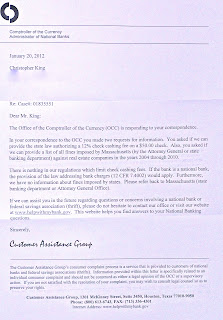 To be hand delivered 26 January 2012.
First up:
Dear Attorneys Coakley and Abdeljaber:

As anticipated in this 25 October 2010 journal entry, the Comptroller of the Currency (who reads my journals as noted in the Bethany Hood/Fein, Such Kahn robosigning journal entry) has no clue regarding what your office did with the fines you have assessed against mortgage companies with whom you settled cases. It only makes sense to me that someone in your office maintains that information. I am entitled to the information by law so please provide it so that the taxpayers are spared the cost of litigation. Thank you. 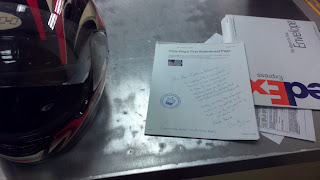 **************
21 Feb 2012 update:
Even though new cases over time will show that the Anderson's case changed the law in Maryland, they were denied any and all benefit of the decision and the Court basically screwed them over, royally by merging the Deutschebank entities and falsely stating that the Andersons acknowledged that one of these entities held the original documents. Read the Motion for Reconsideration as filed, below. Here then, is the cryptic decision and the order of costs to boot: 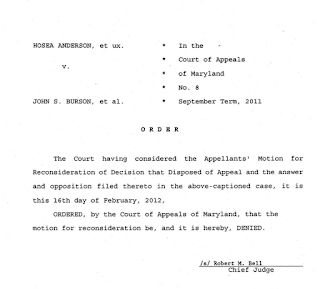 Next up is Anderson v. Burson (listen to my prior interview with Hosea Anderson at bottom) along with the Reconsideration Motion. Soon there will be an in person interview as well. Says Mr. Anderson: 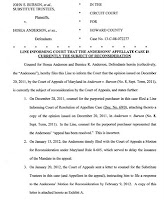 "They lied to the Bankruptcy Trustee and to the Court.... It was just a servicer at the onset, Saxon. Deutsche was nowhere around.... There are two different Deutsche entities, after a while they claimed it was Deutsche America -- but it wasn't.... They then filed a bogus allonge some 9 months later, saying it was Deutsche National.
"Now they have already sold the house and ratified this, but they have made the same mistake all the other courts have. The Court of Special Appeals and the next court have both issued wrong opinions, so they are going to have to address that. We've got them all in a box, they can't issue contradicting affidavits in BK and in the Court of Appeals." 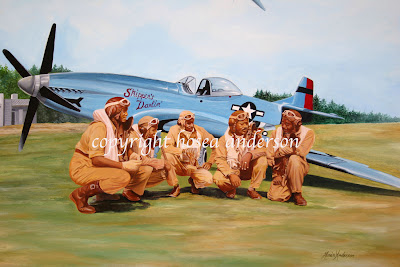 Sounds very familiar. What a joke it is for these judges to allow such nonsense to happen in these courtrooms. I have been researching bank and security fraud for a while now. Time and time again I see that the banks are being allowed to use false documents and hearsay to win these cases. They need to prove:
1.) That the mortgage was legally transferred and part of the security?
2.) If the mortgage is in the security, where are the proper assignments moving to each entity in the security?
3.) Once in the security where is the assignment to remove it from the securitized trust.
4.) Was the mortgage paid off by insurance once it went into default.
5.) Sounds like a few of these entities should be prosecuted for RESPA violations?
No homeowner deserves to be taken advantage of. Good for you and good luck. I will never stop fighting my mortgage company. There is fraud coming out there ears because it is so abundant. I will bring these banks down in my case, and help anyone else who wants it. America, LAND OF THE FREE, HOME OF THE BRAVE!