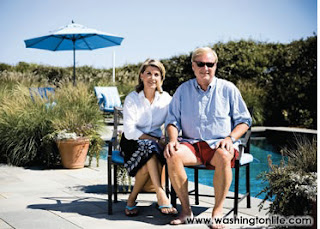 “I can’t tell you how serious this company is about dealing with these issues head-on and doing the right thing, but also fighting where we think we should,” she said last week.

The problem is, she is full of shit, just like Kelly Ayotte on banking (watch the town hall meetings one in which a constituent says she is "full of shit" and two, in which she has no response as to why she continues to ignore the forgery of my name to a mortgage). They are in good company with her husband, the ever-plagiarizing Mike Barnicle, who resigned and/or was shown the door from the Boston Globe after not one, not two but three incidents of alleged and probable plagiarism and outright fabrication as noted in a great story "For Mike Barnicle, one controversy too many" by Sinead O'Brien in American Journalism Review. And Dan Kennedy documented much much more.

Somehow in today's story not one but two seasoned journos Louise Story and Gretchen Morgenson ("Reckless Endangerment" -- great read) of the NYTimes missed the Bill Clinton issue and the outright fabrication of the child cancer victims to report only the alleged and more minor pirate issues against George Carlin (RIP). Not only that but the entire tone of the story read to me more like softball city than knock out punch, as it implied that Bank of America picked up Countrywide out of some sense of integrity when in point of fact many are saying that BoA is just as bad, if not worse then Countrywide. All I can tell you is that we are going to get to the nitty gritty with these fools. We are about to start putting up certified cashier's checks to BoA on Presentment and demanding the original note and mortgage hahahahaa...... and when it doesn't appear we have title companies at the ready to convey the property to the rightful owner, you stinking liars.
UCC §3-501.
UCC §3-603.
UCC §3-309.
Article 8 when securitized.


Your whole scam is going to hit you in the face like the proverbial lawn rake. Anyway, how is it that we lose George Carlin but have these dirtbags still blighting our horizon with their fifth, lies and morally repugnant corporate ethos? Nobody said life was fair, I guess.... but anyway I would not trust Anne M. Finucane any further than I could throw her and her lying husband underwater in their backyard pool... or in the cesspool where they belong. Just saying.
Posted by Christopher King at 10:09 AM