KingCast says Roman Catholic Bishop is full of shit in Judge Landya B. McCafferty recusal, can't even tell the truth about how long she has been on the case. 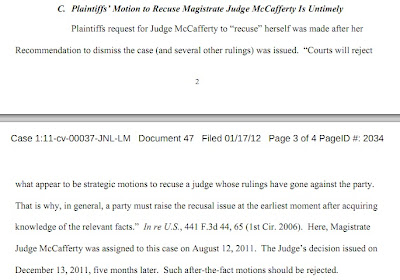 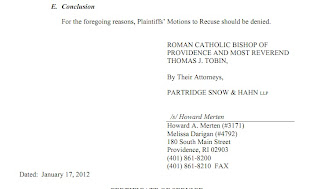 So now August 12 to December 13 is now five (5) and not four (4) months? Jesus Fucking Christ already, stop the nonsense. Man-oh-man these people are just so sublimely full of shit. And don't dare get on me about vulgarity because I see what is vulgar and profane clear as a bell and it's got nothing to do with me, I'm just the messenger.......I read their Memorandum in Opposition to 28 U.S.C. §455 Recusal and this is all I have to say to the Plaintiffs:

You gotta bring up all the McCafferty recusals you see on my blog and demand to know specifically why they were occasioned -- including mine, that will really toss a monkey wrench into the mix.

You gotta explain that nothing is strategic and write an Affidavit that you only recently found out about the connections after due diligence and that August to December is hardly a long time.
You gotta say that the ongoing pattern and spectre of sexual abuse and ongoing coverup is what is paramount here when they try to narrow it. 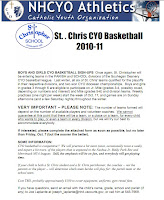 The bottom line is that there is indeed a potential financial impact to the McCafferty family if the Diocese goes down in this case, and they try to dance around it but it is unavoidable..... and Judge Joseph LaPlante's association seems a tad cozy too, what with using his U.S. Courts email address for contact ....
Also the school never telephoned me back, ahem.... and I love the way they say Patrick J. McCafferty "allegedly" works for St. Thomas Aquinas, LOL.
Dear Mr. McCafferty,
There has been substantial concern from some people that your marriage to Landya B. McCafferty provides Just Cause for her recusal in Ryan v. Krouse, a case involving the Catholic Diocese.

http://christopher-king.blogspot.com/2012/01/is-landya-b-mccafferty-embroiled-in-yet.html
The school admin told me that she was asking the Principal for verification but I have not heard anything back yet, and the Clerk of Courts would neither confirm nor deny your marriage to Magistrate McCafferty.
Wherefore in the interests of 100% accuracy I figured I might as well go directly to the source and ask you. Thank you in advance for your time, consideration and prompt response and best wishes in the New Year.
Sincerely,
--
Christopher King, J.D.

Hey There. I found your blog using msn. This is a really well written article. I will make sure to bookmark it and return to read more of your useful information. Thanks for the post. I will definitely comeback.
Install Bay Heat Shrink 1/4 Inch x 100 Feet