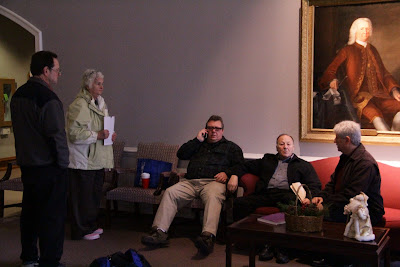 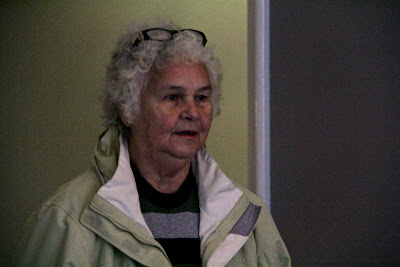 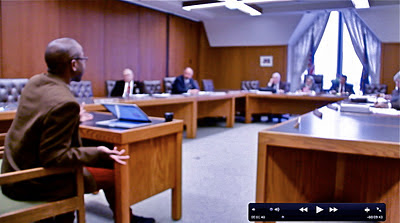 "Standing is a basic tenet of American Jurisprudence....."
15 Dec. 2011 we came we saw we rocked it, video of our testimony coming by tomorrow. I got off into Senator Ayotte's willful failures and transgressions on the mortgage front as well. Major press was there in the form of Union Leader's Tom Fahey, stills to follow as well. And for the distinguished members of the Committee at the bottom of this page I present the Shawn Masterson video before Judge Diane Nicolosi as he tells her "My client Wells Fargo and I have reviewed the original note and mortgage and it is in my desk," yet somehow never produced. 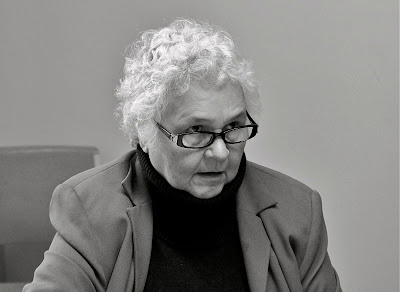 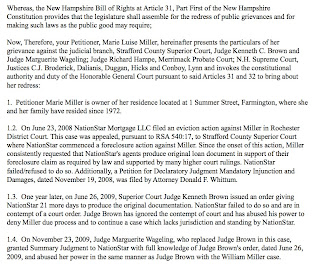 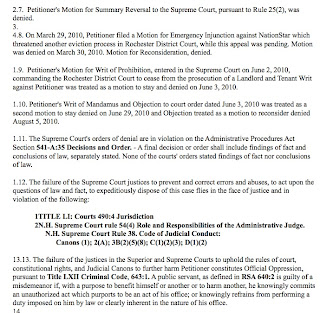 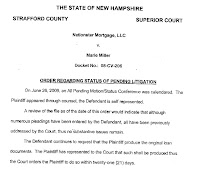 Note: People need to contribute to help Marie Miller raise $1K to pay for Rod Class' travel expenses to drive up to NH for her 10:15 hearing on Thursday, 15 December 2011. You can watch my work with Rod Class and Carl Weston down on Capitol Hill earlier this year; NH Senator Kelly Ayotte hates my Capitol Hill visit to her office just as much as she hates my erstwhile colleagues at the Ohio AG Office, including Richard Cordray and Kent Markus. She and her Republican Cronies down-voted Richard Cordray as CFPB Czar last week.


In this journal entry I showed how State Rep Timothy B. Comerford got involved so that Marie Miller apparently prevailed in her case, only to subsequently find that they reopened the case that was allegedly dismissed by NationStar. Ms. Miller asked that the Withdrawal be clarified as to whether it was with or without prejudice, a reasonable question. The Court then stated that her request reopened the case, but the question remains why there is a case in the first place given that NationStar should squarely be held in contempt for its failure to produce the original mortgage and wet ink note, when the failure to provide such items properly results in dismissal, except in New Hampshire as we see with Judge Diane Nicolosi and foreclosure mill attorney Shawn Masterson. But see how it is really supposed to work as you review NY State Judge Arthur Schack, AZ Bankruptcy Judge Eileen Hollowell and Judge Christopher Boyko from my former Federal practice venue when I was AAG and in private practice, prior to becoming a title insurance producer.

Posted by Christopher King at 9:17 AM