KingCast and Mortgage Movies shudder as Maryland manufactures Standing for Morgan Stanley out of thin air in Anderson v. Burson.

Here is your Anderson v. Burson Back Story. As far as stories go, major media needs to start doing with I have been doing for the past year, i.e. interview these people and get their butts into these courtrooms for actual coverage of these travesties of Justice wherever possible: NY and PA trial courts forbid cameras and their legislatures allow the denial of media coverage, so they are of questionable integrity and one might call them complicit in the Fraud, accessories after the fact.


So Mr. Anderson calls me today, 5 Jan 2012.
"This thing never should have got past Bankruptcy Court," he says...as I commend him on being an artist. He's a painter. "And I commend you on your art and what you do it takes skill, knowledge and guts." Which is the second time today that a total stranger told me those exact same words. I got the first one on video a few hours ago when a passerby in Nashua, NH saw me covering the Mike Gannon police abuse video fiasco.
More on this later. 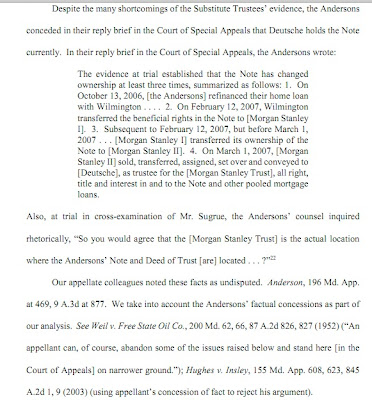 The Decision is in, and it's Not Good. The Court used the Anderson's mere acknowledgment that the Morgan Stanley Trust held the note as sufficient under the Shelter Doctrine, and basically awarded standing out of thin air. Disgusting. When you are litigating these swine never admit to a goddamn thing, got that? Not even Jurisdiction. Lesson learned. Another lesson, intimated at the back story link and seen in the ruling is that the Court is reviewing this as a document and not as an instrument. This should go to SCOTUS, IMO.
With Decisions like this, who will hold robo-signers like Bethany Hood and Fein, Such & Kahn accountable for their illegalities? (watch the movie). The answer? Probably no one. It's a bankster's World folks, we are just mice trying to protect some stale cheese. Some of my family members work for such banks, I love them still but hate who they work for I'll say that much. 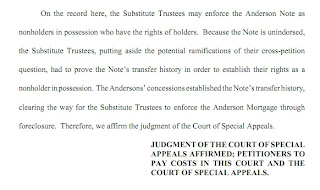 Here is the Burson back story.
Posted by Christopher King at 5:59 AM

The Decision is not All Bad for those who know to challenge signatures and jurisdiction and never admit to any sort of ownership of the note.

If you were savvy enough to take that route then take this case, distinguish it and flaunt it in their faces.

It's as if I don't know whether to be happy for the language in the hard core dicta that helps us... or to be sad because in the end it is simply another example of a Court finding whatever it can to screw a little person and reward the banks that directly affect and manage their CAFR and Pension accounts.

Another day on the Plantation, sigh.