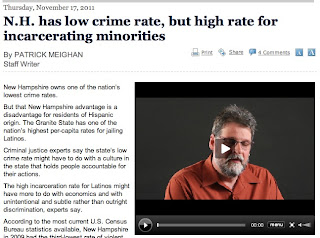 The higher incarceration rate for minorities can stem from a number of factors, such as policy set by legislatures, stepped-up policing in communities and neighborhoods with large minority populations and decisions made by people in the criminal justice system, said Marc Mauer, executive director of the Sentencing Project.
Here is the story. Don't forget the 1944 Bretton Woods IMF Party as backdrop. I don't have time for this right now but just read this word search in the top left corner for "Ralph Holder Brian Cullen."
I wrote: Hey Pat..... Hmmmm..... Remember the bogus and failed attempts (all charges dismissed) by NH AG Kelly Ayotte and now fired Jaffrey, Police Chief Martin Dunn to try me for attempted felony extortion when I was NAACP Legal Chair?
Turns out they never even investigated the 3 loaded guns in Wille Toney's face or the visual body cavity search for LOITERING the precipitated the NAACP Demand Letter. I mention that in the new Kelly Ayotte town hall video right here: http://www.youtube.com/watch?v=hyPV8dQvoxE
Also on my blog search "Dave Coltin." He's a white guy and they put the screws to him, watch for his video at the Judicial Confirmation hearings I shot here:
http://christopher-king.blogspot.com/2010/11/kingcast-dave-coltin-mike-puiia-and.html
And lastly, watch the ongoing fiasco of State v. Glenn, 2008-912, in which a white so-called witness perjured himself and the State withheld exculpatory evidence about him having a gun permit and illegally shooting the same caliber handgun as the one that killed the decedent.
http://christopher-king.blogspot.com/2011/06/state-v-glenn-case-no-2008-912-shows.html
Nice work.
Not.
Posted by Christopher King at 7:41 AM

Looks as if Meriden CT Police Department might is heavily involved, my Internal Affairs complaints is hastily deadlocked with no returned phone calls for a week, even after I contacted a next in charge who placed a sticky on his computer monitor. FBI already showed up there a few months ago investigating corruption. Law Enforcement is out of hand America, stand up before we become enemies of the state for seeking our inalienable rights.......I am willing to fight,and fight hard. We came to far to start going backwards. Our forefathers didn't swing from branches so that we would give back what we have gained. Get thee behind me......