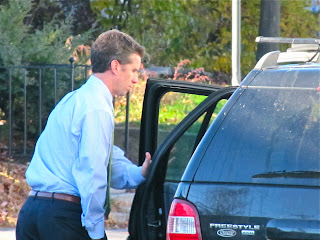 Background link: Ralph Holder filed a Rule 60b Motion to reopen his Federal Civil Rights lawsuit because the State of New Hampshire with Nashua lawyer Brian Cullen (l) at the helm, clearly tainted his Civil Rights case by illegally and immorally withholding the EMT Report. A signed copy of this document will be available online later this evening, perhaps along with a quick KingCast video. I truly hate to replace the beauty of this weekend's post with this ugly stuff, but I have to do my job, and part of my job is to document the ugly stuff that masquerades as law, justice (and far too often) media here in New England. Writes Mr. Holder:

Whether CULLEN prepared to introduce the report or not in the civil suit is irrelevant to the issue.  It was clearly not turned over in the criminal trial or the federal and state civil law suits.  CULLEN and his clients concealed the report while continuing to falsely argue that there was evidence that an assault took place and HOLDER was the perpetrator.  The EMT report clearly establishes reasonable doubt as to whether an assault ever occurred and  openly  refutes the  claimed  observations and testimony of former Newton PD officer Joseph SALUTO.   CULLEN deliberately denied  me my constitutional and procedural due process right and appears to have suborned the perjured testimony of Officer SALUTO.


CULLEN never produce[d] a copy of the letter to BRODEUR he claims he originally sent
to Fire Chief INGALLS.   Fire Chief INGALLS and Town Manager WRIGLEY have so far completely refused to respond to my valid RSA 91-A for a copy of the investigation
of the two officers regarding my complaint, STREETER claimed in his prior deposition took place.   There is no legitimate reason to trust anything that comes out of  CULLEN’S  his mouth  or any document that he personally submits in this grievance that is not independently certified.    CULLEN deliberately tries to deflect attention away from his role in the matter by suggesting to BRODEUR that I violated the Bail restrictions  by having contact
with my daughter to obtain the dismissal, yet produces nothing to support his claim.


.....The EMT report and SALUTO’s verbal admission to me  that night there were no signs of physical injury can reasonably be interpreted as CULLEN and STREETER conspiring to suppress and conceal the report to cover-up to protect his client and his reputation as an attorney.  It would have a significant adverse impact on his future clientele if CULLEN lost a civil suit and this grievance against a  Pro Se complainant.   CULLEN’s  obviously  trying to build his defense  on false rumor, speculation and innuendo.
Posted by Christopher King at 9:03 AM