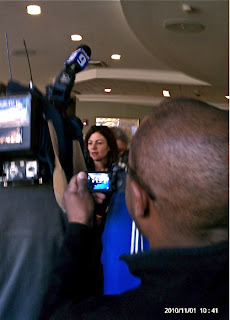 The Free Press Federal lawsuit in KingCast v. Kelly Ayotte, NH GOP and Nashua PD will be heard on a Motion to Dismiss at 11:00 a.m. Monday, December 5 at the Federal District Courthouse. The case is being heard by a visiting Judge from Rhode Island, John J. McConnell, after Magistrate Judge Landya B. McCafferty and all other NH Federal Judges recused themselves. McCafferty worked at McLane, Graf, the same law firm where Defendant Ayotte worked and where Mr. King's opposing counsel currently work. Co-Counsel Jennifer Parent is the current Massachusetts Bar Association President.

http://christopher-king.blogspot.com/2011/11/case-western-reserve-law-school.html
Ridley Report followed this case for some time, and noted:
"But there is a political price to pay when you invite the media to your events, then pick and choose which reporters to kick out. And when one of those reporters fights back in court, it's appropriate to observe, to tell the public what happened in there." v=L_vWi3JFpLY&feature=player_embedded
**************
Some back story is here with movies of me with Kelly and in her Office on the Hill discussing CDO/Mortgage Fraud that she ignores to this day, and the lawsuit is here. Boxing had the Thrilla' in Manilla, but Free Press has the Villanova and Case Western Law School meetup on Monday. Neocon U.S. Senator Kelly Ayotte, fresh off a scary detention initiative on her attempts to detain (and likely torture) Americans without hearing, is now set to explain how she can invite members of the public and press to Senate campaign events, then pick and choose which ones can stay, a la John McCain and Stephen Price. The ACLU was rightfully cringing, and former LE and current U.S. Passport Inspector Ralph Holder today initiated a Kelly Ayotte Recall Petition. Funny, but when I was NAACP Legal Chair in Ayotte's NH my very first post in 2005 was on the Patriot Act. She can't stand me or my cameras or my affinity for exposing her lies, some of which are soon to appear on the Big Screen relative to the double homicide Bruce McKay, Liko Kenney Greg Floyd Franconia shooting tragedy. Anyway, I explain some of this to Boston Journo Dan Kennedy in his Mitt Romney/Tricky Dick journal entry. 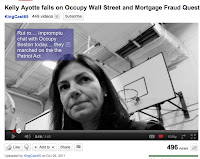 Kelly Ayotte graduated from Villanova, which is certainly no slouch school, it just occupies a space a bit lower on the food chain than Case Western Reserve, which is the alma mater of Judge John J. McConnell and Yours Truly, as noted in the video: "They don't graduate any dummies." But in Kelly Ayotte, Villanova certainly graduated an open government and free press hater.... and to me, that's just plain stupid and Unconstitutional. And remember, even though the Court won't admit it, I clearly won my Motion for Recusal, Kelly and her pals lost theirs. Photo by SHE. 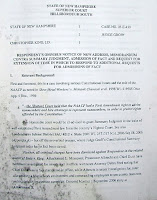 PS: Thanks to McLane, Graf for reminding me how wrong and stupid Kelly Ayotte was when I used yet another NAACP First Amendment case, NAACP v. Button, to fend off another First Amendment beat down back in the Day when Kelly's cohorts took 3 guns to a black man's chin and visually body cavity searched him for LOITERING. Yeah Monday is going to be a KingCastic day I'll say that much. State Debate finalist in High School. First Runner-Up to another Case Western grad in law school Moot Court for the entire midwest BLSA region.... When I step to the microphone haters fear it.
Mclane Law Firm (64.61.32.55) [Label IP Address]    0 returning visits

Posted by Christopher King at 5:57 AM

An internal affairs complaint with the Meriden CT Police Department will show that New Hampshire conspired with Connecticut law enforcement in perpetuating the violating of mine and my sons rights to be free from abuse and neglect. A pretty white woman can almost kill black children and law enforcement in New England will help cover it up. Are the Feds going to act? This is why I continue to throw punches, I don't know what side the Feds are on. Sgt Capinigro, Meriden PDIA had better find some answers, as should States Atty Kevin Kane, who admits in an email he has had my allegations since 2010 and done nothing! Is he covering for state employees? I need to check his track record, as I told him.....

Mr. Holman:
Heavy on the "white" and light on the "woman", please. There is still constant discrimination against women...

More importantly: Keep throwing those punches. Somebody has to stand up and change things in this world. As you have proven, nothing will change on its own.
God bless.

Hope to see some of y'all on Monday, it's going to be a KingCastic event......

you're popular. You may be my neighbor in one of those empty FEMA camps in Alaska. Specs say one camp alone can hold 2M people. With 800 across the U.S. sitting empty but fully manned, looks like they are waiting for something to happen and we're probably on that "list". Keep pushing.