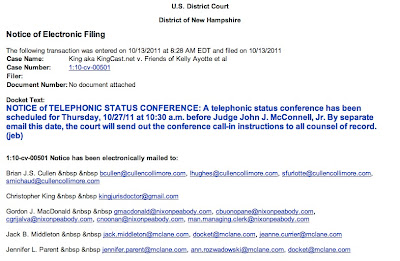 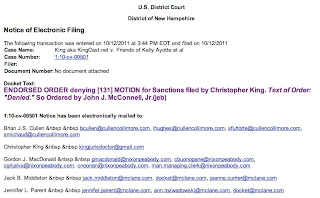 Update: Read the comments carefully and read the new screen capture at top noting the telephonic status conference scheduled for 27 Oct. 2011. I am going to inquire if that is to be a record hearing or not. Headed back to Boston stay tuned for my Renewed Motion to file a Third Amended Complaint based on Kelly Ayotte's Chief of Staff Defamatory comments about me and Nashua PD's continued unconstitutional actions against those who video them, i.e. Dave Ridley and Mike Gannon.


They said I was disbarred, a lie.
They said I never offered up any case law on why Judge McCafferty's Report and Recommendations should be vacated, also a lie.
Read the Motion for Sanctions.

These guys can apparently say and do whatever the hell they want to, fascinating. Let's see what the Court says about the Interlocutory Appeal however, as common sense dictates that the decision of a Judge who had ethical issues manifest prior to issuing an adverse ruling should be set aside when the affected party has thoroughly documented the factual problems in the ruling. Here is the Open Letter to Rhode Island ACLU.


Oh, wait. That Motion for Interlocutory Appeal Certification of the record was denied as well, even though Judge Barbadoro didn't even issue a proper written Order when he denied the request, all the more fascinating. Let's see if it turns into a sanctionfest where I'm the one in the wrong. Frankly nothing would surprise me at this point. Now that having been said, what is perhaps more important than those items is the Third Amended Complaint showing the Nashua PD pattern and practice of unlawful and unconstitutional contempt for journos and citizens who shine cameras on their malfeasance. So tonight or tomorrow I will renew my request to have that filed. Stay tuned.

Posted by Christopher King at 1:39 PM

It is very troubling to see that I have set out some very serious issues that still receive terse, one word denials. The brief I submitted in terms of the issue of vacation of Judge McCafferty's Order had some serious citations in it and the issue is one of substantial controversy. Law firms and law students have written treatises and law review articles on it, and the matter clearly relates to the prosecution and/or termination of this case one way or another.

I will check any and all available options including a direct appeal to the First Circuit Court of Appeals noting that the lower court has refused to address the issue.

Also I've got some lawyers reviewing for case law for the basic proposition that subsequent actions of Defendant Nashua PD the tend to show pattern policy and practice of unlawful conduct toward citizens and media who record them should allow me to file my Third Amended Complaint.

That is all common sense, they are all good and sound arguments and goddammit I am going to make them and preserve the Record as we head toward SCOTUS.

Everything you have documented proves an abuse and bias against you, most likely due to your race. You would probably need to be out of New England to get justice, that is how far I had to be to get Congressmen to take my side initially. Hang in there, this case is a perfect example of judicial misconduct and a corrupt system in New Hampshire.....