KingCast asks, "Is this white dad seeking to see his children the latest nigger in New Hampshire?" 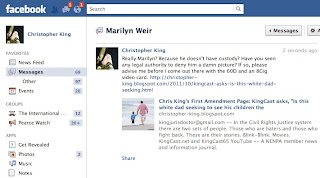 I am informed by a former LE that the only  Restraining Order ever granted was bogus and withdrawn.  As such, it looks like another Michael Holman (video) or former LE Ralph Holder read links at bottom of Judge Dalianis Confirmation Hearing (and more) situation. Both of those men of color tried to invoke Federal Jurisdiction but have been laughed at by a corrupt system. Meanwhile in MA/NY I see a scumbag "Deadbeat Dad" eMusic CEO Adam Klein get away with bloody murder as he neglected his less-favored daughter. He saw her less than 10 times in 20 years and welched on a child support agreement. Here then at my former LE brother Jaye Rancourt's journal are the allegations of the father Dan, relative to Fitzwilliam NH shenanigans where he can't even get a picture of his child from the Municipal photog:


I am the biological and legal father of two children.  My ex has custody and I have visitation which I have not executed for some time due to several factors.  I have no restrictions in the decree which deny me any access to information on the kids.  According to the decree I have every right to talk to anyone and obtain information from anyone involved with my children.
1.  My ex forced me to stop seeing the children by calling the police on me and getting frivolous restraining orders on me.  She caused me to fear being arrested so I stopped all visitation.
2.  I moved several hundred miles out of state to get away from her making the tough decision to leave my children behind which at the time were showing serious symptoms of PAS.  I have routine telephonic contact with the children.  My oldest son who is 12 YOA shows extreme symptoms of PAS where my 8 YOA son shows advanced symptoms.
3.  My ex has been to a counselor in the past and I can say that in "My opinion" she has major issues.
I have never been able to prove interference until now.  Here is an email to show the interference.  Keep in mind, I have been trying for three years to get pictures of my children.  I have no idea what they even look like anymore.
When you read what is in the email, keep in mind that I had to jump through hurdles with the Town of Fitzwillam Recreation department just to get a schedule and a picture order form.  It is apparent from this email to me from Marilyn Weir the photographer that she spoke with my ex Norma who told her that I could not have any pictures of my son.
Here is the email starting with my first email, her response, my response and her last response:
Hi Marilyn:
I am writing you to get some pictures of my son Jonathan Reppucci.  He is on Team C JR level in the Fitzwilliam Soccer League.

I live out of state so I could not attend last saturday when pictures were to be taken.  I have an order form that I obtained from Julie Green the recreation coordinator and can send to you.  I realize by reading the flyer that the pictures are not mailed but delivered to the coaches.  Since I am out of state, I will not be able to pick them up.

I would appreciate you mailing me my pictures once I place the order.  Could you let me know what the charge would be for mailing the pictures to me.  Also, do you take credit cards or do I need to send you a money order?

Thank you for contacting me about Fitzwilliam Soccer photos.
I was out most of the past two days and am just catching up with emails.
I do not have a photo of your son. I don't photograph every child individually, only the ones whose parents are placing an order.
So unfortunately there is not a photo for you to be able to place an order.
Thank you again for your inquiry.
Best Regards,
Marilyn Weir
Marilyn Weir Photography
603-924-3405
PO Box 3153
Peterborough, NH 03458
www.marilynweirphotography.com
Award-winning member of N.H. Professional Photographers Assoc.
Member Greater Peterborough Chamber of Commerce
I responded back with the following:
Marilyn:
Since you are telling me that Jonathan did not have an individual picture taken please let me know how much a team picture would be.

Thanks, Dan
Her last response was:
Hi, Dan,

Jonathan's mother contacted me.  She learned that you had contacted the recreation coordinator for information for ordering soccer photos. She let me know that she has custody of the children.
Under these circumstances, I am not free to honor your request to order a team photo. You will need to order any photo prints through her.
I am sorry for any inconvenience this may cause.
Best Regards,
Marilyn Weir
Marilyn Weir Photography
603-924-3405
PO Box 3153
Peterborough, NH 03458
www.marilynweirphotography.com
Award-winning member of N.H. Professional Photographers Assoc.
Member Greater Peterborough Chamber of Commerce
Posted by Christopher King at 4:56 AM