KingCast and Bobby Knight tell McLane Graf lawyers, GOP Lawyers and Nashua PD lawyers on Judge Barbadoro's recusal in 2010-CV-501: "We will run your ass right into the fucking ground!" 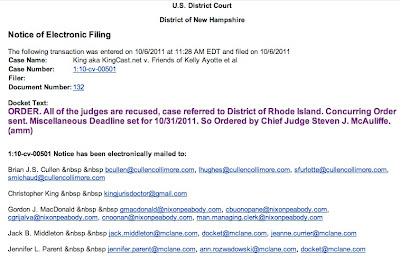 The Truth.... they can't handle the Truth. 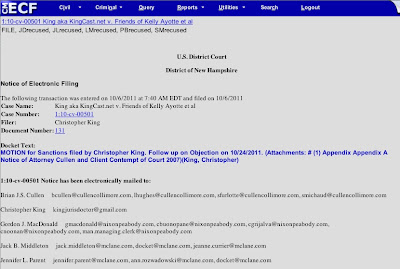 9:43 a.m. update: They have run out of Judges and the case must be transferred. DiClerico recused on 4 Oct. 2011 LOL guys, you have totally lost control of this case. Nobody wants to protect their fucking bullshit anymore, hahahahaa.... what a hoot.
Look, I simply do not give a fuck what your title is, who you work for, or any of that shit. If you are a lying-assed attorney I am going to break your face in public. Now another Judge has recused from the Federal Bench, leaving only DiClerico... who has ruled against Kellly Ayotte before in Ayotte v. Planned Parenthood. Interestingly enough, the lawyers from that case regularly read my journal. Ain't that special? Methinks so, particularly because I am the only journo to place copies of the two $150,000.00 settlement checks online after Ayotte claimed "victory." 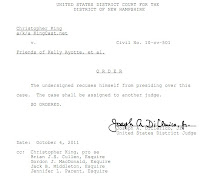 This is what I call a royal ass-whupping. Yah, It's gonna' leave a mark. Who is going to Certify the goddamn record now, huh?
KingCast Emergency Motion for Rule 11 Sanctions against Brian Cullen, Gordon MacDonald, Jack Middleton and ...

Update: The Defendants are fighting to prove that I have no right to Interlocutory Appeal even after Judge McCafferty recused herself (in an underhanded back-door fashion mind you) based on conditions that pre-existed before she authored her ridiculous Report and Recommendations. As to Judge Barbadoro, he did not work at McLane Graf to my knowledge so he had no reason to recuse himself other than the fact that he has proved himself to be Judicially biased in his rulings, many of which were issued in underhanded back-door fashion as well. Not to mention the fact that he had no legal right to tell me not to file any more pleadings because there was no finding that I had filed any frivolous pleadings to start with. Continue on guys I really don't give a shit what you do because your cover was blown a long time ago. You are dying the death of a thousand cuts... a nick here, a nick there... and pretty soon you've bled out all over the court from that sliced backhand down the line, a la Blackenroe style. 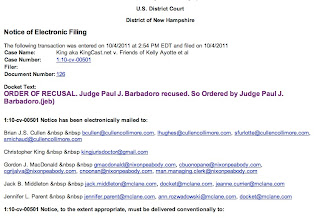 My how they are dropping like flies.... First I won when I force Landya B. McCafferty to recuse herself and now that I busted Judge Barbadoro for issuing Unconstitutional Orders and demanded that he certify the record for Interlocutory Appeal he takes a powder as well.  Now I dare anybody to tell me I don't know what the fuck I'm doing when I sit down to litigate a First Amendment case, you can kiss my narrow black ass. And it's only going to get worse if they don't settle, remember I had a non-monetary settlement Demand on the table months ago that they ignored when they thought they could fuck me. Well I'll show you motherfuckers whose gonna' be doing the fucking around here because my ass is exit only, you got that? Good. Motherfuck you and your hand-picked judges. I don't have much time for this shit right now I have a film shoot in New York to get to but I will say this: Everyone in this case looks like a complete asshole except me.
And yah, I'm still watching Civil Rights like a hawk!
Posted by Christopher King at 12:39 PM

So help me god I will spank that ass like a red-headed stepchild.... and no matter what they do now, or what judge gets on the case and dogs me out next, they all look more than a bit guilty.

KingCast is the winner by TKO.

Corrupt judges on the bench, how could that be? Must be Michael Delaney doesn't mind a corrupt state, government or judicial system. The Feds need to indict these people and the evidence is clear, racial injustice without regard for the laws of this nation......criminals.

Meanwhile back to the issue of who is going to Certify the Record for my Interlocutory Appeal on the Court's refusal to Vacate Magistrate Judge McCafferty's Report and Recommendations now that she recused herself based on issues that existed BEFORE she wrote it?

You see how fucked-up this case really is?

And that's because they were all in a gang, using bad processes to arrive at a predetermined place, i.e. a finding of non-liability.

They have truly lost control of the case and there's no ifs ands or buts about that, when two Judges recuse like this it goes down in history as a serious battle scar.

Stay tuned, I'm just going to sit back and watch for my opposing counsel or the Courts to make the next move, I know when I'm in control of the situation.

Time to fire up the Triumph, blow the carbon out of that underseat race can and head out for a ride. I have to check when I get home but my new Dunlop Sportmax Q2 rear tyre should have arrived in Boston, I hope I can get that bad boy mounted today and properly scuffed-in so I can go carving the next few days.

You know every time I whack that throttle open I imagine just ripping a wheelie right across their collective aorta, then choke 'em right on out with a plume of unburned hydrocarbons on the 1-2 upshift.