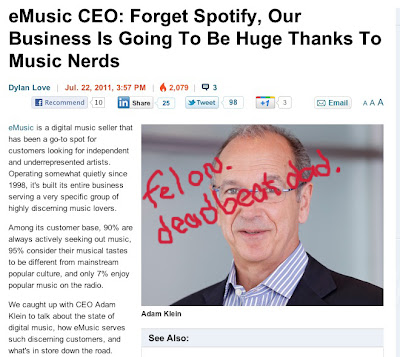 COMING UP OVER THE WEEKEND: A SHORT EDITORIAL ON WHY MASSACHUSETTS KEEPS CERTAIN CHILD SUPPORT CASES IMPOUNDED SO THAT THE AMERICAN PUBLIC CANNOT SEE THE FAVORS THEY GRANT RICH, PREDOMINATELY WHITE MEN.
I think it amounts to a Constitutional Deprivation against the media and against the children who are getting screwed because they have lost a measure of their
First Amendment Rights to discuss these matters publicly.
And with 530 views... here are some of the South African documents.
I will be damned if I take any shit from anyone on this, because I won't.
And the Court needs to stop shitting on Daralyn Khan as well,
a Day of Reckoning is going to come.
And it's going to come on the end of my Canon 60D.

Dear Spotify CEO Daniel Ek: Spotify is cool. Adam Klein is not, so whatever local folks he is consulting with (read this Business Insider story) to make a run at you are scum for working with a guy like this, a complete douchebag, IMO. His baby's momma and his own daughter called him the "scum of the Earth" and a "deadbeat Dad" in the ongoing travesty of Justice in the Cambridge Courts. South Africa and I call him an International Felon for embezzlement, and I will soon be at the Provost Office at Columbia to ask.....
why they continue to employ someone with his background as an adjunct journo professor when there are plenty of other responsible corporate directors they could have used. And don't even try to have me arrested folks, I get my one question, you get to ask me to leave and I leave, with my footage, that's how that goes so don't try any bullshit or I will sue you. I've had relatives work in the music industry and to me, how this guy is on the NARM Board of Directors is beyond me. As to eMusic I guess they want him to run their business right into the ground as he has apparently done with many others, some of whom posted their separation agreements with this turd, linked below.

Enjoy the reads, if you want I can start shooting a commercial spot with my new Canon 60D, it renders exemplary video and great audio with the Rhode SVM, and I am now learning Final Cut Pro to replace iMovie..... it will be hootlarious!


Newbies start here and here and be sure to read the KingCast Open Letter to Columbia Provost Steele with eMusic CEO Adam Klein's South African rap sheet. Found it again, I was just looking too fast... the tweet from Adam Klein's daughter... the daughter K_____ with whom he has spent face to face time approximately twice in her life 21 years on this Planet. Fascinating.


Here's the back story about Adam Klein one of Lee Levine & Bowser's more illustrious clients, a man who has overcome the extreme adversity of a having a Felony Conviction on his record to head up countless top-notch communications and entertainment companies including VideoEgg, Muze, Ask Jeeves (24 July 2000 Employment Contract and 28 March 2001 Separation Agreement with a Cambridge, Mass address), Hasbro and 23 March, 1999 Separation Agreement same address), and now eMusic (no Separation Agreement yet, ahem) with an adjunct position at Columbia's J-School, which may be prompting Time Magazine to consider him Man of the Year. I would support that development because it would undoubtedly lead to increased income, and that could then flow to his daughter in a bitterly-contested child support case. Not to mention the cost of keeping  up those $11M digs at 15 Central Park West. Speaking of income, I have heard many months and years ago that he has never produced any meaningful financial statements...... and got away with it thanks to Judges like Spencer M. Kagan, who wants me to remove his name from my journal (read the jump page), sorry Judge no haps until Klein's daughter gets Justice. That's how it's going to be and I'll tell you just like that.

Posted by Christopher King at 9:50 AM