KingCast buyer's guide to the Triumph Sprint 955i and other Hinckley Triples. 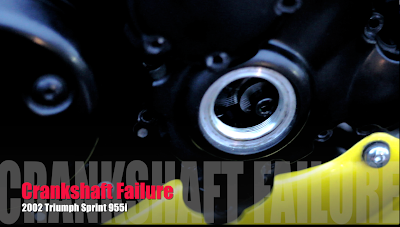 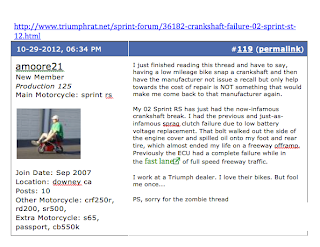 Don't look now but it happened again, on a pristine 13K miles bike.
Movie upload issues, wait for it. 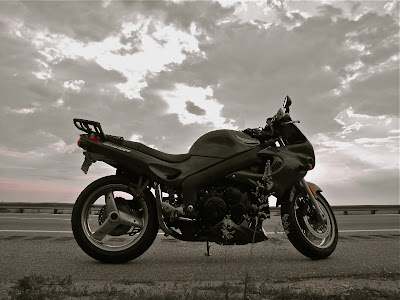 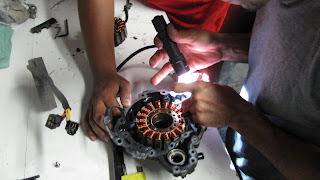 23 July update: Things are finally sorted, except for a slightly loose exhaust gasket, another PITA. It is ever so slight but I am a perfectionist and I can hear it when I take the earplugs out. The high load cut outs mentioned at bottom finally turned out to be a simple loose battery cable. I got a break for once. Anyway the bike runs so strong it's like something out of a cannon, yet tractable. I might in some ways prefer a twin only because of the realities of Boston area riding, tight and crowded, but OMFG this bike, with the freshened electrics, Powermax exhaust and an 18T front sprocket is one serious machine.
***********
First off, I love my bike (video). Second, I hate my bike -- and with good reason. I have ridden motorcycles for 38 years now and owned 8 street machines and ridden a little bit of most everything out there at least once. Only two of my bikes were new, the others have been between 3-10 years old and none of them have shown me the grief experienced with Bessie. Below the fold I will discuss the problem areas of these bikes to help others avoid the pitfalls of my ownership. To put it simply, despite a good service history and a clean bill of health at 12K miles when I bought her this winter, now at 20K miles despite fastidious maintenance scheduling and top quality motor oil, etc., I have replaced an engine, replaced the charging system and replaced leaky fuel connectors (a free factory recall, whoopie....). It has honored the stereotype of dodgy British electronics and reliability, for some reason I keep coming back for more, despite the fact that a Jaguar almost left me high and dry as chauffer at my sister's wedding. Dad was not then smiling.

1. The shattered crankshaft: Video.
I haven't filed this lawsuit yet but that doesn't mean that I won't. I have new information from an engineer who has been working on it, and a former Triumph service manager told me that there were faulty heat treatments in or around the 2002 model year. What happens is with a low battery because of the sprag clutch configuration, you shatter the crankshaft at the cam gear. $1,850.00.


2. The charging system: Video coming. Triumph put a POS regulator/rectifier on these machines and too-small wires coming off of it. When it fails it takes the stator with it..... Which is of course all the more likely to cause you to have a low battery. Aftermarket parts from Rick's in NH + labor (at a discount at my friend's garage, East Coast Motors) $440.00.
Note: This is still a problem on the new 675....

The first time, I had the stator and regulator rectifier replaced under warranty after about 12,000 miles. The dealer didn't know which one went bad, so they just replaced both.

It's been about 2 years since then, and I never really trusted the bike. I've only ridden it about 3,000 miles since then and it's doing the exact same thing.

Since the bike isn't under warranty anymore, I figured I'd take it upon myself to fix the problem rather than paying Triumph for their own design flaw.


3. The fuel connectors: These were POS plastic pieces that have been replaced under factory recall $0.00.


5. The gas cap: It has been raining a lot and a few times I didn't get the bike covered. I hadn't lubed up the lock in a couple months so it's part my fault but the goddamn key snapped on me. So I drilled out the hole and just use the end of the key it still locks and I put a dime-sized dab of silver ductape over the drill bit hole then the key flap fits snug over that until I buy another one lock and key set. Whatever, I have mistreated other bikes when I was younger much worse than that and I never broke a goddamn key. I now have a second nickname for Bessie.... "Christine."


Of course the rectifier -- known to reach searing temperatures resides in a nearly inaccessible spot near the battery box (which is of course riveted in place) just inches from the fuel lines, a tidy arrangement for the bloke seeking to become a human cannonball.


Anyway, once you have sorted these items you may want to invest in a Laminar Lip, I am so happy with mine that the company is hosting a KingCast Motorsports video on the subject http://www.laminarlip.com/vidlinks.php


Note that I'm not bitching about the too-soft fork springs or any other routine maintenance items like the rear shock linkage that turns to dust if not maintained, just engineering and manufacturing defects that should have been sorted before the machines hit the market. And the Triumph Internet mafia will strike you down lest you protest too loudly, as if you're not allowed to disparage the marque. Well I'm not one to blindly adhere to convention, so I tell it as it is. 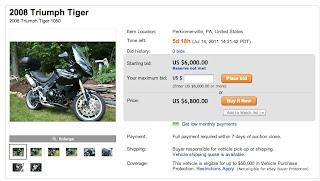 Do I recommend Triumphs to people in general? Hell yes. Will I buy another? Probably so, a 2007-2010 Tiger 1050 (video) is the likely choice. I dig the Bonnie and the Thunderbird as well. But of course with what I spent on all the bullshit for my bike plus the cost of my bike (I paid market rate) I could have just about bought the Tiger in the first place. Nice.


PS: I will say this..... the bike runs so much stronger now and I realize why it smelled rich at times it was because there wasn't enough spark. This is why I had to downshift to blast those Harleys at bike week LOL. No disrespect guys Harleys are cool, I want one.


One week later:   Aaaaahhhhh but it's not over yet, folks. This little motherfucker is still committed to breaking my wallet:


Then on the Tribulations of riding a Triumph, I again see the check engine light on, and it is cutting out under load. It ran like a demon to Nashua and back yesterday (where I was hassled by a jerkhead LE) and I just replaced the battery, rectifier/regulator and stator last week. No I didn't have it on a trickle charger but I goddamn shouldn't have to after all of that. I think I'll be in a position to buy a 2007/8 Tiger 1050 soon (like the white one in the picture below), and when I do I really won't be sad to see this m_______f________ out the door. I have never owned a bike that made me as proud to own when running nicely, excepting maybe the RD 350. Fun as it is when it is running properly, with a shattered crankshaft, dodgy electrics and various other maladies despite careful maintenance from me and a clean bill of health at 12K miles right before I bought her, Bessie has been a real recalcitrant bitch. If I get trouble out of the Tiger I'll never buy another Triumph again. I need my bike to be on the road, not in a goddamn garage, thank you.

9:30p update: Looks like it could be the crank sensor, or some other bullshit connectors.
One writer asks, "is this just a Triumph problem?"

I say you know, I don't really know, all I know is this is the most well cared-for bike I have ever owned, and the least reliable or dependable. It's been a f____ nightmare, honestly. And oh, the crank sensor? That will be another $150 or so.... if that's what it is... f____ bloody hell this beast. I'm not saying don't buy one. I'm just saying mine has been a M____ F_____ nightmare on wheels. I'll keep a spare jug of that oh-so-nice Motul motor oil I use for this bike because my sensor tells me where Triumph's crankshaft is going. Fokkers. I could have bought a Haybusa... but nooooo..... I had to go for something interesting. Oh but wait....there is a bulletin...  and another, and another....  time for the Tiger, F_____ this noise. 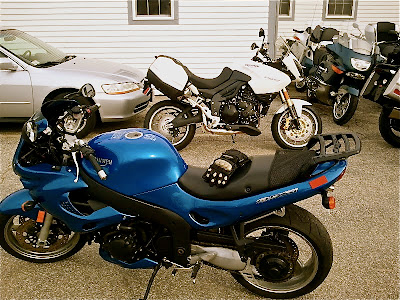 Posted by Christopher King at 8:47 PM

Its not good having a failure such as this. I have a 2000 Sprint so not sure if mien is in the same period but it does worry me as my cash is very limited. Ive never heard of any other bike with the same problem. Good luck with the repair or path you take I will read this with interest
Mike

I cannot guarantee anything Mike but I am 99% sure you won't have that issue. It is an issue with the baking or peening of the crankshaft combined with the sprag clutch, could also involve intermittent charging problem because the Regulator Rectifier is suspect.

Your engine and my engine are different. The '02 model and onward was different.

Ride your Triumph proudly, I do.

It is Friday 7 Dec. and waiting to hear from Triumph and their counsel.