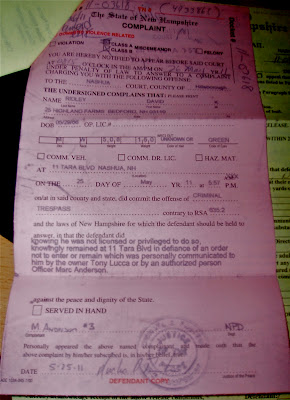 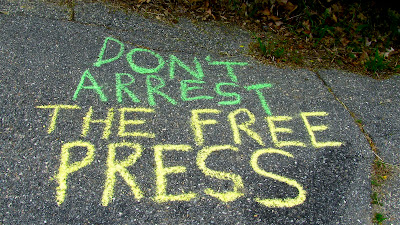 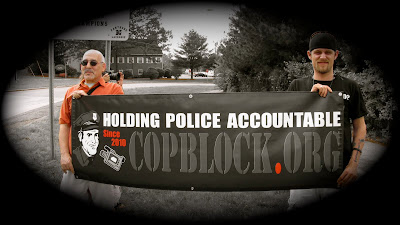 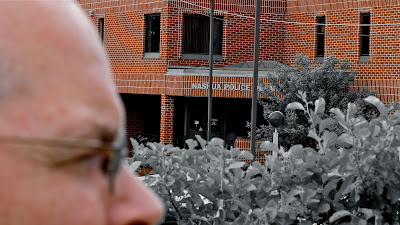 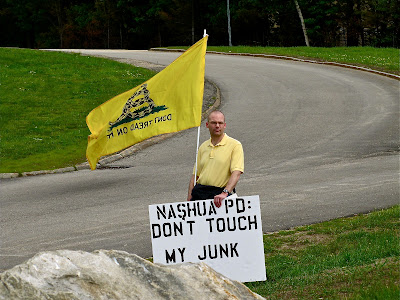 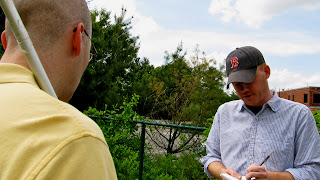 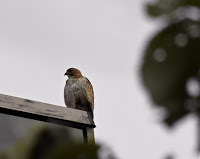 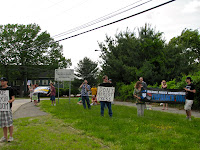 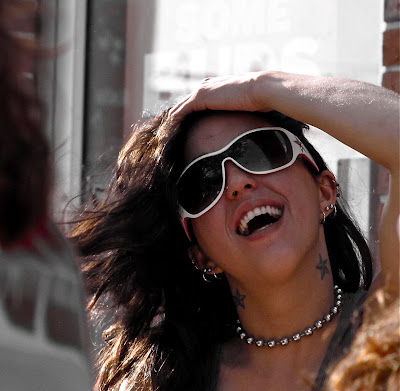 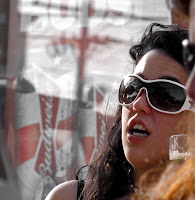 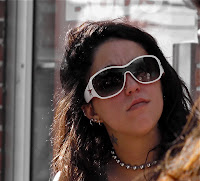 
Well okay my old friend Chrissy isn't really a rock star, she just looked like one yesterday in her $20 Spencer Gift shades so I'm joking, LOL. But the wrongful threats and arrests of reporters that Nashua PD doesn't happen to like is no joke, as will become clear in my movie set for Tuesday, and in the movies from CopBlock.org, LibertyOnTour and Ridley report. Actually Ridley did a quickie upload yesterday here is the link. According to Mr. Ridley the Nashua PD on site at last week's Joe Biden event actually goaded the hotel into the whole thing, everything was going along just fine. Ridley was busy being a citizen journalist (as if the Founding Fathers and pamphleteers intended for any such distinction between "citizen journalist" and "mainstream lapdog press") for quite some time before the LE approached the Radisson and asked them if they needed help getting rid of Ridley.
Here is the KingCast main Ridley Report arrest link, soon to be replaced by this one when the new KingCast movie is wrapped and loaded. The point I made to Telegraph Reporter Mike Brindley and the point with which all of us concur is that our government is bringing different sorts of groups together as we focus more on or commonalities rather than our differences. Many Free-Staters had no idea that I was going through a similar battle with Nashua PD and former NH AG cum U.S. Senator Kelly Ayotte.
But all of that is about to change.
So here we come together on Memorial Day to recognize those who have fought and died to provide us basic Civil Liberties in the United States. We recognize that a free press is one of the hallmarks of any civilized society, and we recognize that in New Hampshire -- the Live Free or Die State -- that oppressors like Kelly Ayotte, Nashua PD and all of their respective attorneys couldn't give a flying f*** about any of it. They are complete hypocrites who have sold their souls for a steady paycheck and they don't really give a damn who they oppress in order to earn it so they can pay off whatever bank they believe holds their mortgages... but I digress, that's the subject of my Mortgage Movies Journal.
In any event we are here to help make them give a flying f*** about ALL OF IT.
Posted by Christopher King at 7:35 AM

I also met a young lady who is going to Boston to testify about the abuse and wrongful arrest she sustained at the hands of "Nashua's Finest."

More on this at a time appropriate.

Whether or not he had any role in it, I notice he was silent on what happened to Michael Holman.

That fiasco was, and is, simply inexcusable.

Same way that what they did to Ralph Holder was simply inexcusable.

And not to mention Dave Coltin.

The State of NH will use children as an excuse to get you into the criminal system quicker than you can say "abuse of discretion" take your money and slam you when you protest, even while your children sustain neglect and abuse in a bad home.

It's all part of the prison industrial complex, a spinoff of the industrial military complex. Having been part of it as a state attorney sometimes I feel like I need to repent, that's why I come here.