KingCast asks, "Who is Blaine775 and did he join YouTube for the express purpose of trying to suppress Senator Kelly Ayotte's lies in the Franconia Liko Kenney-Greg Floyd-Bruce McKay shootings?" 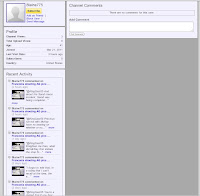 Read the tete a tete between us in the video comments. That's all I'm going to say for now and that's what I asked him as I wrote him, inter alia:
@Blaine775 Also did you join YouTube for the express purpose of query into this case? Your channel has 3 profile views, probably from me, zero﻿ uploads, zero upload views and zero subscribers so naturally I'm curious.

@Blaine775 You're not making much sense here, mate. Of course the fact that the same cop who had your ass beat for no reason while you were asking for backup gives you reasonable fear and apprehension when he violates﻿ the OC Spray and protocol that I have proved that McKay violated. It's also in the local newspapers. And of course the fact that McKay threatened not only your best friend with his hand on the butt of his gun, but scared other people with no legal run-ins is relevant. to mens rea.
@Blaine775 I bring up Sarah because McKay violated protocol then too. He moved to arrest her before conducting any field sobriety tests, then as per his usual, he got out of hand and lost control over the situation, no other LE in North Country has that problem. You forgot to mention the innocent girl who went to the﻿ hospital when he OC Sprayed Ryan Hartford on a bogus case, or Ms. B's privates he flashed a knife to, were they belligerent women as well?
What about his ex-wife with the TRO?
Related: Local lawyer and ski instructor Troy Watts' email to me, (3rd link) "KingCast... You da Man!!!"
Posted by Christopher King at 3:44 AM