NH Supreme Court slams Deutschebank for insufficient documentation yet lower Court Judge allows Wells Fargo to, ahem.... forge on ahead in the Jeanne Ingress case in the presence of a bogus 60 Minutes/Linda Green/Lynne Szymoniak assignment and only the oral representations of counsel as to valid Holder in Due Course status. See video at bottom, along with another video in which the same issues are manifest in the Leslie Crepeau case in which U.S. Trustee Lawrence Sumski decried my YouTube videos; just means we're doing something right. I will be filing an amicus ethics complaint next week on the Ingress case.
Keller-Rohrback  reports that the New York DA filed suit this week against Deutsche Bank and announces their investigation of JPMorgan Chase Bank (NYSE:JPM), Washington Mutual (NYSE:WAMUQ), Bear Stearns Residential Mortgage (NYSE:BSC), Bank of America (NYSE:BAC), Countrywide, Citigroup (NYSE:C), and HSBC (NYSE:HBC), among others.....
Lynne Szymoniak sent me her latest a couple of weeks ago on Deutschebank, securitization and foreclosure fraud, quite the read:
(7) Analysis
The Analysis Section, pages 374 – 375, states the following clear
condemnation of Deutsche Bank’s practices:
Deutsche Bank was the fourth largest issuer of CDOs in the
United States. It continued to issue CDOs after mortgages
began losing money at record rates, investor interest waned,
and its most senior CDO trader concluded that the mortgage
market in general and the specific RMBS securities being
included in the bank’s own CDOs were going to lose value.
And lastly, when it comes to ponzi schemes remember that NH AG cum U.S. Senator Kelly Ayotte was found negligent in the largest consumer fraud scandal in New Hampshire history the FRM debacle. None of which is surprising because
she ignored me when I went to her office when someone forged my name to a mortgage and faxed it off for funding (to WAMU IIRC). Documents seen at the above link. The last time I checked that's called wire fraud. Now she is a U.S. Senator. Reminds me of the Elvis Costello song because I want to know who is "Watching the detectives." 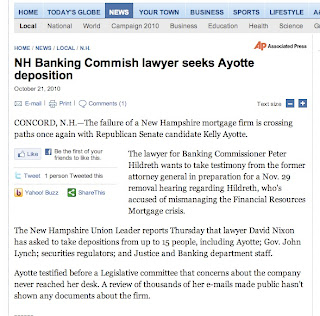 Posted by Christopher King at 5:34 AM