Senator_Kelly_Ayotte_lied_in_her_Motion_to_Dismiss_KingCast_free_press,_racial_lawsuit. Senator Kelly Ayotte, followed by Nashua PD. The other two for the GOP and Friends of Kelly Ayotte are substantially similar to Ayotte's.  They have some high dollar big baller lawyers fighting for them, a team of 12 lawyers, clerks and interns and that's just who is listed on court files. Versus little old me. Well, little old me and appeals to common sense and to SCOTUS, ahem. I love how this is setting up, starting with the blatant disrespect for judicial appearances of impropriety, with Magistrate Landya B. McCafferty taking the helm to issue bogus findings of fact. McCafferty and Ayotte both worked under Ayotte lead counsel Jack Middleton, who is a founding Partner at McLane, Graf et al. Ayotte and I believe McCafferty also worked with Jennifer Parent who is Middleton's co-counsel. Outgoing Magistrate Muirhead trained McCafferty, he is from McLane, Graf. Whoa. Motion for Recusal per 28 U.S.C. §455. 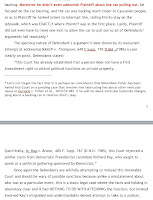 In Massachusetts Judge Tauro stepped off the notorious Mavroules case for much, much less than that but in NH they thought they could get away without even mentioning the association to me. Now as Bobby Knight says, I did not come here to fuck around but don't take my word for it read it yourself, United States v. Mavroules, 798 F. Supp. 61 (1992). SCOTUS ain't gonna like that, particularly since Kelly Ayotte said Justice Elena Kagan (whose folks follow my Tweets, ahem) was not qualified to sit on the bench. But as the song says, what you give is what you get, straight from New Hampshire, a State called malice.... Now That's Entertainment! Jam on.


"Now I am not here to fuck around this week. You may be, but I am not.....This is absolute fucking bullshit....Now I mean you will not put me in this position again, or you will goddamn fucking pay for it like you can't fucking believe."

Kelly_Ayotte,_Nashua_PD_and_GOP_lied_in_Free_Press_lawsuit.
Posted by Christopher King at 5:43 AM

I will echo the exact quote from the Nashua police, when you called to let them know you were about to file this suit... "GOOD FOR YOU, CHRIS."

Unfortunately those were the sentiments of a rank and file officer, the Big Brass/Chief Conley is taking the hard line.

Whatever, he can take that hard line all the way to SCOTUS.